You are here: Home › Features › Aussie Officers To Run The London Marathon Major Bram Cassidy and Captain Dale Murray, pictured above after a run during the Still Others conference last December, are preparing to run the London Marathon with The Salvation Army charity team to help fight human trafficking.

The team will be raising funds for The Salvation Army’s anti-slavery and anti-trafficking work based in the United Kingdom with the Republic of Ireland Territory (hyperlink anti-human trafficking service).

Each year 35,000 runners take part in this world-famous event, and thousands of cheering spectators line the iconic 42km course through central London from Blackheath to The Mall.

A Salvation Army charity team has taken part in the London Marathon for 10 years, with a different Salvation Army project chosen every year to receive funds raised by the marathon runners.

“This year, funds raised will be specifically allocated to the Victim Care Fund,” explained Charlotte Cox, from The Salvation Army Community and Events Fundraising Unit in London.

“To support these victims, The Salvation Army provides and coordinates safe houses and outreach support. We help those who have broken free, to stay free, offering a listening ear and practical solutions.”

Modern Slavery exists in local communities throughout the world – including Australia. Vast numbers of men, women and children are treated as commodities – bought and sold to satisfy the greed and desires of others. The Salvation Army’s anti-trafficking work supports individuals to build a new life and protects and cares for vulnerable victims of modern slavery.

Every year, runners from around the UK join #TeamSallyArmy for the London Marathon. “This year, we are excited to welcome runners from Australia, the USA and the Czech Republic,” said Charlotte.

“We are thrilled to have both Major Bram Cassidy and Captain Dale Murray on the team and we cannot wait to cheer them over the finish line!”

Bram and Dale will be the first Australians coming to London specifically for the marathon.

Australian Salvationist Sarah-Jane Alley has also run the marathon when she was based in London.

Bram and Dale share their thoughts on the adventure ahead of them:

Bram, the Area Officer for Metro East in Victoria, has been involved with running since he completed the 14.4km Good Friday Appeal “Run for the Kids” for the Royal Children’s Hospital in 2011. 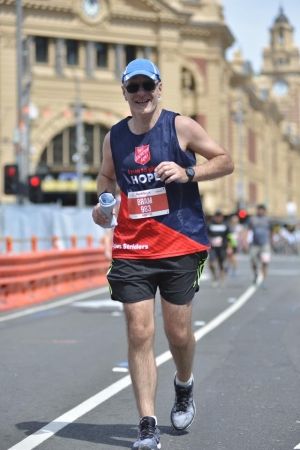 Major Bram is preparing for the London Marathon.

“I got hooked on event running with the crowds, the people, the vibe, and now do parkruns every week. It’s a great opportunity to meet people who I would never meet otherwise, take my faith and who I am into the community, stay fit and have fun!

“I don’t want to live in a Salvation Army bubble and this is a great way to get ‘salt out of the salt shaker’”.

On 9 February, Bram will complete his 250th parkrun, as well as numerous 10km and half marathon courses.

Since being accepted for #TeamSallyArmy, Bram has run the Melbourne Marathon.

“I’m an ‘adult onset’ runner,” he said with a laugh. “I ran the Melbourne Marathon just so I could say the London event wouldn’t be my first!

Bram is on track with the 16-week preparation program and will complete 64 runs in the lead-up to the London run.

He has also been learning about the anti-trafficking and anti-slavery work of The Salvation Army in the United Kingdom that will be the beneficiary of funds raised by the Sally Army team.

“This terrible problem has always existed and now is far more sophisticated and intertwined into everyday life than ever before,” he said.

“I am privileged to help break down the myths that slavery doesn’t exist anymore, but rather is part of urban life today – and to be part of contributing to the work of helping those impacted. I look forward to speaking more about the issues and raising awareness as well as funds.”

Dale, Toowoomba Corps Officer, only heard about a vacancy on #TeamSallyArmy last December. Captain Dale Murray is about to run his 17th marathon.

With 16 marathons already under his belt, Dale applied immediately and was delighted to be accepted.

“It’s one of the world’s five major marathons and so a significant running event and opportunity,” he said.

“It will be my 17th and first overseas marathon. I’m really looking forward to it for three main reasons: I get to combine my love of long-distance running with a major international event; I have the opportunity to raise funds for The Salvation Army in the United Kingdom against human trafficking and modern slavery, and the protection of women and children has long been a passion of mine; and I get to represent The Salvation Army, an organisation that I love and am a minister in, on the world stage.”

Training has already begun for Dale, who began the process 16 weeks out from the marathon.

“Although I’ve run 16 of these and know what to expect, each marathon is unique and brings its own challenges,” he said.

“It will be great to run around London and just enjoy the fabulous aura of the whole event. If it’s possible, I would also like to see first-hand some of the anti-trafficking programs The Salvation Army runs in the UK.”

Each charity team participant is required to raise close to AUD$5000 that will go to The Salvation Army’s anti-trafficking work.

“It’s my responsibility to raise this money, and all other costs are my own personal expense,” said Dale.