You are here: Home › Features › Balga The One Door Corps 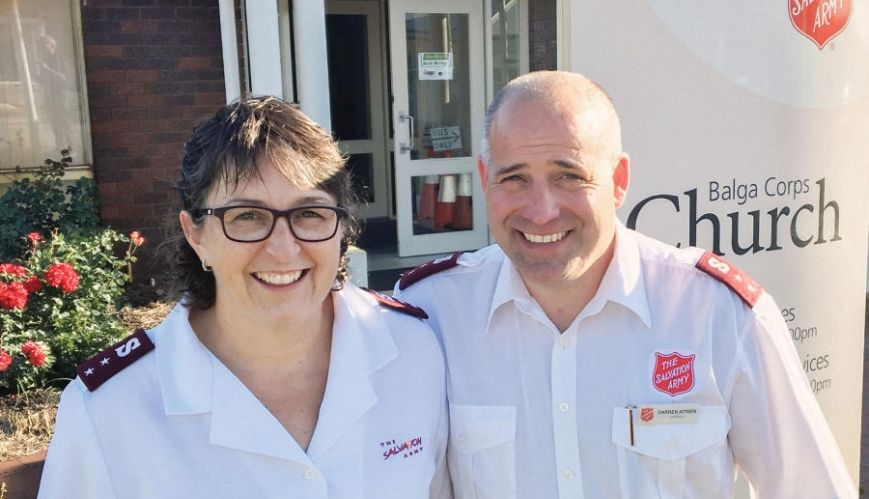 Captains Darren and Megan Aitken, Corps Officers at Balga in Western Australia, where many have found love and acceptance. Photos: Murray Jongeling

She was born a Buddhist; he a Muslim. But they worship together at The Salvation Army every Sunday. The interesting couple are Limun Mong and Shaiful Shafiq Bin Shaifri Bahri. Both were born in Malaysia.

They reached out to the corps two years ago shortly after arriving in Perth on a tourist visa – because they were in need.

They have stayed and become involved in the corps – because they were assisted to rebuild their lives and felt accepted. Limun is now a Christian. She first had contact with Christians in Malaysia. But her faith has blossomed at Balga.

Shafiq – they call him George for simplicity at Balga – is “making progress”. Their daughters have been dedicated at The Salvation Army. Limun is a regular volunteer worker with the corps emergency relief program.

George works three days a week as a cook in the corps’ Early Learning Centre kitchen. “I think we belong here,” George says. “Of course we do,” Limun interjects. 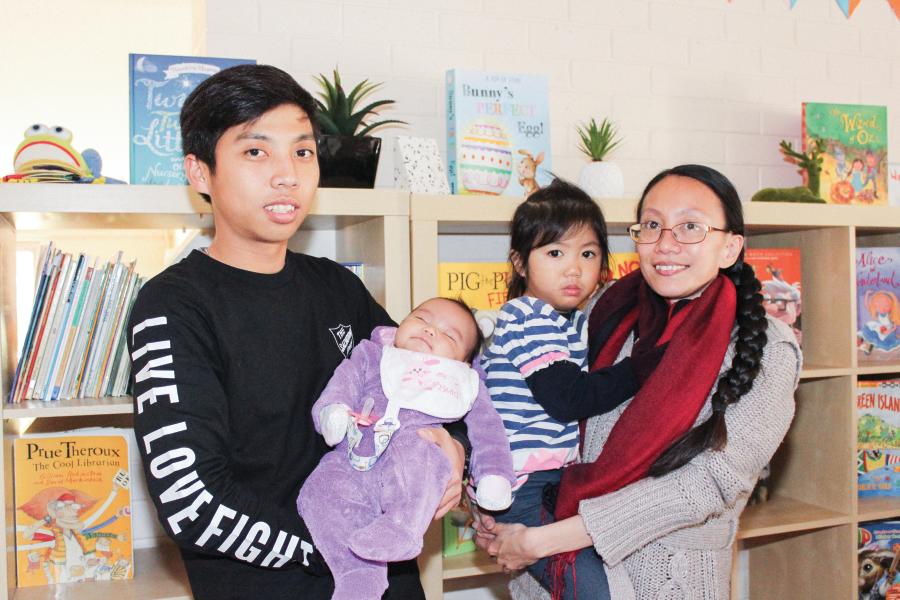 The couple (pictured right) have been unsuccessful in their application for a protection visa, which would allow them to stay in Australia. They are now awaiting the outcome of an appeal.

“We’re praying,” says the Corps Officer, Captain Darren Aitken, who has been at the corps for almost four years with his wife, Megan. “The whole corps is praying,” he says. Balga is a progressive corps.

Lots of things happen at Balga. “We are a one-door corps,” says Darren. “You come through the front door to access all of our services. Everything is on one site.”

By that, he means as well as traditional corps activities, Just Brass, Mainly Music, Early Learning Centre for children six weeks to six years, Child Health Centre, emergency assistance (Doorways) and management of a housing project, which involves more than 80 properties rented to clients in the community.

In total, Balga employs about 25 people on a permanent basis and has an army of volunteers. “We’re an outward-looking community corps that links people from the community to Christ through the various services we offer,” Darren says. “It’s that early-Army vision that William Booth had of the Army being at the centre of the community.”

Limun and George – and their children – are just one example of a family linked to Balga through initial assistance with food and accommodation, to referral to the Early Learning Centre and now employment. 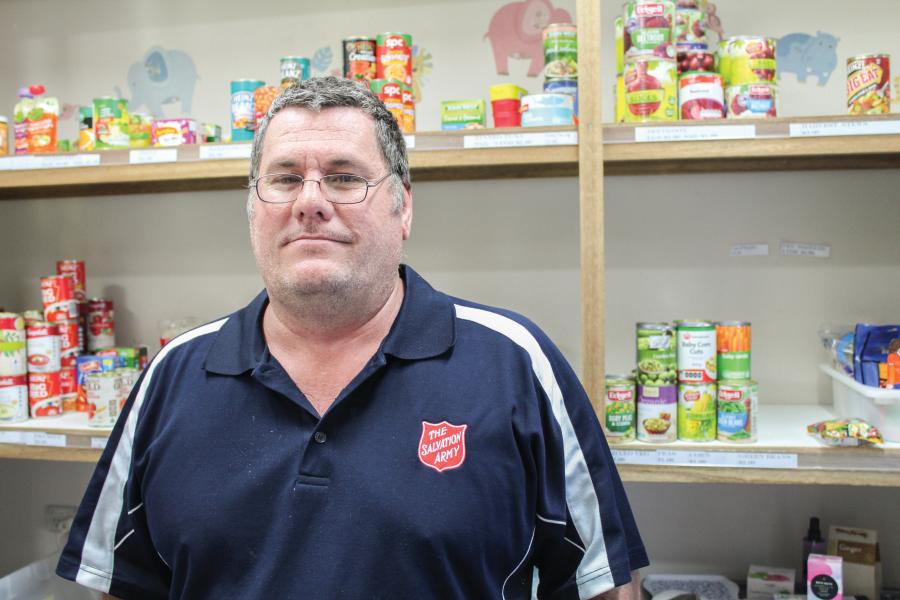 Jodi and Graham Glew (pictured right) are another couple who sought assistance from Balga Corps and are now intimately part of the family. Graham lost his job with a trucking company last year.

The loss of income impacted on their ability to pay rent. The Salvation Army, through Balga Corps, helped them through a tough period. “We felt just so accepted by the people here (Balga) that we started coming to the services on Sunday,” Graham says.

They knew that Balga would be their spiritual home, so they agreed to get married “in the presence of our friends here”, according to Graham. “Because the people here treated me and Jodi as family, I wanted to volunteer; to do something to repay the people for helping us,” he says.

He volunteers almost every day at the corps, from collecting fruit, vegetables and bread from a local supermarket to provide to people calling at the centre for emergency assistance, to providing toasties to clients and sorting food as it comes in from Oz Harvest.

“I do almost anything that needs to be done around the place,” Graham says. “This corps has been good to me and I want to do what I can to pay back the kindness I received when I was in need.”

Jodi attended Balga Corps as a girl and is certain in her faith. Graham has been working through understanding the Christian faith and The Salvation Army with Darren. “I’m getting close,” he says.

In an impressive publication to showcase their corps, they remind readers of The Salvation Army’s National Vision: “Wherever there is hardship or injustice, Salvos will live, love and fight, alongside others, to transform Australia one life at a time with the love of Jesus.”

The National Vision is their personal vision. The Balga Corps leadership and membership supports the vision – as mission.

“The Salvation Army Balga Corps Network has walked alongside thousands of people who struggle through hardship and injustice on a daily basis,” the Aitkens say. “We have fought alongside people who have no voice and no hope, and we have been blessed to see positive transformation to individual lives – children, adults and families. We are so proud of the incredible efforts that the Balga Salvos team have given through their dedication of time and energy in living out our theme of ‘open to receive all that God has for us’ and embracing New Beginnings.”

Hundreds of individuals, couples and families are currently being assisted through Balga programs to afford their own accommodation, keep their little children healthy and educated, ensure adequate food is available, find employment – and friendship. 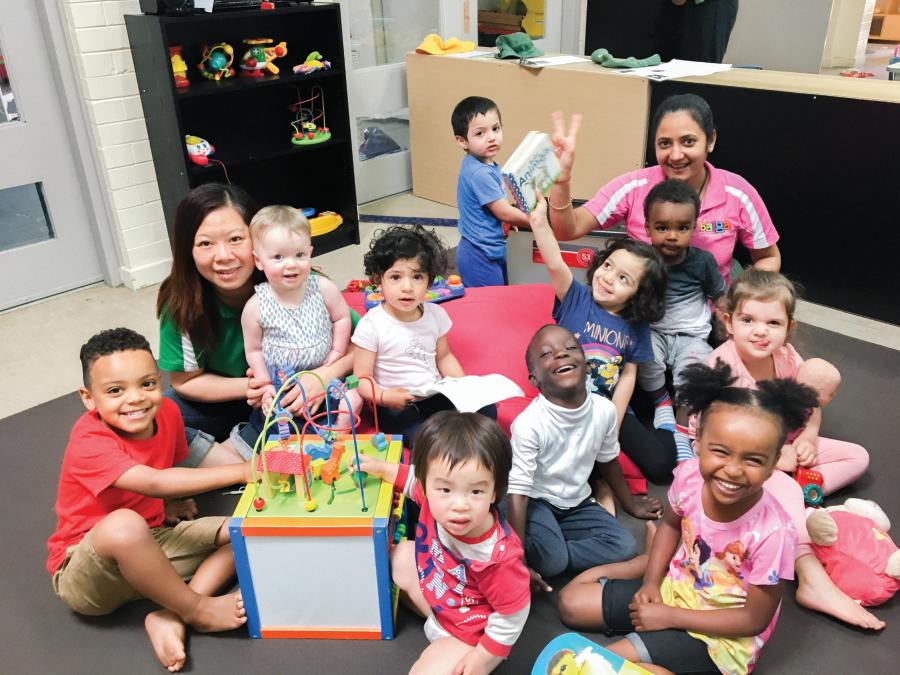 The Early Learning Centre is one of only three or four in The Salvation Army in Australia. It employs 16 qualified staff and can take up to 50 children per day.

It is the only child health centre in The Salvation Amy. Corps-based housing programs, operated in consultation with the Western Australia Housing Department, employ four case workers who not only assist low-income earners to find affordable rental accommodation, but equip them with life skills.

A professional hairdresser provides free haircuts and styling two mornings a week, and a community garden is available to anybody who wants to grow their own produce. The community garden has a coordinator, who runs help sessions for local families each week.

Mainly Music and Just Brass attract large numbers of children, young people and their families. Every program at Balga is deliberately designed so that everyone new to a corps service feels accepted and comfortable and once supported and empowered, to move on independently to other faith pathways within the corps.

As Captain Darren Aitken told us, “Everyone comes through the front door.”