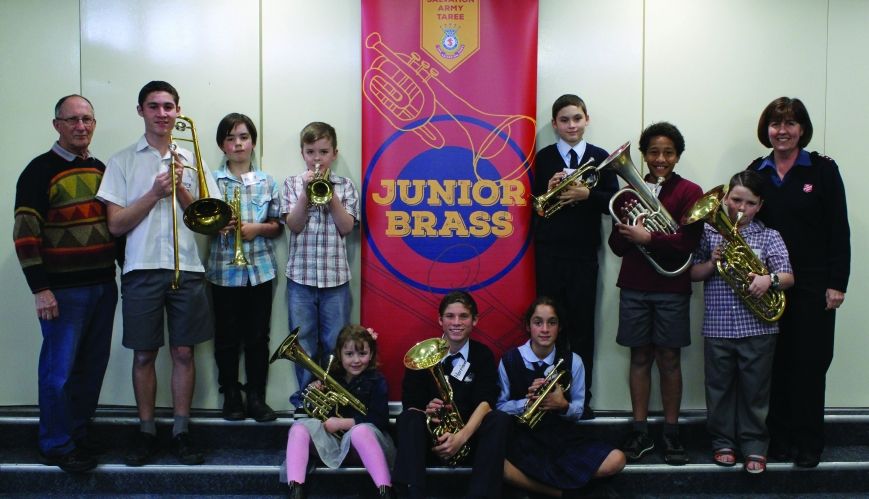 Luke Geary is proud of Salvos Legal Humanitarian’s record of handling more than 20,000 free cases over the past decade.

Take a good look at this man. His name is Luke Geary. In generations to come, whenever Salvation Army history is written about or spoken of, his name will still be mentioned.

His link to The Salvation Army spans only the past 15 years and he is only 37 years old, yet he already is a Salvation Army pioneer.In 1890, Salvation Army founder General William Booth, in his book In Darkest England and the Way Out, wrote of a dream. Booth spoke of having the Army establish a “Poor Man’s Lawyer” service, providing free legal advice and representation to people who could not afford it.

In 2010, Luke Geary – then a little-known Sydney lawyer – left his legal practice to start Salvos Legal, based on Booth’s model. It was the first legal service of its kind offered by The Salvation Army anywhere in the world. It’s odd for modern-day Salvationists and supporters to contemplate, but we have been here when history was being created. And, when the Army’s first permanent legal service is discussed, it will be Luke Geary whose name is most prominent. Absolutely, says Lindsay Cox, a Salvation Army historian of long standing. If anybody knows about the significance of these things, it’s Lindsay Cox. He has been writing about, talking about and advising on Salvation Army history for a long time.

“Luke Geary has made a very significant contribution to Salvation Army history,” says Lindsay Cox. “His is a name that will be remembered.”

In a social media comment on Luke’s impending departure as managing partner of Salvos Legal, Colonel Richard Munn, who was Chief Secretary in the Australia Eastern Territory in 2013-15, said Luke had “created and steered a quite wonderful and innovative venture for our Army”.

Colonel Munn said Salvos Legal was “highly esteemed, even envied, across our Salvo world”. Colonel Munn is currently Secretary for Theology and Christian Ethics in the USA Eastern Territory.

Luke is flattered by the accolades and accepts them “on behalf of the team”.

“But for the huge amount of help along the way, Salvos Legal would not have happened,” he says. “Insofar as we have now hit a milestone of 20,000 cases, I acknowledge that Salvos Legal is a pretty big deal.”

This month, Luke is moving from Sydney to Brisbane for family reasons and will return to general law and his old law firm.

He will, however, continue to work with Salvos Legal as a consultant and voluntary director. In a way, he was an unlikely candidate for Salvation Army prominence.

He was born into a Catholic family in Sydney’s famous Bondi beachside suburb. He was educated at Catholic primary and secondary schools. He completed a law degree at Macquarie University (Sydney), working as a casual bar attendant to help fund his study, before joining a law firm in 2000.

As a Catholic, he attended Mass most Sundays. But it was more a chore than a commitment, he says.

The Auburn Corps Officers at the time were Captains Nesan and Cheryl Kistan. “I certainly remember the day Luke walked into The Salvation Army at Auburn,” says Captain Nesan. “Luke caught the vision and the mission of The Salvation Army, and embraced it completely. Luke, as a young man, demonstrated a passion and willingness to serve the poor and marginalised. His fight for the underdog was one that always inspired me.”

As part of his Auburn association, Luke took part in a program based on Rick Warren’s 40 Days of Purpose. It introduced him to Jesus. Luke became an adherent.

In 2005, he started Courtyard Legal, providing free legal advice to people at the Auburn Salvation Army complex one night a week while still at his legal firm by day. His work spread to Parramatta Corps. In 2007, he was given a copy of Booth’s book to read. But he didn’t get to the Poor Man’s Lawyer part.

In late 2009, he was asked to meet with Salvation Army leadership. They asked him to consider establishing something similar to Booth’s Poor Man’s Lawyer. He agreed. “You don’t get chances like this very often in life,” he told us for this story. “I went on a holiday to India. I think it was while I was on the plane that I returned to Booth’s book. When I read the section on his Poor Man’s Lawyer, it affirmed for me that this is what I should be doing.”

And, so, although having just become a partner in his own law firm, he felt called by God to start Salvos Legal. He was, at the time, well aware that he was turning away from what would have been a very lucrative lifestyle. 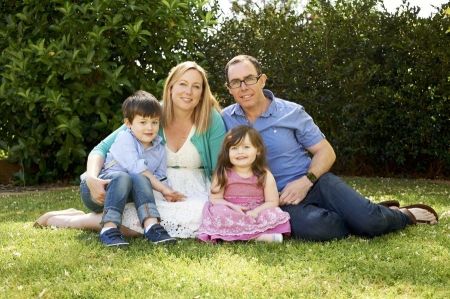 “But we (the family, pictured right) have been well looked after,” he says. “There are no regrets.”

Many were lawyers willing to join his mission. He had considered retaining the name Courtyard Legal. But his wife, Heather, said that Salvos Legal was more appropriate, in the circumstances. So, it was Heather who named the company.

Luke and Heather have two children, Jacob and Cecelia, both dedicated at The Salvation Army (Auburn and Earlwood, respectively).

Today, Salvos Legal operates in NSW, Victoria and Queensland, with more than 40 permanent employees and 250 volunteers. It describes itself as a social enterprise law firm.

It has a commercial arm, which provides a fee for service to large companies, governments, and individuals. It also has a humanitarian division, which provides free legal services to disadvantaged and marginalised people who otherwise would not be represented.

Income from the commercial arm funds the work of the humanitarian division. More than 20,000 cases have been handled by the humanitarian arm, at no cost to The Salvation Army, government or clients. 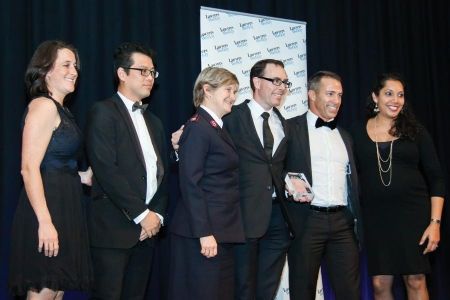 Salvos Legal has won numerous industry awards, including 2014 Australian Law Firm of the Year (Luke and some of his team are pictured right receiving the 2014 award) and most recently 2017 Australian Boutique Law Firm of the Year. In his acceptance speech of the 2014 award, Luke said: “I am convinced that Salvos Legal is the best law firm because everyone there is unashamedly enthusiastic about making money – nowhere else is that possible without notions of greed and selfinterest coming into play. Here, though, it is all done benevolently and graciously, for the greater good, that is, our humanitarian work.”

After thanking many people for their sacrificial support in establishing and operating Salvos Legal, Luke added: “I want to share with you the motivating words of the founder of The Salvation Army, William Booth. In the early 20th century, in his old age, Booth gave a catchcry which embodied his life, his spirit and his commitment to those suffering. It resonates with all of us at Salvos Legal and reminds us of the importance of our work so that we never forget, never become complacent.

A copy of Booth’s In Darkest England and the Way Out sits on the reception desk at Salvos Legal’s Sydney office. It is open at the page where William Booth records his desire to see a Poor Man’s Lawyer established by The Salvation Army. “And it’s a first edition copy,” Luke says. “It’s my inspiration.”