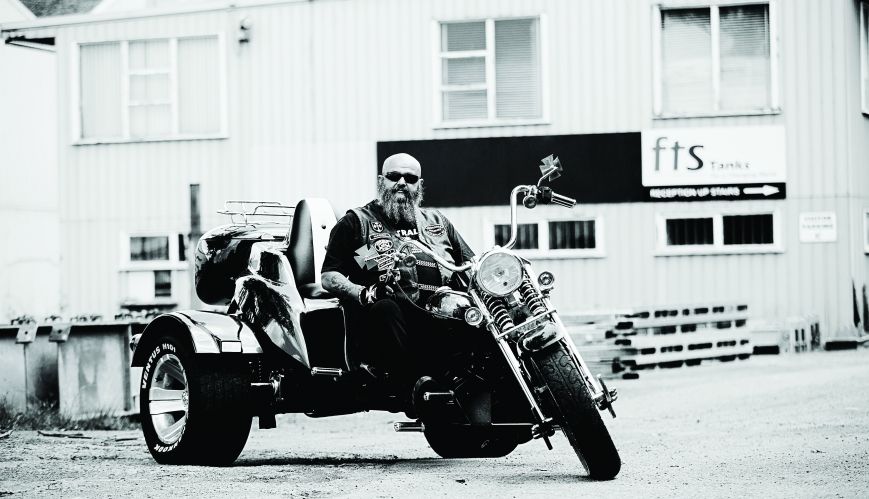 Everywhere you look in The Salvation Army, you see God’s miracles. Look at Simon Adamo. Simon is one of God’s miracles of the 21st century.

Simon was raised by immigrant parents in Sydney’s inner western suburbs in the 1960s. As a child, he was full of hate for a world which bullied him and called him “a wog” because of his Italian parentage.

To him, God was a vengeful, punishing God, waiting to discipline him for anything he did wrong. He blamed God for his circumstances.

In his mid-teens, he befriended a Neo Nazi skinhead who told him the only way to get respect was through violence. He joined an outlaw motorcycle club and deliberately embarked on a violent life.

He made his appearance match his behaviour.

By 19, he was in prison for a violence-fuelled crime. He served three years. For most of the next decade, his life was dominated by alcohol, drugs, hate and anger. Attitudes and actions put him behind bars on several other occasions.

Early in his 30s, he had already had three failed relationships and six children. Life looked ugly. But he was entitled, he believed. People had to pay for his problems.

But then the miracle happened.

At 38, he met Jesus – and in a most unconventional way.

“I was at work one day loading a ute with rubbish to take to the tip,” he tells Pipeline. “On my way to the tip, I had this overwhelming urge to take my two (teenage) daughters to lunch. They were at the same high school.

“I had never in my life had this kind of thought. I arrived at the school. It was the period before lunch. There were kids running around.

“I asked one of the teachers what was happening. I was told there was a guest speaker having a talk to the kids and that he used to be an alcoholic and drug addict while involved in motorcycle gangs and crime.

“I thought I would hang around in case he was someone I knew.”

But the man wasn’t somebody known to Simon. The man was biker Kevin Mudford, who was telling how his life had changed since he became a Christian.

Simon, in his motorcycle attire, sat at the back of the school hall, unbeknown to his daughters.

“Kevin started telling his story. I was amazed how similar it was to my own,” Simon says. “He started to talk about how he had found real peace in his life through Christ.”

Despite his violence-filled life to date, Simon really did want some peace for himself. He desperately wanted to know where to find it.
It was being offered that day at the school of his two teenage daughters. And a middle-aged biker who called at the school to take his daughters to lunch received it.

“At the end of his talk, Kevin Mudford asked that if anyone wanted to come forward and make a commitment of their life to Christ.
“Much to the shock and horror of my daughters, I was compelled to go forward (at a school assembly). I remember looking Kevin in the eye and asking him if he was fair dinkum or if he was getting paid for a scam.

“I could see something in his eyes as he said it was real; that Christ’s peace was available to anyone, no matter about their past.”
That night, Simon took his entire family to a meeting of a Christian motorcycle club, where Kevin Mudford was again a speaker and testimonies of lives changed were given by members.

Again, Simon responded to a call for people to publicly hand over their hurts and heart to Christ.

I had always lived my life with anger and hate in my heart ... I had never felt guilt or shame. But, at that moment, I felt 30 years of guilt and shame for all the things I had done in my life.

“I’m not ashamed to say that I wept like a baby. My partner at the time made some derogatory remarks about my manhood and told me to suck it up.”

But Simon knew that he was free. The peace he was seeking was now his. It was a miracle!

In February, 2014, Simon Adamo works for The Salvation Army. He is an outreach case manager in a new program for homeless men in Newcastle.

This year is his 15th year with The Salvation Army. He attends Westlakes Corps.

The first 12 years were spent managing a dairy farm at the Army’s Miracle Haven establishment (near Newcastle) for people seeking to overcome addictions. The last two years involved working with men in crisis at The Anchor, also in Newcastle.

Simon has retained his biker image not only in private life but also at work, complete with jeans, black jacket, tattoos, beard and dark sunglasses. His jacket is adorned with messages, including Bible verses and a badge which simply states “These ARE my church clothes”.

He rides a biker trike to work – and everywhere else. It’s part of the image. A brain tumour in 2009 prevented him from retaining his motorcycle, but his licence allows him to ride the trike.

“I think the initial reaction is to judge the book by its cover. But I hope that when people get to know me that that opinion will change.

“I remember when new managers came to the farm (Miracle Haven) a few years ago, they saw me and commented to staff that Miracle Haven took lot rougher looking clients than those officers had in a previous similar appointment in Queensland.

“It was something to see the shock on their faces when they were told that I wasn’t a client; that I was a member of their staff.”
His manager at The Anchor in the past two years, Robert McDonald, says of Simon’s appearance: “I believe God uses Simon’s tough appearance but soft heart to reach people.”

“God has blessed me greatly since that night (he handed his life to Christ),” Simon says. “I am not about to say that everything has been easy. My partner at the time left me and I found myself a single parent of four children.

“But my life did begin to change. The first thing I remember God taking was my swearing. I had used swearing to punctuate and emphasise my conversations.

“Then my drinking and drugging seemed to lose their power. I became involved in my local church. For the first time in my life, I actually started to feel some peace in my life.”

He joined the Longriders Christian Motor Cycle Club. They hold church services once a month for bikers who do not feel comfortable in a mainstream church setting.

Club members minister to the outlaw motorcycle scene “more as a presence than God botherers”.

It’s a similar story with men in crisis – men at the bottom of the heap, according to society standards.

“A friend once told me that you don’t have to climb into a rubbish bin to know that it stinks, but if you have been in the bin it helps you to identify certain smells.

“I suppose that having gone through the things that I have helps me to relate to people and that they know I can relate to them.
“Throughout my life, God has shown me that no matter how down we have been in our lives, there is hope through Christ and it’s not hard; you only have to ask.

When I first became a Christian, I was of the belief that being born again meant that I would have to change my appearance that I worked so hard to achieve. But through encouragement of friends, I realised I could use my appearance to my advantage.

“People could see that I came from basically the same background and I could understand the issues they have.

“Through Christ, I believe I have a heart to help people, because if God can make the changes he made in my life, I know he can do the same for anyone who asks.”

Simon is now 55 and still in touch with most of his children.

“God has recently blessed me with a really beautiful committed Christian wife. With her and the challenge of my new position (in Newcastle), I am looking forward to what God has in store for us next.”