You are here: Home › Features › Bringing The Stolen Generations Home In August 2010, I held a conversation over several days with Stan Alberts and Cynthia Munns, children of Indigenous Salvationist Jean Alberts whose funeral I conducted in April the same year.

I had a special connection with them because, as a very young boy, Jean became my “black nanna” when my parents served as the corps officers in Clermont, Queensland. In fact, they thought of me as their white brother.

Our conversation covered the entirety of Jean’s life, including the tragic fact that at four years of age she was “stolen” from her mother and father in Far North Queensland, never to see them again.

To be honest, I’m still not sure whether any of us fully understand the impact of being “stolen” on a person’s life, or that of their family.

I wanted to write about it and had Stan and Cynthia’s permission to record the conversation. Later, I would conduct research into the “stolen generations”.

Sitting around the kitchen table in Cynthia’s home in Rockhampton, Queensland, the siblings wound back to July 1998.

It is not hard now to see this year in my mind’s eye, but nothing could ever bring me to feel what our Indigenous sisters and brothers must have felt in those days.

Jean is 83 years old. It is NAIDOC (National Aborigines and Islanders Day Observance Committee) Week in Australia and the theme is Bringing Them Home, the same title as the 680-page report handed down by the National Inquiry into The Stolen Generations on 26 May 1997.

Tension across Australia throughout the intervening year is now at its peak.

After years of struggle for the recognition of their plight, the Stolen Generations feel some respite has been accorded them; a light is shining on the injustice of their stolenness.

Not everyone, of course, agrees with the inquiry’s findings and recommendations. In fact, inquiry members are being labelled “black sympathisers” by racist hardliners in both major political parties, and anti-Indigenous sentiment is being inflamed by right-wing campaigners.

But Bringing Them Home is a damning report on governmental policy – and its destructive intent – of a race of settlers towards a despised and imperilled Indigenous host.

The subtitle tragically says it all: “Report of the National Inquiry into the Separation of Aboriginal and Torres Strait Islander Children from Their Families.”

Across the nation, shame finds expression through justice agencies, learning centres, The Salvation Army and other churches that, although implicated in the report, are horrified at its findings and already voicing apology.

Both heralded and ordinary Australians cry public tears and express public sorrow and angst at the treatment of their fellow human beings – tears and sorrow that find their way like a river to the highest offices of the nation, its states and its territories.

Ministers with an ear on the nation’s heartbeat, and a sixth sense for the sentiments of the world as it watches, realise that Bringing Them Home is a point of no return for Australia.

Whether they agree or not – in a world that increasingly embraces equality – race and policy should never again be considered together. The report estimates that between 1910 and 1970, somewhere between one-in-ten and one-in-three Indigenous children were forcibly removed from their families.

But it shows how forced removals had gone on for much longer – for more than 150 years – even into the 1980s. It concludes: “Indigenous families and communities have endured gross violations of their human rights. These violations continue to affect Indigenous people’s daily lives. They were an act of genocide, aimed at wiping out Indigenous families, communities and cultures, vital to the precious and inalienable heritage of Australia.”

Genocide! I tell Stan and Cynthia that I remember being incensed by the inquiry’s findings and even more incensed by people who, in the press, called the report an exaggeration.

Bringing Them Home contained irrefutable evidence of a policy aimed at killing off an entire race of people by breeding out their Aboriginality. This served the nation’s overarching White Australia policy.

“It was a demonic plan destined to fail,” Cynthia says at the table with an overwhelming heaviness in her voice. “We are human after all.”

Of course, she’s right. Bringing Them Home documents hundreds of case studies that show the short and long-term trauma of forced separation. Loneliness, loss of affection and identity, deep grief and depression accompanied being stolen, both on the children and on the families and communities from which they were taken.

It was an unspeakable and damnable act that caused unknowable psychological impairment to an entire race, often resulting in mental illness and life-destroying substance addictions. “Stolen Generations children were deprived of family life and, in turn, many were unable to parent their own children successfully,” the report says.

From shame to celebration

By 1998, Jean had lived for 11 years in Rockhampton – one of the six Queensland locations in which the inquiry conducted hearings. The regional hub, then home to more than 70,000 people, had become a place of refuge for many Aboriginals over a long period of time.

This natural migration from the bush had become evident across Australia. Accessibility to services, particularly, was increasingly important. The impact of Bringing Them Home on the city was palpable. A strange mix of vindication on the one hand, and anger on the other, filled the town and its daily newspaper, The Morning Bulletin.

Mostly, the town was shocked by the findings of inquiry Chair Sir Ronald Wilson and his commissioners, reflecting an ignorance about the Stolen Generations that had pervaded most of Australia.

Bringing Them Home changed the nation’s attitude towards its Indigenous peoples – from one of ignorance and secrecy to one of celebration. 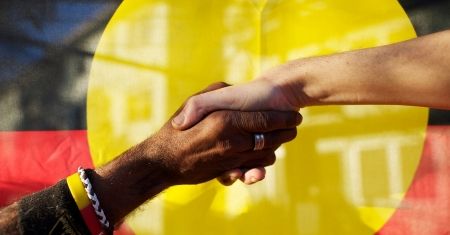 On 26 May 1998, 12 months after the handing down of the report, Australia’s first National Sorry Day was held.

Jean had become a much-loved Rockhampton Indigenous Elder. “Everyone loved Mum,” says Cynthia, “and that year I remember one of the schools invited her to a NAIDOC Week ceremony. She got the surprise of her life when, upon arrival, she discovered that she was the guest of honour.

“Mum was one of several local Indigenous identities celebrated in Rockhampton that year. When I say ‘identity’ about Mum, I don’t mean like a ‘celebrity’, but ‘identity’ in that everyone knew her and everyone loved her, even many European folk.

Some of her grandchildren attended St Joseph’s School in North Rockhampton. Old Nanna, as she was known, became a regular face at the school, serving on the tuck shop until she was 75 and showing up at everything from sports days to school fetes to grandparent’s days until well into her 80s.

“I remember on this day, she was the focus of the whole school. It was a NAIDOC Week celebration and they had decided to celebrate the life of Jean Alberts. We were all so moved by it, and proud. She was brought out the front of the whole assembly, interviewed by some of the students and presented with a NAIDOC Week award and an enormous bunch of flowers.”

Cynthia relates how the school presented a song and a poem in honour of “Old Nanna”. A part of the event was recorded on video and produced later as the school’s “response to the Bringing Them Home report”, dedicated “to Old Nanna Alberts and all those who were of the Stolen Generations”.

Cynthia gets up and motions for me to follow her. We move to the lounge room. She pushes a disc into the DVD player. We sit down. She presses play and there is Salvationist Jean Alberts interacting with schoolchildren, white and black, answering their questions about her life as a stolen child, receiving their respect and affection.

The children ask: “Did you wear shoes?”, “Did you have a house to live in?”, “Did you sleep in a bed?”, “What sort of clothes did you wear?”, “Did you miss having your mum and your dad and your family around you?” “No, I didn’t have shoes when I was your age,” Old Nanna responds, “and sometimes I had to sleep on the ground. I wore calico dresses. They were fine, but nothing like what you are wearing. And yes, I missed my mum and dad terribly, but I was lucky. Unlike many other stolen children, for as long as I can remember I was well-treated by those who looked after me.”

The camera pans to the school choir about to sing Home At Last, written especially for Jean by two staff at the school. Cynthia pauses the film to explain that one of the children singing in the choir is a great-granddaughter of Jean’s. She points her out and presses play again.

Across the room, Cynthia is struggling to watch and listen to the choir. She’s conscious of her welling tears. It’s been a huge time of remembering, and I wonder if we should stop.

Stan has left to attend to other family business. I begin to get up but she motions to let the film continue. I am struggling to keep emotion under control.

I go to the kitchen where I had noticed a box of tissues and get them. A kind of sacredness has taken over the lounge room, like we’ve been transported to holy ground.

Out of all Old Nanna’s 12 children, Cynthia alone shares the strength of her mother’s faith. In these sacrosanct moments we both realise that Old Nanna Alberts’ life had gone full circle.

If Eddie Mabo’s native title fight and Patrick Dodson’s drive for reconciliation were the storms that started the change in how Australia viewed its Indigenous people, then Bringing Them Home became the cyclone that changed our minds forever.

Their treatment at the hands of white Australia became the nation’s shame. Reconciliation was rushed to the top of the nation’s social agenda.

More than any other previous influence, the report served to validate the historic 1992 High Court Native Title decision in the public eye, giving a much clearer and less protested pathway for future land grants.

The last 13 years of Jean’s life were punctuated by government apologies – from state parliament and territory assembly apologies to those of corporations, churches and other not-for-profit groups including The Salvation Army.

One of the recommendations from Bringing Them Home was that Australian parliaments “officially acknowledge the responsibility of their predecessors for the laws, policies and practices of forcible removal” and that these parliaments, state and territory police forces, and churches and non-government agencies that played a part in forcible removal apologise.

Not only are they to apologise, but they are to negotiate the words of their apologies with the Aboriginal and Torres Strait Islander Commission and participate in commemoration or sorry ceremonies where deemed appropriate.

It was also a time marked by mounting pressure for a national apology, and an extraordinary attitudinal change occurred across the nation towards Aboriginal people and their culture. “Suddenly, we began to feel celebrated and respected,” says Cynthia and, in these surreal moments, indicates that she’s going to tell me something she doesn’t think she’s ever told anyone else.

“Bringing Them Home made a huge difference in all of our lives. It was like suddenly we were free; we were normal citizens, equals, no longer low-class human beings compared to everyone else. It was really only after experiencing this kind of freedom in our spirit that we realised how much of a cloud of depression we lived under.

“It was like we were liberated,” says Cynthia. “After NAIDOC Week 1998, Mum felt like a bird whose wings had been unclipped. She could really fly, and no longer pretend.”

Watch this interview with Jacqui Stringer about ministry with the Indigenous people in Ipswich, Queensland and the important role that cultural, art and belonging play in this community.