You are here: Home › Features › Bush To The Beach In One Powerful Prayer

Bush to the beach in one powerful prayer 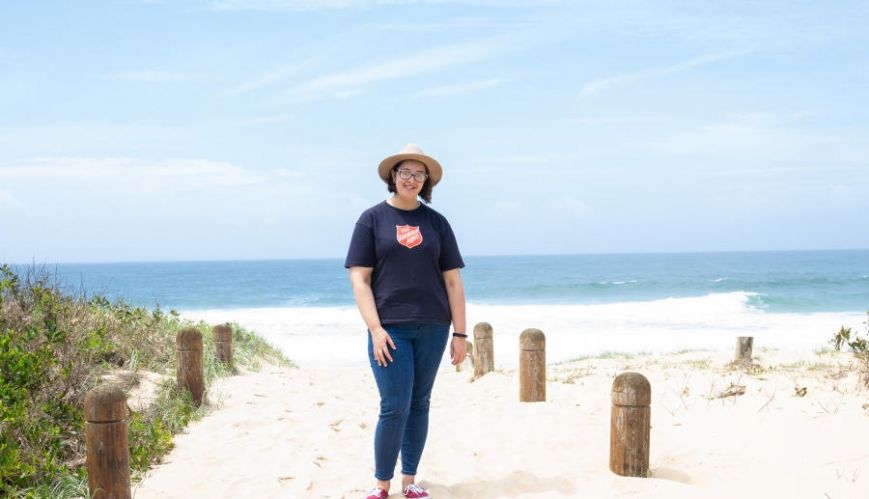 Bush to the beach in one powerful prayer

The coastal city of Wollongong, which is now home for Khaitlyn Nott, originally from Frogmore. Photo: Lena Pobjie

Not a lot happens in Frogmore most days. It’s a quiet place – more of a peaceful rural retreat with a postcode than a village – on a back road between Canberra and Bathurst in south-west New South Wales. They don’t get many tourists in the area.

Half a dozen or so houses are side by side along Frogmore Road, but mostly it’s a settlement of farms scattered in the surrounding fields. A 2016 official national census shows a population of 132, but a sign on the side of the road suggests it’s really around 50. Most families in the area are engaged in sheep and horse farming.

There are no hotels or motels. There is farm-stay accommodation 16km out of ‘town’, a craft shop and there’s also a rural fire station. Wikipedia says one of the most recent memorable events was the burning down of the local community hall during a bushfire in 1997 and a ‘pass the hat around’ concert featuring Lee Kernaghan to raise funds for a replacement. Frogmore’s public school closed almost 40 years ago due to lack of numbers. A bus takes kids 20km or so to the nearest school. 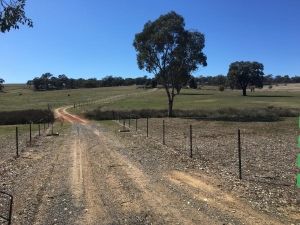 The Frogmore countryside where Khaitlyn grew up.

But something happened in September 2016 that dramatically changed the lives of three people – all members of the one family. It was late one weekday afternoon. Max and Karen Smith, Salvation Army rural chaplains at the time, were driving on Frogmore Road on their way home from a day of visiting farms. They had called into 14 properties. Not everybody was home, but it had been a long day of ‘cold calling’.

As they got close to yet another track into a farm, Max suggested he and Karen go in. Karen wasn’t keen. She had a migraine. “We have to go in here,” he told Karen. They drove along the track to a farmhouse. Max got out of the car and started talking with a woman. Karen stayed in the car, initially, but as Max and the woman talked, Karen thought she should join them. The woman’s husband joined them. The Smiths were invited inside for a cuppa.

Inside was Khaitlyn, the then 20-year-old daughter of Jan and Warren Nott. She thought the Smiths were just travellers who had lost their way. Khaitlyn’s mother asked her to put on the kettle. The two couples and Khaitlyn moved to the farmhouse verandah to continue the chat. They talked for almost three hours.

The Smiths showed regard and respect for the Notts. That’s what rural chaplains do. It had impact. The Notts trusted Karen and Max with intimate life details. As they talked, the Smiths asked Khaitlyn about her hopes and dreams. Khaitlyn was pessimistic. She had achieved Certificate IV in Community Services at Young TAFE and a Diploma of Enrolled Nursing at Cootamundra TAFE. But there were no employment opportunities offering in or around the remote community. She felt confused and lost with life. 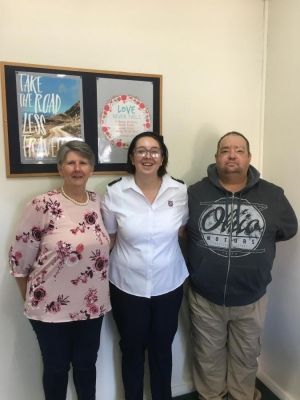 Khaitlyn and her parents, Jan and Warren Nott.

The Smiths asked Khaitlyn if they could pray for her. Khaitlyn was surprised. Her family did not have any religious associations. God was not really in the picture. She agreed. “After the prayer, I opened my eyes and tears were streaming down my cheeks,” Khaitlyn recalls now. “I can’t describe how I felt.I looked at Mum and Dad, and they were crying, too. This was an incredible moment.

She became enthusiastic about finding work.

“But I learned that whenever I came up with a plan, God said, ‘Nah’”. I was checking a Salvation Army website for jobs and there it was right at the bottom of the list, under ‘Y’ for youth work. “Wollongong Corps was advertising for a youth ministry intern. It was exactly what I wanted. But this time, I asked God first. I prayed and told God that I would go all the way to Wollongong (275km away) if he wanted me to.” From the bush to the beach; from
a population of about 50 to 300,000. “This time God said, ‘Yes’.”

LINKS IN THE CHAIN 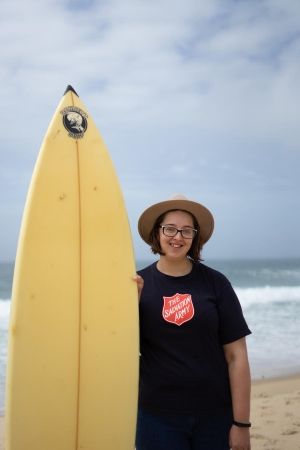 Khaitlyn started in her new role at Wollongong at the end of last year, leading youth members under the direction of Corps Officers Majors Phil and Rebecca Inglis.

Major Karen Smith, now Area Officer for NSW South-West, and Max (retired), have remained close friends with Khaitlyn and her mother and father. “A lot of people were involved [in the Nott family’s spiritual journey],” Karen says. “Max and I had nine specially selected people praying for us during our [rural chaplaincy] ministry. And there were the people at Young Corps who encouraged and nurtured the family.

“The lesson here is that we are all links in a chain. We all have our part to play and, as we play our part, God works. To be honest, I suppose that I didn’t really expect the family to turn up to church. We come across lots of people that we invite to church. Not many come. But God had his hand on this family. He still does.

“I didn’t really want to go into their home that day. I was tired. But God had plans. Faithful people had prayed and God honoured their prayer.”