You are here: Home › Features › Caring For First Responders At Christmas

Caring for first responders at Christmas 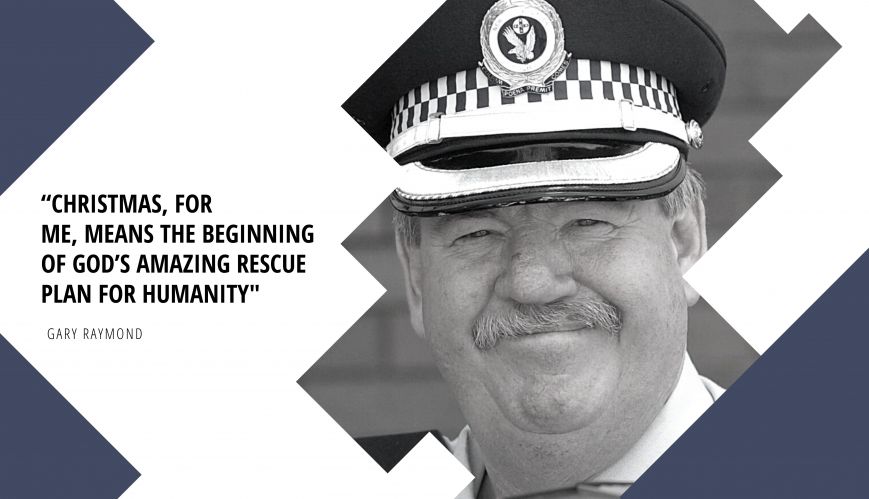 Caring for first responders at Christmas

Retired Chief Inspector of the NSW Police Force, Salvation Army soldier Gary Raymond, makes sure he is available over the Christmas period to offer emotional and spiritual support to first responders.

After a career working at the frontline of disaster, it would be understandable if Gary Raymond had a bleak view of life. However, he is full of hope this Christmas time.

As a Salvation Army soldier with a deep Christian faith, retired Chief Inspector of the NSW Police Force, Gary Raymond APM, OAM, says he is making sure he is available over Christmas time and throughout the year to offer emotional and spiritual support to first responders.

Caring for others has been a calling for Gary since he witnessed police and ambulance response at an accident at the age of four.

By the age of nine, Gary had joined St John’s Ambulance as a cadet, and at 18, he was put in charge of a trauma ambulance in Sydney.

He went on to join the NSW Police Force, where he worked in a variety of roles including police rescue, and was involved in such disasters as the Hilton Hotel bombing, the Granville train disaster and the Thredbo landslide.

In 2007, Gary was awarded the Order of Australia medal and has also been awarded the Australian Police Medal among other notable recognitions.

Gary, now in retirement, has spoken nationally and internationally about trauma and suicide prevention. He also serves as chaplain to NSW Police Post Trauma Support Groups, chaplain to the NSW Ambulance, welfare officer for the Retired and Former Police Association NSW and more.

Gary says his Christian faith and frontline experiences are completely interconnected with caring for others.

His connection with The Salvation Army began as a child and, literally, he believes, saved his life.

If it wasn’t for a knock at the door by a Salvation Army officer, who invited Gary and his four young brothers to attend Sunday school, Gary may have not lived to serve others.

His mother was highly depressed and exhausted by grinding poverty and life with a husband suffering PTSD (after his wartime experiences), who drank and gambled heavily. She often couldn’t afford to feed her children.

Gary’s mum had circled the date on the calendar when she would drug and then kill Gary, along with his four young brothers and herself. Gary explains that the night before that date, she allowed her sons to perform at the Salvos’ corps anniversary.

He says: “We performed on stage singing and doing other items and my mother said she watched us performing knowing full well she would kill us. She felt calm.

“But The Salvation Army officer got up to speak and Mum told me his next words pierced her heart. He said: ‘I feel in my heart God is telling me there is an adult here that needs Jesus to forgive your sin and heal your hurts ... God has told me that this decision will not wait until tomorrow, it has to be tonight!’ Mum stood up and walked quickly forward, bursting into uncontrollable tears.”

The transformation in his family, even the day after, Gary says, was “astonishing”.

His mother told his father what she had been planning to do and Gary says: “My father expressed his deep sorrow and promised things would change, which they drastically did. Several members of our family, including my mum, and later myself, went on to serve The Salvation Army.”

It took Gary into his adult life and many trials to come back to his childhood faith, but he says it became a natural part of his policing.

“God had used me so many times to save the lives of (potentially) suicidal people. As I negotiated, I was able to tell them God loved them and had a plan for their life.”

Although not a fire chaplain, after the ‘Black Summer’ fires of 2019-20 that burned on and around Christmas, Gary was invited to visit several rural fire service stations. He says many involved in fighting the fires have suffered serious trauma.

Gary says the Christmas story is the story of greatest hope – in Jesus.

“On Christmas Day and around the Christmas period in general, I’m so grateful that God’s not a crisis manager, he’s a strategic planner. Even before the beginning of time, the rescue plan was in place for Jesus to come and rescue us from the consequences of our sin and unrighteousness.

“Christmas for me means the beginning of God’s amazing rescue plan for humanity ... Jesus came, as we’re told, through the virgin birth, he ministered, he died and rose from the dead to show us that he was God the Son.

“Christmas means a celebration of God commencing that rescue plan, for me and for all. I just break into joy, I really do, and I break into worship because he rescued me personally and he offers hope in even the seemingly most hopeless of situations.”