You are here: Home › Features › Chaos To Christ 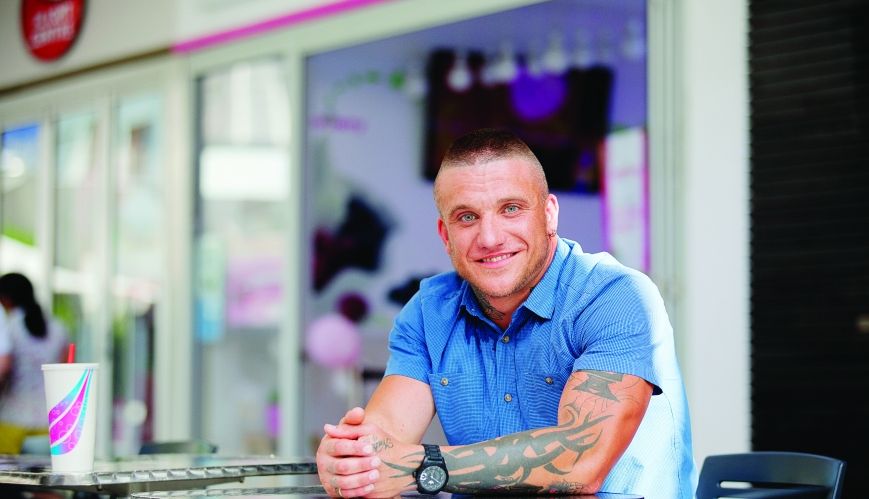 He has the words “killa” and “kaos” tattooed in thick black ink alongside other outlaw bikie club signage on his steroid-inspired, muscle-bound body.

His history is one of guns, extortion, violence, prison, anger, drug-taking and drug-running.

Mat Kratiuk concedes that his life has been “insane; soulless”. He has the photos to prove it. It’s a miracle that he’s still alive.
For 17 years, he terrorised those he considered enemies – and there were plenty. He carried a gun 24/7 to threaten them and protect himself from retribution.

Twelve months ago, Mat booked into The Salvation Army’s Dooralong (addiction) Transformation Centre on the NSW Central Coast, handed over his life to Jesus Christ and graduated this year to go into the world and make a difference for good.

He had tried rehab twice before and failed.

“The difference this time was that I was serious and I allowed God to play his part,” Mat told Pipeline after his January graduation.

“God has made huge changes; amazing changes. I can’t believe what God has done for me. Anybody who has had anything to do with me over the past 17 years would think I was a different person.

“I suppose I am a different person. To be honest, I am so far out of my comfort zone – given my past – but radical change is happening, praise God.

“As you read this article, understand that through Christ there is a new life available for anyone; for everyone.”

Mat’s life story so far is one not unfamiliar, in some respects, to those who crave acceptance; a need to belong.

He is a Westie – born in Sydney’s western suburbs. Home life was happy. Dad was an accountant and his mum a nurse.
At 12 years of age, he was diagnosed with an attention deficit disorder.

His mum and dad separated. Mat and a younger brother shared time between their parents.

Mat was expelled from school in Year 7 and left in Year 10, when he started drug-taking to impress and fit in with his friends.
At 16, he left home and headed for Queensland. By 17, he was heavily into drugs, alcohol and violence, activities that would dominate the next 16 years of his life.

He lived in unstable relationships on Queensland’s Gold Coast, popped pills, cheated drug dealers, collected for other pushers, carried out violent money-collecting activities and lived “like a king”, with flashy cars and clothes.

He carried a gun at all times and kept it under his pillow at night. He went after people and they went after him. It was the beginning of involvement with outlaw bikies.

At 24, he looked seriously at getting out of the wretched business in which he found himself – all, he concedes, of his own making. “Nobody made me live this life,” he says.

He left Queensland to spend time with his mum on the NSW South Coast. “Mum had been incredible,” he says. “She never stopped loving me, no matter what.”

Although living with his mum, he couldn’t walk away from drugs. On his 25th birthday, a dealer to whom he owed money sent hit men to his home to collect. They left him needing surgery and three titanium plates in his face and skull, and a silicon eye socket.

He returned to the Gold Coast. The lifestyle continued. The violence intensified.

“I went from being the victim on my 25th birthday to the assaulter of anyone prepared to pay the money. I was a stand-over man. I used violence to collect from druggies [addicts] who didn’t pay for their drugs.

“My 25th birthday bashing experience led to paranoia and anger. I didn’t trust anybody and nobody trusted me. I was extremely violent and feared.”

He was charged with demanding money with menaces (extortion) and jailed for six months.

At 28, he was in prison and off drugs for the first time since he was 16. But he made “valuable” drug connections in jail and walked out with even more contacts and straight back into the business.

A second time, there was a twinge of conscience and he headed for Perth and the promise of a job in the mining industry. It didn’t work out and, again, the drug business was too tempting to ignore.

He linked with outlaw bikie gang members. They nicknamed him “killa” and “kaos” because of his terrier-like attitude. He had killa tattooed on his bicep and kaos on his chest. “I was out of control,” he says.

A third time, he tried escaping the clutches of an evil industry. He tried rehab with The Salvation Army in Perth.

“But, again, I wasn’t as serious as I needed to be. I was good at making it look like I was ticking all the boxes. I was good at conning people, including myself.

“I would sit at the back in chapel and laugh quietly at those who were trying to help. All the time, I kept in touch with my bikie club-mates.

“I walked out of rehab. Within weeks, I was back on drugs. I joined a bikie club. I was that little kid again; the kid needing acceptance.

My life became a thing of extreme violence. My gun never left my side – day or night.

“I got angrier and angrier. Back in Sydney, my father died suddenly. We hadn’t spoken for a long time. I had assumed that I would have had more time later to go back home and fix up the relationship.

He dealt with the guilt by immersing himself deeper in drugs. “Even my bikie club-mates said I was going too far with the drug-taking and violence.

“That may sound incredible coming from outlaw bikers. But, to be honest, I was out of control before I joined the club. They didn’t make me violent. I did that on my own.”

Mat was kicked out of the club. During a meeting, club members tested him for drugs due to his outrageous behaviour. They declared him unreliable and sent him to hospital with an assortment of broken bones in his body.

He refused to co-operate with investigating police and, upon release from hospital, knew he had to leave town.

“I was angry and I was broken. I had nothing left. I had no friends and my ego had been demolished.

“Everything I'd had was the result of the drug business. It was stuff I had taken from other people. I hadn’t done a real day’s work to earn any of it.

“I was empty and I was alone. I had gone from infamous to a nobody. I looked up to the sky and asked God why. Can you imagine that? I asked God why. I knew why!

“Looking back now, I can see that I had to get to this point of being stripped bare before God could do anything with me.”

Mat left Perth and went home to mum. He broke down in tears as he shared his life story with the one person who never gave up on him.

He was accepted into The Salvation Army Bridge Program in Sydney. He was making progress until a partner from the past called – and he fell again.

The former partner didn’t stay long. A distraught Mat tried to kill himself. He says thoughts of his mother and brother stopped him “going all the way”.

That’s when he went to Dooralong.

“I got off the bus at Dooralong and knew right then that my life was going to change,” he says.

At first, he struggled with Christian aspects of the program, like prayer and worship meetings. They were, he says, too far outside his comfort zone, at the time.

“I knew it was God talking to me. Before that moment, I used to sit at the back in chapel. After that, I sat in the front row.”
He started reading the Bible and praying every night. He still does.

He got involved in every available activity, including external worship and teaching meetings encouraged by Dooralong staff.
At one of those meetings, he received Christ as his Saviour. He started attending Long Jetty Corps.

As well as graduating from Dooralong in January, Mat also graduated from Hunter (Newcastle) TAFE with an Outstanding Achievement Award in Certificate 4 in Business Sales. The following week, he started a new job.

At his Dooralong graduation, he thanked his family – especially his mother. He had broken her heart for 17 years, he said, but she had never given up on him. He thanked the Dooralong staff for walking the journey of transformation with him.

“But most of all, I want to thank God. Without him, none of this [transformation] would have been possible. It truly is amazing. I can even pray for my enemies now.

I was a man who once was completely dark ... I was once enslaved, but now, thanks to God, I have been set free. I love my life now.

His next venture is to study to become a pastor.

Mat was recognised for the high standard he had set in studying business management at the Newcastle campus of the college. The criteria for the award, as outlined on his certificate, included:

In acknowledging Mat's work during the course, the head teacher in business management at the Newcastle campus, Larissa Hartigan, wrote: "You were selected by your teachers as displaying these behaviours [as outlined in the criteria] which are highly regarded by employers in staff that positively contribute to an effective and dynamic workplace."