Thargominda policeman Sergeant Vaughan Collins and his wife Deslie with the toys donated by The Salvation Army for distribution this Christmas.

Christmas for the tiny outback Queensland town of Thargominda will be a brighter again this year thanks to The Salvation Army.

The Army’s Flying Padre and Outback Services chaplain, Major Mark Bulow, recently dropped in to town with boxes of toys in his four-wheel-drive ute and handed them to local policeman Sergeant Vaughan Collins and his wife Deslie.

Mark said the toys were donated to the Army by Kmart from its annual Wishing Tree initiative.

Deslie, who also works for the Queensland Police Service as an administration officer and as a teacher at the primary school, said the donation would put a smile on the many faces who had been doing it tough over eight years of drought.

“Every year, for as long as I have been in Thargomindah [since 2010], The Salvation Army has travelled the distance delivering gifts to let this little town in the middle of nowhere know that they are not forgotten,” Deslie said.

“Thargomindah is a town that consists of approximately 200 people, with another 200 within the greater Bulloo Shire area. The conditions can be harsh with frequent scorching temperatures in summer, to floods, mouse plagues and bushfires but, as the town is so small, and set so far away from greater civilisation, we usually float under the radar.

“While online shopping has made the access to goods easier over the past decade, there are always logistical challenges with regards to freight. With our nearest Kmart being 816km away, there is no such thing as popping down to the shops to grab a birthday or Christmas gift for your loved ones. 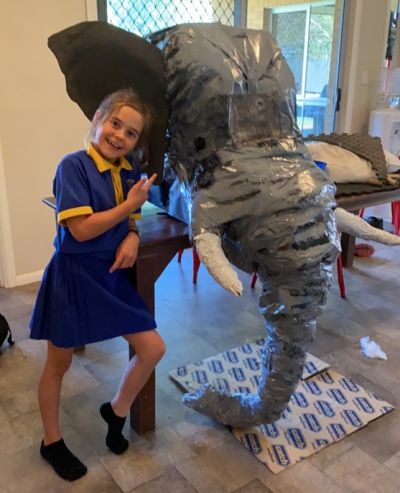 Matilda Collins with part of the elephant costume her mother Deslie has made for the school musical.

“While the children in Thargomindah remain mostly unspoiled by our distant, city-living culture and occupy their time mostly in the great outdoors, they do appreciate learning that there is a world out there bigger than the one they live in and that they belong to a vast and colourful country with many experiences and sights.

“Most years, The Salvation Army comes to Thargomindah with a brass band leading up to Christmas. With no music program out here, the instruments that the Salvos play have often never been seen or heard by the children.”

Deslie said the community would come together to see the band and hear all about Christmas from Mark and his team. “One of the greatest gifts his visit brought to the community was the message that Christmas was for all people and not just for little children waiting for an imaginary man in a red suit.

“The Salvos helped us to remember every year that Christmas was not just a present and an excuse to drink.”

Two years ago, Mark’s group was not able to do its annual Christmas trip to Thargomindah so the town had to rely on its own resources, and Christmas Carols by Glowsticks began.

“Saddened by the prospect that we would miss one year of ‘real Christmas carols’, we decided that it was time to get the community into gear and make sure that what the Salvos in the past had brought to us was not lost – which, I suppose in hindsight, was perfect timing, as now that COVID is preventing them from coming out again, we know that we can still carry on,” Deslie said.

The children lead a parade up the main street and into the park with a miniature horse to recreate the nativity and visiting Anglican priest, Fr Rick, presents a message and Bible reading.

“The carols have been well attended with so much positive feedback and were labelled the ‘Best Event of the Year’ by many.

“Our locally picked MC lets the community know that, even though Christmas can seem lonely for some out here, they are never alone; that we celebrate Christmas because it’s the day Christ came to the world and told us that the key to happiness is to love God and love each other.

“It is our hope that, in loving God, we feel loved in return and that by looking out for each other Christmas becomes just as enjoyable, for those without loved ones close by, as having the traditional family gathering; that our neighbours become our family.

“We aim to make sure that the children know that Christmas doesn’t just stop when you stop getting presents from Santa but that giving to others is showing someone that we are here and we love them.”

The Army Christmas Carol Crew has been unable to visit but Mark has still been been able to organise gifts for the children.

“It is always heartwarming to see the kids’ faces in town light up when they are given a present, especially when you know the families and are aware of their personal hardships,” Deslie said.

Making music out of nothing

The Army has not been alone in putting an end-of-year smile on the face of the town. Deslie has, too.

Thargominda Primary School does not have a music program so Deslie needs to be resourceful. She said instruments were expensive and what the school has was mostly guitars, the occasional banjo and drum kit.

With the backing of childhood music lessons, Deslie teaches the children to use their natural instrument – their voice: “an instrument they could take wherever they went”.

Against that backdrop, Deslie coordinates an end-of-year musical presented by the students. The first was written to accompany Christmas carols, then the Zeusical Musical, The Lion King and, this year, The Magic Carpet Ride (aka Aladdin).

Deslie said this year’s musical has been part of the music, drama, English and design technology curriculum.

Along with getting much of the production together, from music to rehearsals, the self-confessed non-seamstress, has been creating costumes and props – including an elephant and a magic carpet – from recycled materials such as sheets, clothing, curtains boxes, tape “and a lot of paint”.

“In the spirit of creating enthusiasm in the students and interest from the locals, the children, ranging in ages from 4-12, sing with choreography and the high school children take on the role of operating backstage/lighting/puppetry. The more that can be involved, the greater the ownership of success,” Deslie said.