You are here: Home › Features › Cornered By God Married at 15, Heather Horneman had her first child at 16. Husband David was 19. Few family and friends gave their marriage any chance. Heather, especially, had come from an abusive background. Her life could implode at any time.

But, almost 56 years later, Heather and David are still together, running a small Salvation Army corps and family store at Grenfell, in the Central West of NSW.

“The most amazing thing about the Lord, to me,” Heather says, “is that he would want me. A lot of awful things happened (as a child and later). 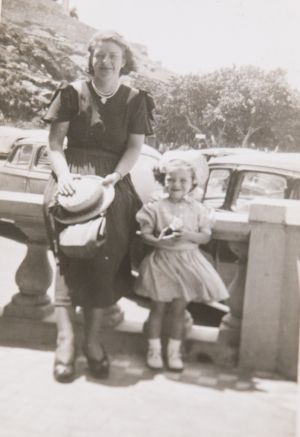 It still amazes me – it really does – that God would want somebody like me.” Life was a struggle from the start for Heather (pictured right as a child with her mother). She was born in Motherwell, Glasgow (Scotland). Her father was a heavy drinker and abused her mother.

She was around four when the family came to Australia. They lived in a small village called Harlaxton, just outside Toowoomba, in Queensland’s Darling Downs region, 125km west of Brisbane.

Her father’s heavy drinking and violent abuse continued in their new country. To escape an often horrid home life, Heather would slip across the road to a little Salvation Army outpost. It was her safe place.

There she was influenced by a man she knew only as Brother Bruce. He walked with the aid of and crutches because of the effects M of polio. “He was a beautiful, beautiful man,” Heather recalls all of these years later.

“You saw something special in him. You wanted to be like him.” Just before her ninth birthday, Heather took Jesus into her heart. She wanted her mother to go to church with her. But her mother – a very shy woman – wouldn’t go because she didn’t have a hat and she thought women were supposed to wear hats in church.

“She did have a brown Bible, I remember, and she would read that Bible when things got really tough at home.” tough times Just before she turned 12, Heather and her family moved to a southern suburb of Wollongong, on the NSW South Coast.

They lived in a flat above a wine bar. There was no Salvation Army in or near the suburb. Her church connection was severed. By now, Heather also had a brother.

“Times were tough. We were often sent out to steal food because we didn’t have any in the house. A lot of awful things happened there,” Heather says, “the sort of things that made me think that God would never want me.” At 14, another brother came into the family. “Dad made it clear there wasn’t enough room for me . I didn’t belong at home. I felt unwanted.”

She had met David by this stage of her life. He was living in the Port Kembla steelworks suburb of Cringila with his parents. They had moved from Warren, in North-West NSW. David’s parents had fostered a couple of girls, so taking in Heather was not a problem.

A year later, Heather was pregnant. She and David married and their journey together began. The journey took them to many parts of Australia. As a plant operator, David was always on the move. There were times when Heather would think back to Brother Bruce and the little Salvation Army outpost in Harlaxton.

But the family lifestyle had no space for worship. At 32, Heather and her family were living at Temora, in Central West NSW. It was Easter as the family drove into town. The only available parking spot was outside the local Salvation Army hall.

“Max Brown, who was the corps sergeant major and bandmaster, was in the street handing out copies of the War Cry. He said I should go to church. I said, ‘Yeah, right’ and shrugged it off,” Heather says. 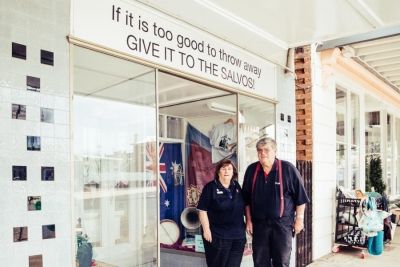 David and Heather outside their local Salvos Store.

“The following Saturday, I went to a local hotel with other family members. We were in the beer garden and in came a whole lot of Salvos. God had been working on me and I felt like I didn’t really want to talk to them. So, I popped off to the ‘ladies’. In there [women’s toilet] was a lady who just happened to be a Salvo. They were everywhere! God had me cornered. My youngest child had been asking about going to Sunday school. She didn’t want to go on her own. After a bit of persuading, I went with her. And, you know, it was like coming home. That feeling when you come in the door after you have been away for so long and you just want to be home – it was like that.”

Heather was “home” in The Salvation Army. Six weeks later she was back with Jesus.

“I went to the mercy seat and I just gave all of that garbage to God. I still couldn’t believe that he could possibly forgive all of those things that I had done. But he did. Today, I am still amazed at God’s grace. For a while, I kept a list of all of the things that I wanted to ask God. But one day – probably about 18 months after I had reconnected with God – I was overcome by the Holy Spirit. I was kneeling on the floor of my kitchen and I that writing rubbish [her list] was just that – rubbish – because when I meet God, I won’t need a list.”

Heather was enrolled as a Salvation Army soldier at Temora Corps in 1981. Twelve months later, after a lot of , David also was enrolled. “I fixed cars and Max Brown’s car seemed to have a habit of breaking down in front of my house,” David remembers.

“Max would ask me to look at his car. He was a real influence on me. One day, the corps officer brought his car to my place to get fixed. While I was trying to fix his car, he kept telling me about God. I told him that if he didn’t shut up, I wouldn’t be able to fix his car. Anyway, Max gave me and the kids some brass instruments and said he needed us in the band. I went to the meetings a few times and sat in the back seat and then found myself in the front seat, and then I became a soldier.”

David’s soldiership lapsed for some time, but Heather remained faithful, doing whatever she could in service. In 1997, they were living in Nowra, on the NSW South Coast.

Heather was asked to take on the role of Army welfare worker. She worked in the role for 12 years and then retired. Heather and David moved to their retirement home at Bribbaree, 50km out of Grenfell. They had visions of sitting on rocking chairs on the verandah and watching the world go by.

On Sundays, they were attending the Young Corps. A welfare worker was needed. Heather agreed to help out.

But one day, they drove into Grenfell, coming to a stop outside the local Salvation Army hall.

“We just sat in the car and bawled our eyes out for some reason,” Heather says. “I said to David, ‘I think we are supposed to be here’. Through tears, he said, ‘I know’. We didn’t know Grenfell at all. But we knew we had to be there.”

Seeking God’s confirmation, Heather and David agreed that if they heard the song Here I am Lord, they would offer to work at Grenfell Corps. The following Sunday, while worshipping at Young Corps, the song was played.

Heather and David went to the mercy seat and offered their lives to Grenfell. David was re-enrolled as a Salvation Army soldier. Today, Heather and David lead the Grenfell Corps, manage a family store and teach Scripture in school. 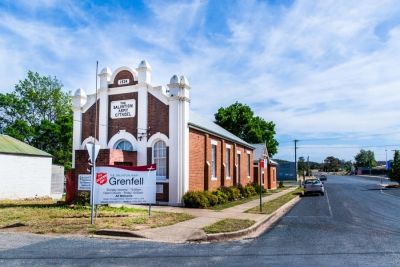 They have been there for almost six years. They have an average attendance of 10 at their Sunday meetings and another 10 people attend a Wednesday lunch. They are seeing spiritual growth in their people.

A man came from the pub and committed his life to the Lord Sunday morning. Another man became a soldier and his wife and son are “flourishing”. Heather has seen her two brothers and a sister come to the Lord. One brother is now a Baptist pastor. She had the opportunity to reunite with her father and forgive him only weeks before he died. She told him about Jesus and what he had done in her life.

“And I found out that Dad apparently played in a Salvation Army band in England when he was young. I never knew that about Dad before.” Through their lives, Heather and David have also seen children, grandchildren, great-grandchildren and many of their foster children come to the Lord. “We are very blessed,” Heather says. “God’s grace is indeed amazing.” At the end of every year, Heather and David think about “really” retiring.

Bill Simpson is a contributing writer for Others