You are here: Home › Features › Dedicated Volunteers Team Up To Cater For Citys Needy

Dedicated volunteers team up to cater for city's needy 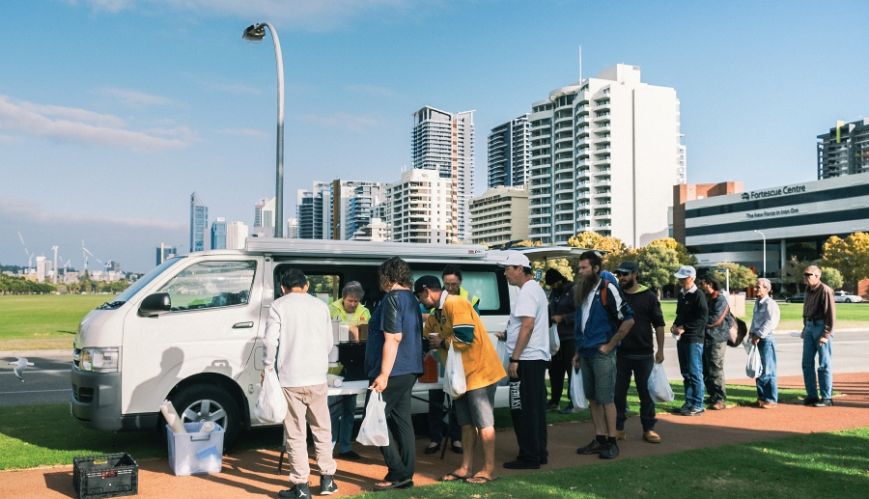 Dedicated volunteers team up to cater for city's needy

A queue forms at the breakfast van. Photos: Joel Gibson

Working in partnership with the community is a key part of The Salvation Army’s work among the homeless in the city of Perth.

Every week hundreds of people in need are offered support and care through a breakfast program, a safe place to seek help and through weekend outreach teams.

It is a team effort, driven by dedicated local volunteers drawn from local schools, corporate business, individuals from the community and members of Perth Fortress and other corps in the city.

“While The Salvation Army is known to do great works, we can’t do it on our own,” says Perth Fortress Corps Officer, Major Paul Hateley. “We need the resources from our community. Not just donated goods but time and expertise and talents.” Major Hateley also said working closely with the community resonated with The Salvation Army’s vision to “fight alongside others”.

Two key ministries reach out to those doing it tough – a weekday breakfast and a weekend outreach street team. Both are driven by dedicated volunteers. “The community in Perth are very generous with their time,” says Bret Mulder, volunteer coordinator. “It does go back to the school partnerships we have developed. High school students are encouraged to offer their time and that really establishes the value of volunteering in them, which follows through into their adult life. I have spent about 30 years working for The Salvation Army in various roles. This role is probably one of the best I’ve done. It’s part of a much bigger picture, helping people on the street and that is very satisfying.”

The breakfast ministry was originally established by the Rivervale Corps in Perth’s city centre. One of their most famous volunteers was the late Salvationist and local icon Shirley Mort.

“At the time when the program started, Shirley was recently widowed and wanted something to fill her time,” says Major Hateley. “She would get up at 5am and make all the sandwiches for the soup run.”

About 10 years ago, Perth Fortress took over the work when Rivervale Corps closed. Currently they serve breakfast in two East Perth locations – Ozone Reserve on the river, as well as in nearby Wellington Square in the city centre – providing a breakfast meal for over 400 people each week.

Throughout the day, those experiencing hardship can access additional services at the corps through the Doorways Program. “We don’t offer a complete day centre, but those coming in to request help or for a safe place can enjoy a baristamade coffee,” said Major Hateley.

“We also have a shower block for those who want to use them. Many people facing homelessness are very fearful of their safety and don’t sleep well. So they come to us during the day for a place of safety and often have a rest in our hall.

A literal ‘snooze on the pews’!” 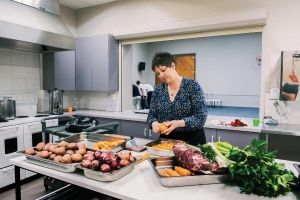 For the past five years, the corps has been sending an outreach team out each Friday, Saturday and Sunday night, taking hot meals and other provisions to those sleeping rough around the city, serving more than 100 people across each weekend.

“A lack of services was identified from Friday night to Monday morning and so the outreach team was started,” said Ben Hollis, Assistant Corps Officer at Perth Fortress.

The Salvos partner with Oz Harvest, a charity that rescues surplus food from supermarkets and restaurants and redirects it to those in need. Every Tuesday, a local chef, Kate Strong (pictured right), volunteers her time to cook meals for the weekend teams to distribute.

“Last year there were some fairly large global issues that prompted me to look for a small way I could contribute in my own way to make thing better,” she said. “I hadn’t had much connection with The Salvation Army apart from volunteering for their doorknock appeal when I was younger. I find it hard that in such a wealthy country there are people who are not able to access the food and nutrition they need.

“The fact that we have quite a lot of food wastage as a society and at the same time have people who are struggling financially and nutritionally is quite frustrating for me, so I find it encouraging to be saving and utilising food that otherwise would have gone in the rubbish and people are benefiting from that. I have always deeply admired people who live by their beliefs and I feel that The Salvation Army is a good example of that.”