You are here: Home › Features › Drawing On Army Life Lindsay Cox's enthusiasm about Salvation Army history is infectious. Along with cartooning, it is a great passion in his life.

There’s something about Lindsay Cox’s cartoons that make you laugh out loud. Maybe it’s his uncanny ability to depict The Salvation Army’s clichéd culture with the stroke of a felt-tipped pen – his willingness to lovingly take the mickey out of a denomination he has loved and served most of his life. Whatever the case, it’s not every day you see a cartoonist take on Hamodava Coffee, General William Booth, or Gowans and Larsson.

Since the release of his book, Fire A Folly, in 2015, and its sequel Fire Another Folly, Salvationists around the world have got a chuckle out of Lindsay’s illustrations. Paired with Gordon Main’s witty poetry, the books have contributed to a resurgence of traditional Salvation Army culture in the hearts and minds of Salvationists. 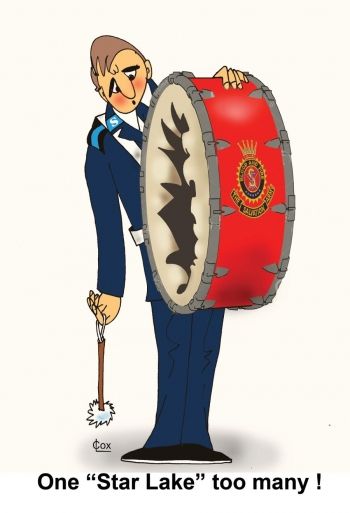 Lindsay is the Australia Southern Territory archivist, based at the Heritage Centre in Melbourne. His enthusiasm for Salvation Army history is infectious, and he takes great care preserving the Army’s history through an increasing collection of memorabilia and other items of historical signicance. But his “other hobby” is cartooning, and he says it’s the older generation who has been so drawn to his illustrations. “The Salvation Army has changed so much,” he says. “The people that make all the comments are more mature people, and these are the people who are looking at my cartoons in a nostalgic way. The Army that’s gone forever ... they sort of see it.”

Unlike many contemporary cartoons, Lindsay’s illustrations aren’t political – there’s no closet intent to bring the Army of old back, he says. Instead, the illustrations exist to give people joy by reminiscing on the past, the days when Lindsay says he first started attending the Army and began sketching its activities and idiosyncrasies. “I came to the Salvation Army as a 15-year-old, through the Glenroy youth group, for a girl!” he concedes. “She left and I stayed. The earliest cartoon I physically have was sent back to me by my first corps ocer after I drew a cartoon of him, 60 years ago!”

As a teenager, Lindsay dreamed of becoming a full-time cartoonist. Despite his career going down the path of telecommunications, he still kept alive his passion for cartooning. He found a home for it by cartooning his workmates, and in The Salvation Army when he had his work printed in the Young Soldier and Musician magazines.

A keen observer with a sharp wit, over the years Lindsay would pin funny illustrations of corps activities on the notice board so everyone could have a chuckle. His platform soon became Facebook and email, and his pictures gained him fans from as far afield as Canada, Holland, the United States and the United Kingdom. “It’s a real pain (the popularity of his cartoons) actually,” he laughs. “I missed posting a picture one week and the amount of abusive emails I got – I’m too scared to miss out again!”

Lindsay is the last person to blow his own horn (illustrated or otherwise), so publishing his cartoons was never on the radar. That was until Captain June Knop, then acting head of the Southern Territory’s editorial department, suggested he collaborate with Gordon to create Fire a Folly. “Gordon happened to be in her office when she received an email from me and on the spot he wrote a poem for it, which she sent back,” he explains. “She said, ‘You two should get together and do a book!’ I felt my cartoons weren’t good enough and I said no. But it took her about six weeks, and finally we came up with Fire a Folly!” 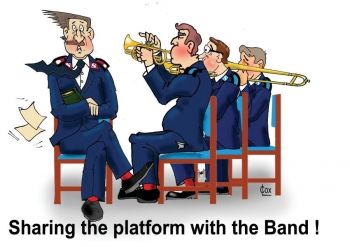 Two books later, and with another one just released titled Band for Life, it’s fair to say Lindsay’s cartoons were always more than simple drawings. They are a historical record of the Army we grew up in, with some hilarious anecdotes thrown in.