Summer movie viewing doesn't have to be mindless escapism or forgettable entertainment.

The school holidays are almost upon us, and so too the avalanche of family films that mark the end of the year. Trips to the cinemas are a welcome part of the Australian summer, but they’re not usually the best chance to relate to the youngest members of our society. But with a little thought, you can prepare yourself for a fantastic chat when the lights come up.

FANTASTIC BEASTS: THE CRIMES OF GRINDELWALD

The latest instalment in the Fantastic Beasts saga incorporates numerous nods to the previous Harry Potter and Newt Scamander films, as well as “deep lore” references from all seven of the original novels.

For those who’ll need a primer, the plot is now stretched across several characters. Newt Scamander (Eddie Redmayne) has been recruited by a much younger Dumbledore (Jude Law) to track down the powerful novice Credence Barebone (Ezra Miller) before he can be recruited by the arch-evil Gellert Grindelwald (Johnny Depp).

Each has their own developing storyline, which eventually intersect in a climactic encounter on the streets of Paris.

Grindelwald is presented as something of a Hitler in his early days – passionate but reasonable, recruiting supporters from disaffected wizards who feel as though life has denied them the happiness they deserve.

Interestingly, scriptwriter JK Rowling has him constantly justifying his actions in the name of freedom, which goes to show how easily that concept can be used to cloak ultimately selfish and harmful actions.

The moral struggle, though, centres on Newt, who is determined to do what is right but tells Dumbledore, “I don’t do sides”.

He fails to realise that “right” requires a standard, and our choices will put us on one side of it or the other.

So, the best conversation starter is to ask your younger companions, “If everyone says they’re in the right, where do you get your idea of ‘right’ from?”

This is the third time that Dr. Seuss’ best known Christmas tale has made it to the screen, but for first-timers, here’s a crash course.

The Grinch is a solitary grump who lives with his dog, Max, atop a mountain overlooking the happy town of Whoville – a place he only ventures into when he wants groceries and is in the mood for mischief.

Christmas represents an annual bad mood because the festivities get on the Grinch’s nerves, and when he hears the townsfolk plan to make their celebrations “three times bigger this year”, he decides to steal their happiness.

The twist in the tale is that even though the Grinch makes off with all the physical reminders of Christmas, a little girl called Cindy-Lou helps him see Whoville is still full of happiness – because there’s a “deeper meaning” to Christmas.

If you’re thinking stars over mangers, though, you’ll be sadly disappointed. The happiness at the heart of the Grinch’s holiday is that supplied by family and friends.

It’s a long way from the real joy the angel announced at the very first Christmas: “I bring you good news that will cause great joy for all the people.

Today in the town of David a Saviour has been born to you; he is the Messiah, the Lord. This will be a sign to you: You will find a baby wrapped in cloths and lying in a manger” (Luke 2:10-12). And not a grinch in sight.

But on the plus side, it does supply adults an open invitation to retell that tale, and let kids know the real sources of happiness at Christmas.

THE NUTCRACKER: THE FOUR REALMS

Clara is a teenage girl living in Dickensian England who has lost her mother.

However, a Christmas visit to her rich uncle (Morgan Freeman) puts her on the pathway to a magical world where four fairytale realms are embroiled in a terrible conflict.

What follows is an “Alice down the rabbit hole” adventure that reveals Clara is actually the heir to this fantastic kingdom – if, that is, she can restore peace, with the help of her daring friends, the Nutcracker Soldier and the Mouse King.

The Nutcracker is visually gorgeous, and full of the sorts of elements that captivate little girls – but not too little.

The plot is sufficiently complex that I wouldn’t recommend taking anyone in early primary school. 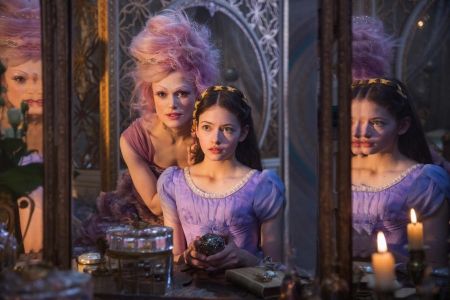 There are plenty of buried morals to unearth, including an attack on militarism and the necessity of living in the real world.

However, the best lesson centres on the duty of a ruler:

Sugar Plum: “A true queen does what’s best for herself!”

Clara: “No, a true queen does what’s best for her people. And I am every inch my mother’s daughter.”

In that line lies an open invitation for parents to talk to kids about the sort of king the King of Christmas is.

Jesus deserves our obedience because he put the needs of his people first, dying so that we might live forever.

If Clara can see that’s the best sort of ruler to give your loyalty to, then I’m sure it’s not above any young person.

Now, you might think the sort of conversations I’ve suggested are well beyond you and your pint-sized acquaintances.

Let me assure you as a film reviewer and a dad, no one finds it easy. But if you’re going to try and wrest some meaning from that time away together, here are three hints that should help:

1. Talk soon. Kids’ memories can be as short as their attention spans, so start chatting as soon as you can. I like the car trip home. It’s a great place to ask something simple like, “Who was your favourite character?”

2. Don’t expect too much. It might not be a long talk, but you can start them on the road to bigger reflections just by asking them about their reactions. Like, “What did you like the most?”

3. Follow their lead. You might have a point you want to make, but no lesson sticks longer than the one you come to together. You’ll be surprised with insights they have to offer if you can get them to consider, “What was that film about?”