You are here: Home › Features › Finding Freedom In Prison Born in Sydney in 1974, with an older brother and sister, Kevin Lawler and his family moved to Logan City, between Brisbane and the Gold Coast, when he was seven. He remembers being raised in a rough part of town, although his upbringing, he recalls, was good. He was a happy child.

Mum, Joy, was a good Salvationist, attending the local corps on a regular basis and witnessing to her family and friends. Dad, Kevin, had been raised in The Salvation Army, but left when he was a young man.

Kevin (Junior) kept his distance from The Salvation Army – and God. He had no interest in religion. He experimented with drugs in his late teens. He had numerous jobs; even owned his own company. In his early 20s, he became engaged to a young woman. To his surprise, the young woman told him that she worshipped at The Salvation Army on Sundays. She convinced him to go with her.

Kevin was in for an even bigger surprise the first Sunday he turned up to then Logan City Salvation Army Corps. “I walked in and there was Mum,” he says. “I knew she went to The Salvation Army on Sundays, but I didn’t know where. But here was my mother. I think Mum was just as surprised as me.”

Early in their relationship, the young woman ended her life. It was the third major loss of somebody close in his life. His father had died two years earlier and a friend was shot and killed one year earlier. “I didn’t deal with the death of three people close to me,” Kevin says. “And there was heaps of trauma. The church family was fantastic to me when my partner died. They gave me great support.”

Kevin gave his life to the Lord during an Unlimited Conference at Logan City Corps in his late 20s. He met another woman at the corps and they married. “My marriage was going well. But I think I was immature as a Christian. My faith was at an adolescent stage,” he says. 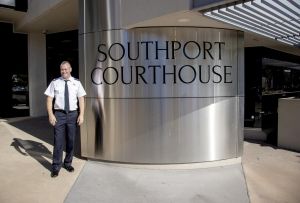 “I went into a business partnership. It went well for about five years. We were making a lot of money. But I lost the company in a hostile takeover after my business partner died in a car accident. My world fell apart. I had a breakdown. My marriage disintegrated. I left the church. I had always been a good provider, then, all of a sudden, it was all gone. I couldn’t provide. I couldn’t cope. I struggled. I went back to drugs and I got involved in crime. That’s when my wife left.”

Kevin was arrested for supplying illegal firearms. He was taken to the Southport (Gold Coast) police cells. “And, here,” he says, “is where God steps in. I have absolutely no doubt about that.”

At the cells, he asked to be put in touch with someone from The Salvation Army. “When I was taken to the cells, I wanted to contact Mum to let her know that I was still alive and in jail,” he says. “But I couldn’t remember Mum’s telephone number. I was now 40 years old. I asked for a Salvo because I thought the Salvos would know my mother.

“Major Kay Nelson came and, yes, sure enough, she knew Mum. I was held on remand for nine months. The court case took three years to complete. During that time, I went to The Salvation Army Gold Coast Temple and did the Positive Lifestyle Program (PLP) with Major Kay Nelson and Robin Martin from Eleanora Corps. Those two women showed me the love of Christ.”

At the conclusion of his court hearing, Kevin was sentenced to three years’ imprisonment. “As I sat in the court and the sentence was read, I was in complete peace,” he says. “I was aware of the words (of Jesus) that the truth will set you free. I was free, even though I had been sentenced to prison.”

During his prison term, Kevin says his faith grew stronger. He developed a grateful heart. “I could push my face up against the bars of the prison cell and see the Glasshouse Mountains through the razor wire. I was so grateful for that view. I started to count my blessings that I was safe and at peace. That’s where – in jail – I felt the joy and peace that only knowing Christ can bring.”

It’s also where he realised what a special person his mother was. “I told her not to come to see me in jail. But she did – many times. I broke Mum’s heart many times, but she still came, no matter what. Mum has been my rock. She has always been there for me. I don’t deserve her love, but she just keeps giving it.” 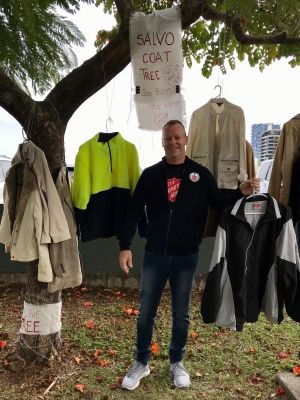 Towards the end of his sentence, Kevin was sent to a prison camp. He was allowed to attend a local church. Even though he went as a prisoner, he says the congregation welcomed him and supported him. He recommitted his life to Christ and was baptised in the ocean.

Now back on the Gold Coast, he is attending Gold Coast Temple Corps, studying and working as a volunteer at the same court where he was sentenced to prison. He has completed a Positive Lifestyle Program facilitator course and is working with mainly younger men passing through the court system.

With Salvation Army Gold Coast community engagement officer Major Chris Cohen, Kevin started a novel project of hanging warm coats on trees for homeless people to take. The coats are donated by Salvos Stores. “It’s part of the process of us advocating for the homeless,” he says.

“Throughout my life – even before and during prison – I kept receiving the words of Jeremiah 29:11: ‘For I know the plans I have for you, declares the Lord, plans to prosper you and not harm you, plans to give you hope and a future.’

“All along, God has had a plan for me. Now, I am living that plan, I have that hope, and I have a future. Thanks to God.”