You are here: Home › Features › From The Streets To The Stage

From the streets to the stage From the streets to the stage

Dwaine is now using his musical gift to educate young people about the issue of homelessness. Photo: Lena Pobjie.

While the heartbreaking story of two young teenagers begins on the streets of Sydney, it doesn’t end there. Tragedy struck both Dwaine and Owen in different ways but saw them take the same path towards homelessness.

Grief took hold of Dwaine’s life after the unexpected deaths of some family members. There was little community support available for Dwaine and his family. He quickly fell out of school and before he knew it, was kicked out of home. For a while, Dwaine “couch surfed” – a form of homelessness where individuals, who do not have permanent housing accommodation, sleep on a friend’s couch for a period of time. But it wasn’t long before he was back on the streets.

It wasn’t until a pastor from a Sydney food shelter contacted The Salvation Army that Dwaine’s life began to turn around. He was referred to the Oasis Youth Support Network in Surry Hills, Sydney, and was able to access all the services he needed to get back on his feet. “I feel really blessed because if I had not received that, I think my life would have taken some really different turns,” he says.

Similarly, Owen life’s life took a wrong turn due to continual family problems and drug use. Owen, too, was kicked out of home and lived on the streets of Sydney for several months. It wasn’t until he was arrested that things began to change. The Salvation Army was called and Owen was taken in. He lived intermittently at Oasis for a period of time before attending a rehabilitation centre in Goulburn. “If it wasn’t for the Salvos, I’d probably still be on the streets, in jail or dead,” says Owen.

Both Dwaine and Owen began to find healing and a hope for the future through music. They took their passion for rap, rock and hip-hop music and started writing songs based on their personal experiences of living on the streets. “What we once tried to clutch to, to feel better was the wrong things, like drugs and alcohol, but we found this [music] a much better way to express ourselves and a release,” says Dwaine.

From here, Dwaine and Owen’s lives literally moved from the streets to the stage. Once given the opportunity to record music with Australian charity, Musicians Making A Difference, their lives began to move in a different direction. In 2013, Owen, known as Ozone on stage, released a collection of songs called Clearly Invisible, bringing awareness about youth homelessness through his lyrics. After one of Dwaine’s recorded songs appeared on Channel V, he was given the opportunity to study music production and composition at the Australian Institute of Music.

While Dwaine and Owen have found a niche in music, ultimately, they said, it was the purpose they discovered through writing their own stories that changed them. “It [music] became this magical transformative thing and so amongst the vicious cycle of homelessness, something that was created was this amazing cycle of hope,” says Dwaine.

Now Dwaine and Owen are using their musical talents to help younger generations. From 25 July-5 August, they are visiting 12 high schools throughout Sydney and the Central Coast to educate students about homelessness, as part of Salvos School initiative, Streets to Stage. Owen and Dwaine performed their songs and shared their testimonies to up to 6000 teenagers. “If you can write a song and get 6000 people to listen but doesn’t actually help anybody, it’s not as good as if you write a song and 10 people listen to it and it changes their life,” says Owen.

Picking up on this theme, Dwaine, a commited Christian, says: “I feel like I have a duty of care to others who are in that situation [referring to homelessness]. If I don’t hand the baton on, then I’m kind of being selfish. I want to give back and say, ‘You’ve got a reason to live. There is a purpose for your life. I want to sow some seeds of compassion and hope into schools.” 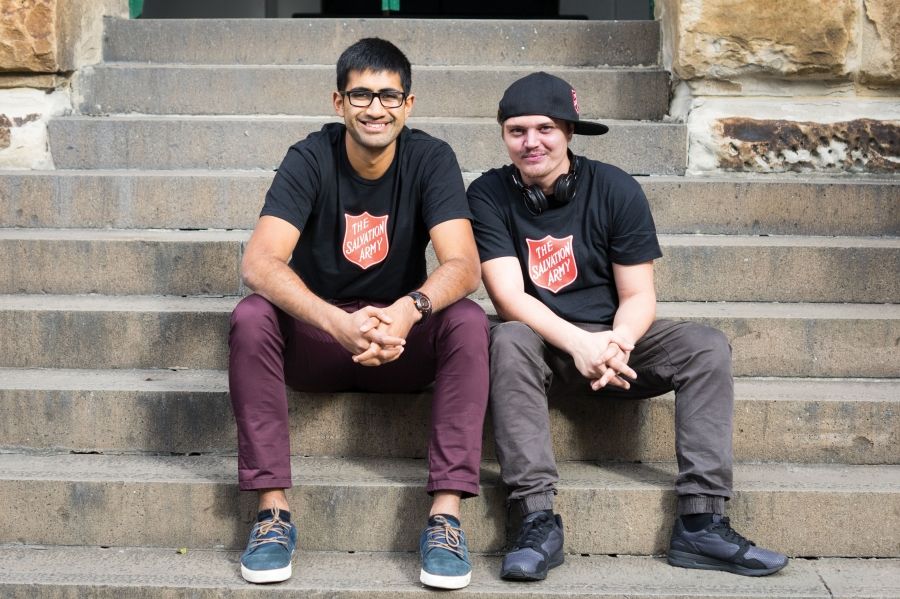 The Streets to Stage tour is part of The Salvation Army’s annual Couch Project fundraising and awareness campaign. Young people are invited to host their own Couch Project sleepovers at their local school or church on 16 September to help raise $120,000 for the Army’s youth services, including the Oasis Youth Support Network. Owen and Dwaine helped promote the Couch Project campaign while on the Street to Stage tour, educating young people about the dangers of homelessness and how they can avoid falling into the homelessness trap, through sharing their stories.

“It’s about educating high school students about homelessness, how they can help a friend, how they can access help, or find help if they’re ever in a situation where they may be experiencing homelessness,” explains Jason Poutawa, Salvos Youth Foundation Coordinator. “People are going to remember this – the day that Owen and Dwaine came to their school.” Dwaine and Owen’s lives look very different today. Owen has his own place in north Epping, while Dwaine lives in Midland, Western Australia, with this wife. “I’m a living testimony that there is hope and that you don’t need to be stuck in homelessness or in a life of hardship,” says Dwaine.

For further information about the Couch Project, to host your own fundraiser or to donate to the campaign, go to thecouchproject.com.au