You are here: Home › Features › Grey Army On The Front Line

Grey army on the front line 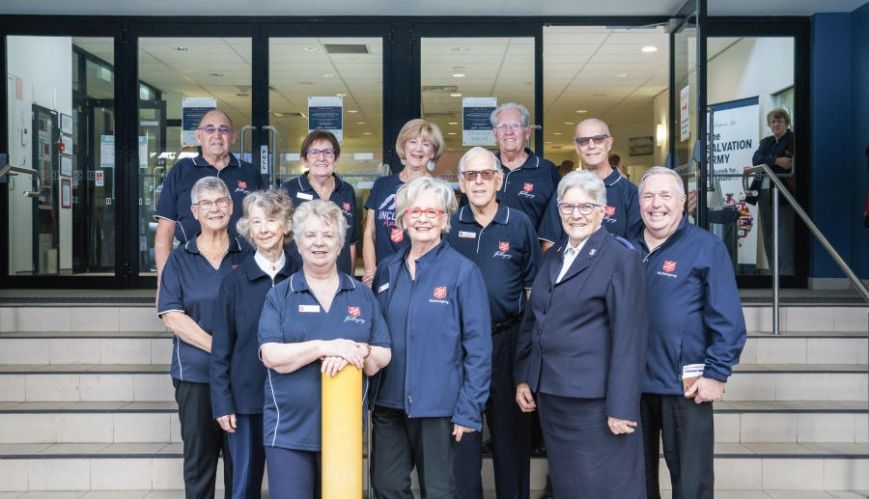 Grey army on the front line

Some of the Front Desk ministry team on the front steps of Wollongong Corps. The team engages with needy members of the community throughout the week. Photos: Lena Pobjie

At Wollongong Corps, the entire front line to a community in need has a distinctly grey-top appearance, interspersed with splashes of wisdom-enhanced white.

Every member of the front line – or Front Desk, as it is officially titled – is a senior.

There are 22 of them in the Front Desk ministry. Some are aged in their 80s, some in their 60s. Most are in their 70s. All are volunteers from within the corps community.

This team of retirees provides the ‘people power’ to engage six hours a day, five days a week with needy community members who call at the corps for assistance.

The Front Desk ministry is part of the Wollongong Corps contribution to The Salvation Army Doorways (welfare) program.

Community members seeking assistance through Doorways phone a Salvation Army call centre and, after assessment, are referred to a corps building like Wollongong to collect whatever has been allocated to them by an online assessor.

People also walk into the corps building without appointment or assessment seeking assistance. They enter from a busy main street into an expansive modern and friendly foyer where they are received by a Front Desk ministry volunteer at a reception area.

Mostly, community members receive a pre-approved EFTPOS card to purchase food. They could also be allocated a card for clothing, fuel, transport, medical bills and other needs.

At Wollongong – which services a region known as the Illawarra (Wollongong, Shellharbour, Kiama) – up to 100 people are assisted every week at a cost of about $250,000 a year.

Wollongong Corps adds value to the Doorways allocation by offering community members bags of food and a coffee (or cold drink) and toasted sandwich from its cafe. The food and coffee are mostly provided and paid for by corps people.

It’s not unusual for a community member to call into the Wollongong centre just to have a coffee and toasted sandwich, and a quiet chat with somebody who can help. Regional Doorways manager Rodney Stanton says the effort of the Wollongong seniors is “way up there” in terms of corps-based Doorways activity in the Australia Territory.

“Wollongong is certainly the supreme leader in terms of Southern NSW and the ACT,” he says. “They see more people for emergency assistance than any other corps in my region. It’s remarkable that all of this is done by seniors who are volunteers.

They are definitely carrying a torch for The Salvation Army.”

Wollongong’s Front Desk ministry is coordinated by Janette and Ron Smart, who transferred to Wollongong from Sydney’s Hurstville Corps five years ago. 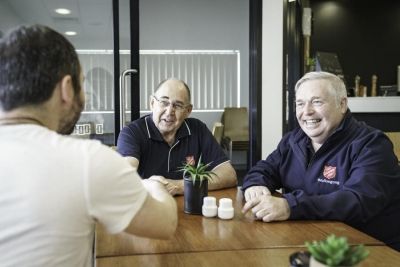 Ron, in his 80s, and Janette, a few years younger, are well-known in Salvation Army circles, especially in the music field. Ron was founder of the Sydney Staff Songsters and has been bandmaster at several corps, including Hurstville, Sydney Congress Hall and Campsie.

He has been the musical director at Hollywood Tabernacle (now Pasadena) in the United States. Janette was a foundation member of the Sydney Staff Songsters and a highly-motivated organiser and events arranger.

When they arrived at Wollongong, a small Doorways program was in place three hours a day, three days a week, with one paid employee and two volunteers. At first, Janette and Ron set up a small team to staff the reception area five days a week to assist the corps officers and the Doorways workers.

It’s a busy reception area. Two days a week, hundreds of members of the University of the Third Age (an international movement whose aims are the education and stimulation of mainly retired members of the community) meet in the corps auditorium. Private groups use various rooms for conferences and training.

Distance students from regional universities use rooms for examinations. The cafe is busy and operates five days a week. The teams of volunteers for Doorways and reception were ultimately combined to provide coverage six hours a day, five days a week.

“When we started looking for people to staff the Front Desk ministry, we found just so many who had given tremendous service in their corps over a very long period and were not ready to sit on the sidelines, just yet,” Ron says. “They still wanted to be useful, although happy to move from the more demanding roles of leadership. The Front Desk ministry suits them fine.

“Most of our people spend one day a month on the Front Desk. Some do two days a month. A couple do one day a week. So it’s more enjoyable than onerous. I think it’s remarkable that people in the corps in their senior years are making such a huge contribution to The Salvation Army’s program of assisting community people in need.”

Corps Officer Major Rebecca Inglis is overwhelmed by the support provided by the seniors of her corps. “Our Front Desk ministry volunteers are the friendly face to welcome everyone who enters our building,” she says.

“In essence, they are saying ‘you are welcome here’, which we see as an essential first step in building community inside our building, whether by pointing somebody in the right direction, providing food or a cup of hot coffee, or offering a listening ear.

“Our seniors are our most experienced and some of our most skilled corps members. They have really embraced the vision to transform our community one life at a time with the love of Jesus.”

Rebecca’s father, retired officer Major Robert Sneller, drives a 130km round trip from Narellan, in outer south-west Sydney, every Friday to assist on the Front Desk because he sees the value in the service.

“Working for the community through the Front Desk at Wollongong has allowed me to meet many different people and to assist them to overcome situations that have impacted their lives,” he says.

“It gives me joy to help and a knowledge that God is using me to do the work of spreading his message of love and forgiveness.” So, while The Salvation Army in Australia is trying ‘new things’ across the country, on the front line in Wollongong, everything old is new again.