Holiday Hobbies: Bruce gets stung by the bee bug Holiday Hobbies: Bruce gets stung by the bee bug

The bee’s knees: Gold Coast City Temple bandsman Bruce Carey with the two hives he has in his Burleigh Waters backyard.

Gold Coast Temple bandsman Bruce Carey has had a bee in his bonnet about apis mellifera for quite a while – in a good way. 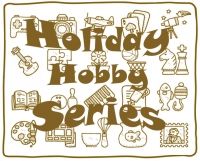 Apis mellifera is the scientific name for bees and an apiarist is someone who keeps them.

Bruce said he has always had a dream in the back of his mind of owning bees and getting the honey from the hives, but it wasn’t until he moved up from country NSW in 1993 to Queensland’s Gold Coast and retired that he was able to turn that thought into reality – although it took more than 10 years to get his first bees.

Another Gold Coast bandsman was “into bees” so he gave Bruce his original hive and helped him set up ... and the rest, as they say, is history. That was in 2007.

Today, Bruce has two healthy hives in his Burleigh Waters backyard and robs about 60kg from them every six weeks or so. He estimates that there are about 60,000 bees in each hive. 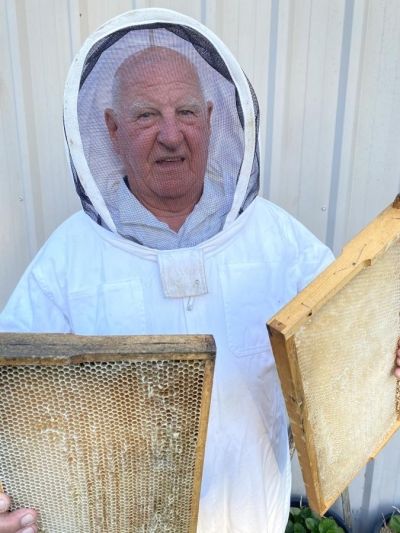 Staying safe ... Bruce Carey in his protective gear with some of the frames from inside his hives.

Bruce keeps some honey for himself, and some friends and family, but sells most of it.

When he started out, he sold tubs of honey for $5, and 13 years on he still sells them for $5. “I keep the neighbours happy by giving them honey,” Bruce said. His wife Helen said: “You wouldn’t believe how much honey he gives away.”

While many wives complain that their husband’s hobbies take up most of their spare time, Helen says that, with beekeeping, “it’s a hobby that you don’t have to be married to”.

“Beekeeping keeps Bruce interested. He really just checks them every day,” she says.

Most of the honey is sold through the corps, which is used to keep the band running – repairing instruments, buying music and any other expenses the group incurs. He has raised more than $5000 that has all gone to the band. He estimates he sells about 100kg of honey each year.

On the Sunday afternoon when the interview for this story took place, he sold 14 tubs at the corps that day.

He labels the product St Bees Honey after the hymn tune, which has remained in The Salvation Army band tunebook from being number 152 in the 1953 publication to 293 in the 1987 release and now 260.

Bruce said the secret to a steady stream of honey was keeping the bees strong and healthy – “that will keep the diseases out and I’ve always kept to that”.

“We don’t know what sort of honey it is. It’s just Burleigh Waters honey – whatever is growing around here (flowers). We just know that everyone who buys it thinks it’s the best honey in the world,” Helen said.

These days it costs between $200 and $300 for a box of bees and then there is the cost of the protective equipment to wear when working with them, the equipment to extract the honey, maintenance costs of the equipment and finding the containers in which to store the honey – “which never goes ‘off’ “

Bruce said people could spend as much time working with the bees as they wanted but they were relatively easy to maintain. “You can go on a couple of weeks’ holiday and not have to worry about them because they feed themselves and look after themselves. I do put the hose on them on a hot day and feed them a mixture of sugar and water every second day.”

Bruce described as the best part of beekeeping as “watching what they do”: “I just love watching them. I see different bees come in [to the hive] with yellow on it and the next one will come and it’ll have nothing on and the next will have white pollen on it; different coloured pollens. Fascinating.

“I’m always looking into the trees when Helen and I are out walking to see if there are any bees in them.”

The Careys don’t eat honey all that much apart from their daily alfresco breakfast ritual: they sprinkle cinnamon over their cup of tea and put some honey in it. People continually tell them it’s good for their health so “why not?”

Of course, there are the mandatory stings: “I get stung most of the time,” Bruce said. Even wearing the full-cover bodysuit, the bees still get inside and sting.

Bruce has two Bibles in his house – the one he uses for his devotions and in church and “the bee bible” – Peter Warhurst and Roger Goebel’s The Bee Book.