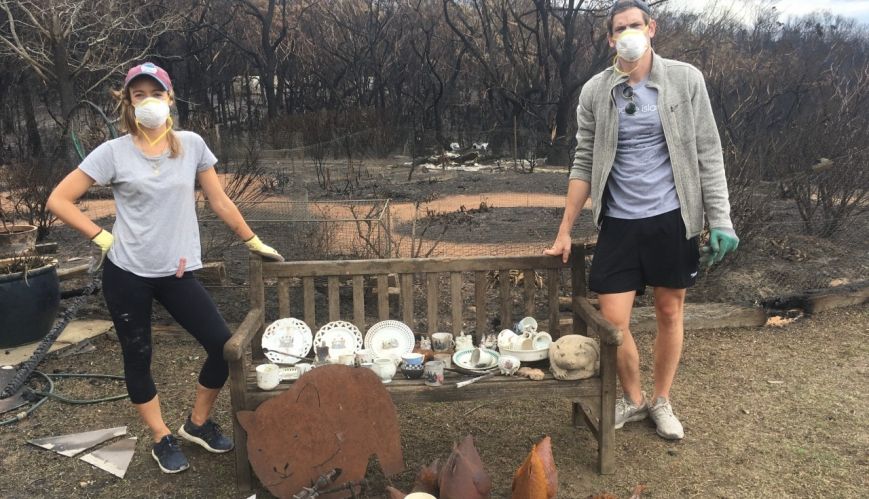 Two members of Laura’s family with the few items remaining from the bushfire that destroyed her home in Kangaroo Valley, southern NSW.

In the picturesque NSW hamlet of Kangaroo Valley, lush pasture, grazing dairy cattle and a stunning river create an idyllic backdrop for both locals and tourists who flock to the area over the summer.

However, on Christmas and Boxing Day 2019, amid prolonged drought, there was smoke in the air, the bush was tinder dry and concern was growing about the huge Currowan fire front that was inching north.

Laura and her husband Scott – together with their adult children and families who had travelled from homes in the United States and the United Kingdom with partners and children – spent a hot, but enjoyable, family Christmas together in their beloved Kangaroo Valley house, ‘Burrawang’.

As the family was packing up on Boxing Day to head off for a coastal break, Scott suggested they pack some photographs and other precious items as a precaution.

“We almost felt sheepish driving away with all this stuff, thinking in a few weeks we would just be carting it back again,” Laura laughs, saying the family never dreamed fire would directly affect their sandstone home, which was surrounded by sprinklers and had sprinklers on the roof.

By early January, the Currowan fire – which had started near Batemans Bay in late November and eventually burnt about 500,000 hectares and destroyed more than 300 homes – had reached the Shoalhaven region and the township of Kangaroo Valley came under threat.

Laura explains: “Scott wanted to head back but our friend, who rents a small cottage from us on the property, said no. Visibility was almost zero and access to Kangaroo Valley was through bush both ways. He said he’d turn on the roof sprinkler system if needed.”

On 4 January 2020, a southerly change diverted the fire away from the main town centre, but, sadly, Burrawang was in the fire’s path. The intense heat completely melted the water pump, so the sprinklers ran dry and Scott and Laura’s beloved house was reduced to ashes.

Laura says: “Our friend left in time, thank goodness; he wouldn’t have made it [if he had stayed]. Fires create their own storm and it created a fire tornado. If Scott had gone down, maybe with our son, there is a very good chance they would not be here today.” 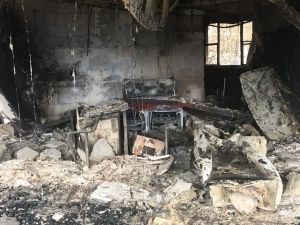 Laura and her family lost their home in Kangaroo Valley when bushfires hit in the Summer of 2019-2020.

Laura says the family was in shock when they returned home. “There was nothing left standing, not a blade of grass. It was an unbelievable sight ... no house, a few plates in the rubble. The sheds were just little piles of molten nothing,” she says. “We were just speechless. It was like a bad dream. There was no sign of life. It was so quiet – no birds – an awful choking smell.”

Laura says she and the family also felt incredibly lucky. “I know our friend [on their property] has seen a lot in his life, but he lost most of his possessions and he experienced the terror – the absolute terror – of this fire. It was a near-death experience for many people, I’m sure.”

Through that time, with fires blazing all over the state and country, Laura says she felt she had “to do something” and decided to start a fundraising page.

She explains: “The Salvos were the best way to do it, we thought. The way they operate, the way they help. We just like the ethos. We nominated The Salvation Army Bushfire Disaster Appeal as our charity, as they were already on the frontline assisting volunteer firefighters and those who have lost their homes and loved ones.”

With huge support from family and friends in the United Kingdom and USA, Laura had initially hoped to raise “maybe $5000”, but was surprised and delighted to raise over $127,000.

During the fires, now known as the ‘Black Summer’, Salvation Army teams were supporting first responders and evacuees, plus working in relief centres up and down the NSW and Victorian coast.

A group of passionate Kangaroo Valley locals, who Laura describes as “a fantastic group of people”, set up their own drop-in and help centre after the fires – with food, clothes, pet feed and more.

At around the same time, Laura contacted Emily, a Relationships Manager from The Salvation Army, to let her know about the funds her family and friends had raised. Laura also asked if some help could possibly come to Kangaroo Valley, including help with paying rent on the community space being used as the local drop-in centre.

In response, Emily organised for Lieutenant-Colonel John Hodge, a retired Salvation Army officer, to travel to Kangaroo Valley to train existing volunteers. The Salvation Army also covered some of the rent for the centre.

John has been a Salvation Army officer for more than 40 years, with experience in disaster relief during the 1977 Granville train disaster, many Australian bushfires, plus international disaster support. He had also recently helped at a bushfire relief centre on the NSW South Coast.

“Kangaroo Valley is a beautiful, tight-knit community and one of the advantages of that little neighbourhood centre was that they were not only giving out material help but also sharing friendship and a listening ear. It was lovely,” says John, whose grandfather was coincidently born in Kangaroo Valley.

“There were older people who would come in every day. The view was burned out and blackened, so they would just come into town for company.”

Over three days, as well as training volunteers, including a team from Canberra, John was able to organise $80,000 of immediate assistance for fire-affected locals.

He says: “We helped the people who had lost homes and also those evacuated under ember attack. One person had no electricity and had lost all their stock, others had lost everything – homes and businesses.

“They all had experienced trauma. There were some horrendous stories, [and some of] guilt – of people who still had their homes when all the neighbours had lost theirs.”

John says January 2020 was a sobering post-Christmas period for many.

“I am sure many in Kangaroo Valley lost all their Christmas gifts in burnt homes,” he says. “I heard more stories of Christmas loss, though, in Batemans Bay.

“There were kids that lost everything. What really broke my heart was that some obviously came from already disadvantaged families. One had lost their brand-new school uniform – they had received it as their main Christmas gift. But we were really able to help. People were genuinely grateful.”

A listening ear and the chance to talk and, for some, to pray together, was for many more important than the material help. John says: “I was concerned also for their spiritual and emotional support.”

For Laura, the regeneration of nature and generosity of others has given great comfort. “Within days we saw signs of life,” she says. “The initial shock, horror, sadness and crying all the time, soon gave way to absolute fascination as to how the bush has regenerated. And now birds are back. It is very heart-warming.

“And I think [the experience] has shown me The Salvation Army is a marvellous organisation ... it was great that they were able to get to Kangaroo Valley and really help out.”

Naomi Singlehurst is Content Specialist - Mission, for The Salvation Army