You are here: Home › Features › Love For All 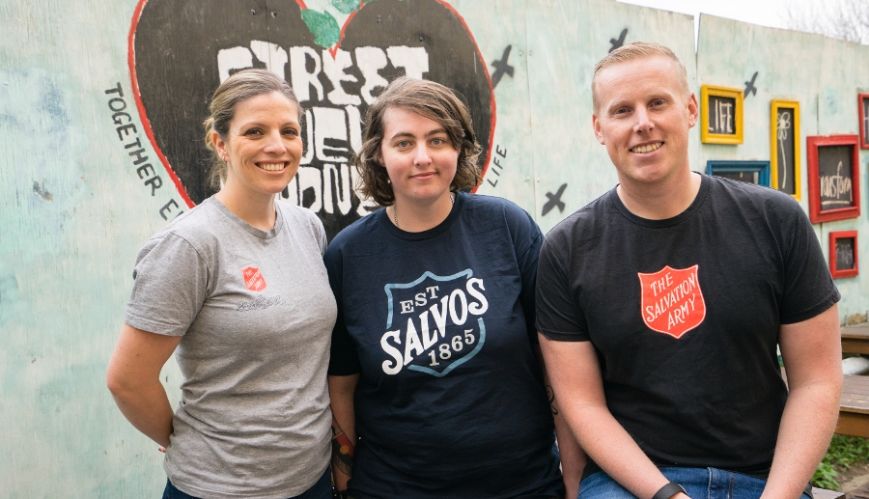 Sydney Streetlevel mission leaders Robyn and Mitchell Evans with Lena (centre), who says the centre in inner-city Surry Hills ‘is home for me’.

Midday ... and it’s lunchtime in Sydney on a cold and showery Monday. Pumpkin soup, meat pie or quiche with potato mash, cheesecake and fruit salad, tea and coffee. $2 the lot. Not bad!

We’re at The Salvation Army’s Sydney Streetlevel centre in inner-city Surry Hills, a few blocks from Central Railway Station. They serve a midday meal – and breakfast – every weekday to the homeless, public housing tenants and anybody in the area who needs a little bit of help, a hand-up or just some happiness.

I meet Ronaldo as he waits for his lunch. He’s been coming for a long time, he tells me – maybe 20 years. “Two dollars a day is a bargain,” he says. “It would cost me $80 a week if I had to look after myself. I like the people here.”

Barbara is here, too. She’s just called in for a cup of tea and “to get off the street for a while”. She’s been upset by some serious police activity on the streets. “It’s been very noisy, very unnerving. I need to settle a bit,” she says.

Others are coming down the narrow laneway at the corner of Albion and Crown streets and into the centre, most of them on their own. Some sit by themselves. Others are more confident in conversation and join somebody at a table. They all have a story to tell. Most, though, are reluctant today to reveal too much.

Streetlevel mission leader Mitchell Evans, who shares the role with his wife, Robyn, is trying to encourage more communication around the tables. Some people struggle, he says. Not everybody has social skills.

“We play games around the tables to encourage social interaction. We are seeing good signs,” he says. Mitchell and Robyn (pictured) have been the Sydney Streetlevel mission leaders for six years, after being raised in a fairly traditional and conservative Salvation Army environment at Parramatta Corps.

He was an information technology consultant and she a social worker in mental health, living in a lovely three-bedroom sandstone home in the suburbs, preparing to raise a family, when God called and sent them to the inner-city. Now, they live with their one-year-old son in a small flat above the Streetlevel building.

“We’re trying to create a place here where anyone can come and feel comfortable,” Mitchell says. “We’re providing a safe place for people with all sorts of personal issues; a place where people can come on their best days and their worst days.” Robyn says she wants to be “a faith example ... somebody who is accepting of everybody.” And she wants everybody at Streetlevel to know that they are accepted, no matter their circumstance. “We’re a corps with social-based ministries,” she says. “We don’t call people soldiers, adherents or clients. We call everybody here a community member.”

Monica (pictured below, right) is serving in the cafeteria kitchen. She’s been here since early morning, starting with breakfast and now lunch. Like Mitchell and Robyn, Monica has been at Streetlevel for six years. Before that, she worked for The Salvation Army at the Foster House men’s shelter and Stead House student accommodation. 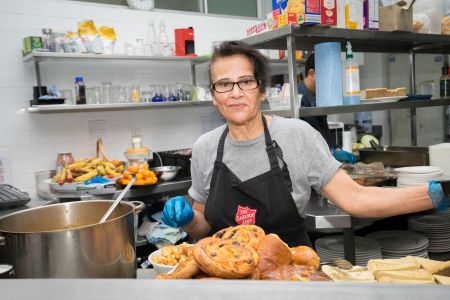 In all, she’s been with The Salvation Army for 20 years. Born in Beirut but an Aussie for the past 40 years, Monica sees the people who call at Streetlevel for support as her “family”. “There are a lot of sad and lonely people here,” she says. “My job is to make them feel loved and at home.”

Before lunch is served, people are on computers, washing their clothes, taking showers, chatting around courtyard tables outside and collecting mail, which they can have addressed to Streetlevel. As well as breakfast and lunch every weekday, there are regular activities for women and children, a hairdresser called Wanda cuts and grooms hair every second Wednesday, Centrelink staff call in to offer advice, a financial counsellor provides assistance, there’s a clothing and furniture store and a food market where assessed people can buy products at bargain prices or get emergency relief.

Streetlevel also operates some of the activities at its nearby Waterloo centre. And there’s a Friday night church service held at The Salvation Army’s nearby Redfern headquarters, which is attracting people further afield than Surry Hills. “We want the people who come here to meet Jesus,” Mitchell says.

Lena met the Lord through Streetlevel. She’s a single mother, turning 30. Her life has been a tragedy – almost unbelievable. Lena was born in Brisbane. She has never met her mother, but has spoken to her on the telephone a few times.

As a newborn, Lena was taken home from hospital by a man who was listed on her birth certificate as her father. Years later, she discovered that the man was not her father, but a friend of the family.

She lived with the man and her mother’s parents. There was a disagreement and Lena moved to Newcastle with the man to live with his parents. She grew up distrustful of everybody.

“People were supposed to look after me, but they didn’t. So, I didn’t care about anybody,” she says. “I learned myself that the only way to resolve anything was to put my fists up. It got me into a lot of trouble.”

When she was eight, she met her “real” father. DNA testing a few years later, she says, proved he was who he said he was. She discovered three brothers. Lena left home and school at 15 and “lived around” – on the streets, in parks and cars, in refuges, wherever she could. She was evicted from several refuges for violent activity.

She moved to Sydney and met some Salvos at a street food van. They referred her to The Salvation Army’s Oasis centre for young homeless people. There she met Major Paul Moulds. “Paul tried hard to help. But I didn’t trust anyone. So, there was no way I was going to let him get close to me. He suggested I come to Streetlevel. I came, but I got kicked out for being, well, not nice.

“I turned up drunk at Streetlevel one night. Paul took me for a coffee and told me to pull my head in and grow up, otherwise I would be dead before long.” She was pregnant at 20. After the birth, Lena took her son – now 10 – and lived with her “adoptive” mother in Newcastle. There was more trouble and Lena was “kicked out”.

Her son still lives with Lena’s adoptive mother and she sees him occasionally. During a good period, Lena became a soldier of the Sydney Streetlevel Corps. “But I’ve blown it many times with drinking and partying,” she says. Her father and brothers were killed in tragic circumstances last year. She found their deaths hard to handle.

When we caught up with Lena for this story a few weeks ago, she was back at Streetlevel after “a long break”. Robyn Evans had called her and she had “come back”. “I know that this place – Streetlevel – is home for me,” Lena tells me. “Despite what I have done, I know that they will accept me back. I know that they love me and want the best for me.”

Nina (pictured below, right) has a similarly tragic story, growing up in a family, she says, who tortured her with burns and cuts.

“Mum and Dad told me many times that I was really adopted and was never meant to be born,” Nina says. “I didn’t attend school much and left home as soon as I could.” 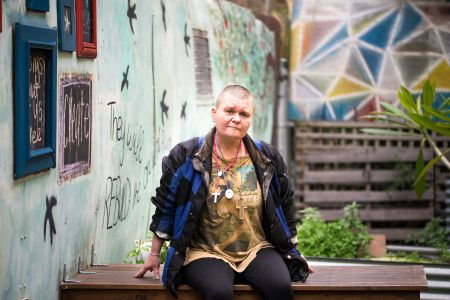 She spent many years as a homeless person, in violent relationships, and believing nobody really cared. She had two stillborn babies. “And then I found this place [Streetlevel]. These people are my family. Just little things they do here make a huge difference to my life. They have shown me that I can trust God – and I do. I always have, even though terrible things happened to me.”

Nina now sings in the corps worship team. Lena is helping with the Streetlevel community. They and others like Ronaldo and Barbara are the beneficiaries of Monica’s love and “family approach”, Mitchell and Robyn’s God-inspired “acceptance of everybody” and the support of so many team member.

The acceptance, support and love start at the front door. There’s a man – called David – who sits at reception three days a week. He was there the day we called in. He’s very friendly. David is a semi-retired IT consultant. “I used to get paid to increase the profits of large international companies,” he tells me. “Now, I get paid to love people. How good is that!”