You are here: Home › Features › Music Therapy A Big Hit At Preston Salvos 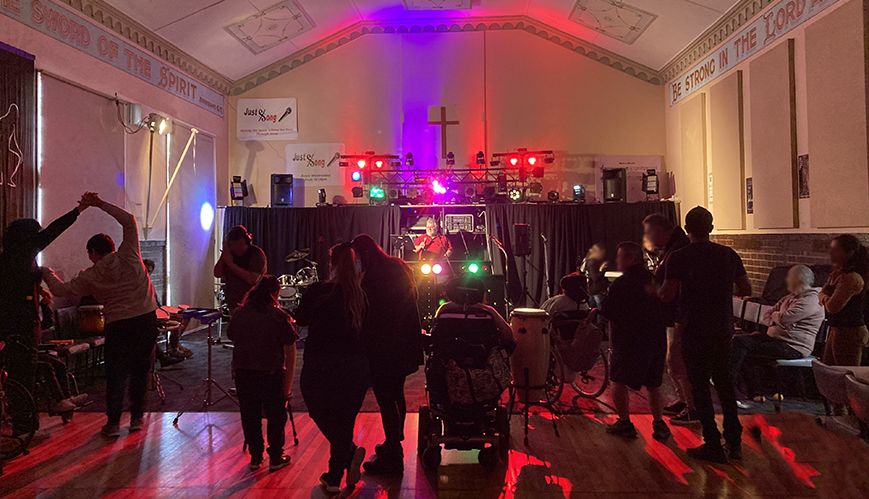 Wednesday mornings are a highlight at Preston Salvos when Stuart Lees hosts the JustSong music therapy program and welcomes differently-abled people into the building.

You know it’s a Wednesday morning at Preston Salvos when Stuart Lees grabs a microphone and begins to belt out a rollicking version of ‘Crazy Little Thing Called Love’.

With the lights dimmed and a smoke machine going off behind him, you’d nearly mistake this for a disco. In reality, it’s even better – this is JustSong, a music therapy program that engages up to 80 people every week who live with some level of disability. And, by the way, people are twirling across the floor and playing fretless instruments, and it’s clear they absolutely love it. Stuart worked as a professional musician for years before he started JustSong. He now uses his talent and love for music to help differently-abled people and seniors find community.

Stuart, the bandmaster at Preston Corps, is also the program coordinator of JustSong, and is passionate about his ministry.

“JustSong is more than a music program – it’s a socialisation program with music as the excuse to get people together,” he said. “It was initially designed for people with low socio-economic backgrounds so they could access musical activity, but in the past 22 years, it has developed into a two-stream program – disability and aged care.”

The folks who join Stuart every Wednesday count JustSong as the highlight of their week. Run as a private program hosted at Preston Corps, Stuart has connections with more than 40 care centres across Melbourne and many ‘bus in’ clients and their carers so people of all ages can enjoy the benefits of rock’n’roll.

JustSong was born in 1999 when Stuart and Major David Eldridge began the program at nearby Brunswick Corps. Every week they would travel to daycare centres with old instruments and a microphone, developing relationships that have lasted more than two decades.

Staff were quick to ask Stuart back when they witnessed how a few hours of music and socialisation would stabilise the mood of their clients through the week. And while the location and format of JustSong have changed over the years, it continues to be a ‘home away from home’ for people with different abilities or who are isolated and ageing. People of all ages and abilities participate in JustSong by playing the drums, fretless guitars, old keyboards, using fake microphones and simply dancing.

“Right in front of our eyes, we could see these relationships developing. I’ve still got people coming to the program who came 21 years ago. I’ve done birthday parties and all sorts of stuff!” Stuart says.

After a stint at Thornbury Corps, JustSong moved to Preston Corps last year, and Majors Peter and Tara McGuigan happily included the vibrant program into their weekly schedule. While the program paused due to COVID, as soon as restrictions eased, clients were rushing to the door (sometimes quite literally), eagerly embracing one another and moving to the music.

“Some people don’t show mood or feelings well. But with music, everything changes. You see the smiles – you get them to dance, and you get them to focus,” shares Stuart.

“All the music we use is stuff they are familiar with – middle of the road rock’n’roll. I sing what suits me, and over the years, we worked out what types of music don’t work. If I play too many ballads, they would be literally going to sleep!” he laughs.

Spend one morning at JustSong, and it is clear that this is more than a program – this is a reflection of the community and inclusivity Christ modelled to his Church. And that, says Stuart, is why it is so powerful.

“I’m not smart enough to come up with this myself. It really is a God-given program,” says Stuart. “It’s a very needed program. We need connection, and music is just a powerful thing for people. It just works.”

JustSong is currently on hold in the COVID-19 season.