You are here: Home › Features › Our Emergency Services Better Equipped To Serve The Salvation Army partnership with Woolworths has been integral in equipping our emergency response teams (SAES). 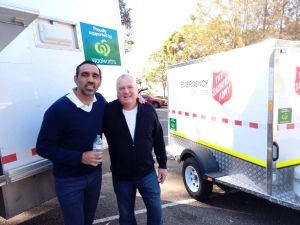 The Salvation Army’s capacity to serve during emergencies and disasters has been boosted with corporate partnership and bequest funding to procure a new fleet of catering trailers, trucks and other equipment.

Major Topher Holland, The Salvation Army General Manager of Strategic Emergency and Disaster Management, said the design of the new equipment incorporated learnings from the recent prolonged bushfire season that devastated many parts of Australia. He said the new equipment would give teams the opportunity to train with it during the winter ‘off-season’ months.

“We are so thankful to partner with Woolworths,” Topher said. “Woolworths believes in The Salvation Army and our work, and their partnership allows us to be prepared and to serve the community with the funding and equipment that we need.”

Brad Banducci, Woolworths Group CEO, said: “The natural disasters that have taken place in recent years have been devastating for so many Australians. Thankfully, through the drought, floods, cyclones and fires, The Salvation Army has been there to help, and we are proud to partner with them to support communities through those tough times.”

New South Wales, ACT and Queensland Salvation Army Emergency Services (SAES) teams are updating their food-service trailers that are used to cater for emergency services personnel or members of the public during emergencies and disasters or at public events.

Norm Archer, The Salvation Army Strategic Emergency and Disaster Management Coordinator for NSW/ACT, says trailers for his states have been completely redesigned, driven by the need to be more adaptable and flexible. The trailer is used as a transport device and all catering gear is easily accessible and removable so that crews can set up at any location. Inside the trailer are things like a gazebo, trestle tables, a wheel-out barbeque, hot-boxes, ice boxes and hand-washing and sanitising capability.” 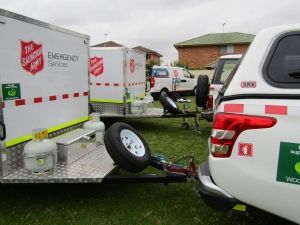 Some of the new trailers that are heading for Salvation Army Emergency Services teams in NSW, ACT and Queensland.

“If the best place to set up is under the pergola at the back of the community centre we can set up there. Or we could set up in a farmer’s paddock or in the car park of an industrial area – we can set it up anywhere,” he said.

“Recently, one of the new trailers was tested at an evacuation centre exercise in Western Sydney. A crew of eight SAES volunteers who hadn’t worked together before opened the trailer for the first time and two hours later fed 96 people a meal of meat with three veg and gravy.

“We’re really happy that we can resource our corps in this way, giving them a flexible model of emergency services trailer to support their communities in times of need.”

In Queensland, a redesign of SAES trailers has also been undertaken, with Adam Cole, The Salvation Army Strategic Emergency and Disaster Management Coordinator for Queensland, saying they are very different to the existing yellow trailers they are replacing.

“They are a self-contained unit with an onboard fridge, which means onboard power – solar power – and we still have the same large barbeque. You can turn up to a situation, open up its doors ... you have the capacity for shade and shelter to work under, you have lights, you can put a gazebo or two nearby and some tables and you have the capacity to cater very quickly for large numbers of people.”

Queensland SAES has also purchased two deployable shelters, GPS units with satellite communication capability for when crews are operating in remote locations and new uniforms for some locations. The Salvation Army in the Northern Territory, while experiencing its fair share of disasters due to cyclones and monsoonal flooding, had very little dedicated equipment. Soon, it will take delivery of a catering truck, a portable cool-room trailer and a Toyota Hilux to assist in getting to remote locations when disaster strikes.

“We are thrilled to finally be giving our dedicated volunteers the equipment they need to do what they already do so well,” said Northern Territory Area Officer Captain Erica Jones.

“This equipment will be used for a two-fold purpose,” she continued. “For our cyclone season up here in the Top End and also for our dry season Indigenous burns where parts of our bush burns for six months. Now we can partner with our rural fire brigades to provide catering during that time.”

Erica said two of the Northern Territory’s SAES volunteers work in remote Indigenous communities and will be used as key contacts to get supplies to those communities if needed in an emergency using the new vehicle.

“And we are also excited about partnering with our territorial public relations team to help with the successful market outreach when the equipment isn’t being used for emergencies,” said Erica.

Tasmania’s SAES took delivery of a new, smaller catering truck in 2019 which is now being fitted out with cooktops, an oven, a ‘bain-marie’, fridge-freezer, a hot water zip heater and fixed stainless-steel shelving.

“Previously, we would go to incidents and we had to be out in the elements,” said Gary. In Tasmania, ‘the elements’ can mean sub-zero temperatures or 40-plus degree days! “During the Huon fires last year we were there for 13 days and served 10,000 meals and we really struggled,” he said. “The wind was that strong it was blowing our gazebos away and ripping them. Now, we will be able to make all the food within the truck in that enclosed space.” 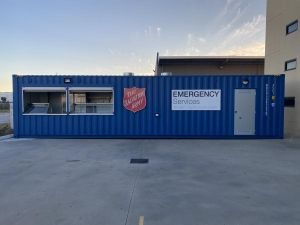 The Salvation Army in Western Australia has constructed a shipping-container kitchen, which can be moved on a truck to locations where SAES teams are required to provide catering for extended periods of time.

Local fundraising initiatives have also enabled the Western Australia SAES to build a shipping-container kitchen, which can be moved on a truck to locations where teams are required to provide catering for extended periods of time.

“When we have a major incident – like we seem to be getting more and more of these days – or a long duration event like we had recently supporting the police during the COVID-19 roadblocks, we can lift the container and take it wherever it needs to go.”

“This is a massive resource boost for emergency services in Western Australia,” said Ben. “We will be gearing up over winter, training our volunteers on how to use the equipment, and recruiting more volunteers ready for next summer.”

But while Ben is excited and grateful for the new equipment, he is praying that there won’t be as much need for it next summer as there was during 2019-2020.