You are here: Home › Features › Outback Truck Of Hope Majors Denis and Kathleen White talk about their unique ministry to remote Aboriginal communities in South Australia and the Northern Territory.

Every few weeks, for the past eight years, Adelaide-based Salvation Army officers Majors Denis and Kathleen White have climbed into a 16-tonne truck they have packed to the brim with quality second-hand furniture and clothing and set off for the Australian outback.

Their destination is several remote Aboriginal communities across the top of South Australia and the south-western desert of the Northern Territory. Here they ‘set up shop’ in small communities and sell the furniture and clothing at a reasonable price, a system which has proven successful in building selfsufficiency and dignity in the people.

In 2011, the Whites were appointed as Divisional APY Lands Coordinators. APY stands for Anangu Pitjantjatjara Yankunytjatjara, a region approximately one and a half times the size of Tasmania. “It’s a wonderful adventure!” says Denis. “The Aboriginal people in Central Australia are the last, the least and the forgotten. [When people consider] cross-cultural ministry as a whole, they think of [work] overseas, and people have no idea of the condition of things there in Central Australia.”

More than a decade ago, the South Australia Government began funding the construction of dozens of houses in each Aboriginal community in the APY Lands. But a major problem arose – the houses stayed empty.

They are so remote that getting things like beds, fridges and washing machines delivered is cripplingly expensive. And this is where the Whites and their truck come in. Denis says on one early trip he sold everything in the first couple of hours in one town alone, and the people were pleading for more.

Since being commissioned as Salvation Army officers three decades ago, Denis and Kathleen have served as corps officers in Victoria, missionaries in Papua New Guinea and court chaplains in South Australia, but their time in the APY Lands is their most challenging and rewarding appointment yet. 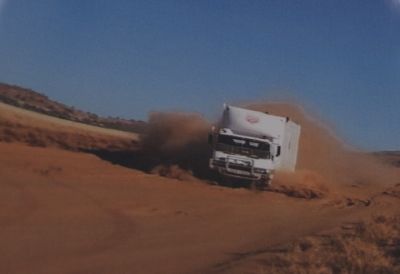 The hardest part is leaving their family behind for nine weeks every year to meet the needs of 2500 people in the APY Lands, covering thousands of kilometres each trip. “A quick trip takes a week,” Denis says. That leaves two days for driving each way, a day for set-up, and a day for their ministry.

This sounds like a challenge in itself, but the Whites admit the most complex aspect of their ministry isn’t the time spent on the road or in the sweltering heat of the Outback – it’s the process between each journey in their precious weeks at home.

This is when the couple source high-quality, second-hand furniture, clothes and reasonably priced electronics for their next trip. The Salvation Army’s work in the APY Lands began in 2008 when Major Henk Fernee (now retired) spoke to South Australian Housing Authority and the elders of these remote communities and learned about the desperate need for basic furniture.

Henk got the ball rolling and began the process of sourcing goods in Adelaide and delivering them to these communities. When the Whites took on the role eight years ago, they decided to add a spiritual component, which has opened up many ministry opportunities. “Kathleen and I set out intentionally to emphasise the Christian side of the work,” Denis says.

“We spoke to the elders and on each trip we involve them to do announcements, pray in language and explain that The Salvation Army is a Christian organisation. We view the furniture/practical provision like Paul’s tent making.

“Spiritually, it’s opened doors up for us to pray with people. And because we were court chaplains, we’ve had a lot of Aboriginal people ask us to pray for their sons and daughters who are facing court, in prison and also for healing. The loveliest thing is working with the Bible translation [through the United Aboriginal and Islander Christian Congress] and seeing it transform lives.”

The Whites work closely with the elders of each community, who indicate specific practical needs. They also say that giving people the opportunity to pay for, or pay off items through a Centrepay plan, gives the Indigenous people a sense of pride and ownership in the items they purchase.

But no matter how tight the Whites pack their truck with the help of volun - teers, there are always people at the end left needing more. And that is the most challenging part of the ministry.

“The verse where Jesus talks to the disciples and he says, ‘You will always have the poor’, we see that. We do so much to help, and yet there are still disappointed people at the end of the sale. And as much as we want to help them, we can’t. That’s the hardest thing,” Denis says.

“The government keeps building houses, but we can’t take enough furniture to keep up with the need. Often up to three families stay together in a house and that’s a tension – they stay together, there’s water and food and shelter and a kitchen … and then nothing.”

The Whites’ journey with the people of the APY Lands will come to an end early next year, when they take up new appointments. The Salvation Army will continue to work with the APY Lands communities to determine an appropriate response going forward.

Jessica Morris is a writer for Others.