You are here: Home › Features › Qanda With The General

Q&A with the General Q&A with the General

The General speaks with Lieut-Colonel Laurie Robertson during the Still Others event. Photos: Cazeil Creative

A new Australia Territory, the need for more officers, reviewing the Soldier’s Covenant, women in leadership, the LGBTIQ community, and embracing young people in The Salvation Army. Lieut-Colonel Laurie Robertson engages in a wide-ranging discussion with the world leader of the Army, General Brian Peddle.

Laurie Robertson: Australia has been on a journey to one territory again after almost 100 years of being two. There’s been a lot of work to get us to this starting point. Now, what do you think The Salvation Army in all its layers needs to do from this point on?

Brian Peddle: I want to go back a little bit if I could. I showed up in Australia two years ago to announce on behalf of the international Army the coming together of the two territories – Australia One. I was intrigued at that particular point with regard to the possibilities that were being presented with two territories coming together, one nation, one voice, one Salvation Army moving forward together. I want to say to Australians particularly that this is the beginning of something absolutely incredible. I believe it’s God-ordained. That means it will be God-blessed. If Australians, officers, soldiers, engage, put their shoulder to the wheel, I think we see in the future a stronger, vibrant, growing Salvation Army for the betterment of this nation.

Is there anything practical that ... if I’m a Salvation Army soldier, what’s going to be different for me?

One of the things that’s happened over the years is that many of the roles that our Salvationists previously did are now having to be done professionally. What do you think is the role for the soldiers and the friends and adherents of the Army in the future?

I don’t have any difficulty with the fact that Salvation Army officers will always be needed, covenanted, ordained, and equipped to serve as clergy in The Salvation Army. We still need our soldiers to be called people of God. But we also need people who can come alongside us with expertise and professionalism that we don’t necessarily have within those two groups that I’ve just referenced. What is really neat about that, in my view, is that many people choose to work with us because they believe in our message. They believe in our mission. I’m absolutely excited as an international leader that around the world and even in Australia there are countless people that are finding their vocational calling by working with us in advancing the gospel and advancing the mission. I’m not the least bit intimidated by that or challenged by that because I think that together, all of that mixed in together – officership, soldiership, employees, volunteers, friends – we’re all making possible the mobilisation of The Salvation Army in our communities and in this nation. 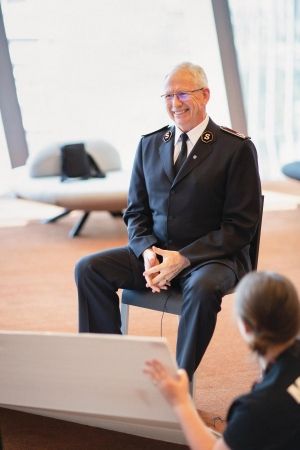 As you said, in our community and in our nation. Is that the role of the Salvationist, to actually make a difference in the community?

I sure hope so. Salt and light is just that. I hope that Salvationists, the 27,000-plus of you Salvos here in Australia, will actually take seriously that you have a responsibility to make a difference in this nation.

You mentioned officers are needed. Officership is changing a lot as well. Why would someone want to be an officer?

I believe that’s so for many others as well. I think in the age in which we are living, Salvation Army officers are taking a different place than we did when I began 41 years ago. We are very much community-centric. We are very much aware of social issues and social needs. We ought to be fronting up and saying hello to our politicians and influencing how they react around tables of policy and so on. Still, we have the preacher on Sunday. We still have to get by the bedside when somebody’s sick or dying. We still have to do the traditional pastoral care of people.

All that mixed in together, you want variety of life? Join The Salvation Army, become an officer and see what happens.

Has there been any thought in recent times to look at the Soldier’s Covenant and review it? Again, why would someone really want to sign up to be a soldier?

I think there are systemic problems with how we’ve presented soldiership. Yes to the first part
of the question; soldiership is being looked at in its presentation. The orders and regulations for soldiers is being written into a modern-day context. It doesn’t take away from the conduct and lifestyle and all of those kinds of important pieces that shape soldiership, but they have to be relevant for today. Soldiership was often seen as this is what you do to join a band or to serve in the corps, you have to be a soldier. I don’t quite view soldiership in the same way any more. I really believe that soldiership is a service-connected relationship with The Salvation Army. If

it is, then it has to be a calling, a calling to service, a calling to soldiership. It’s not mandatory. You don’t have to be a soldier to be a Salvo, right? We don’t want to lessen the significance of soldiership. Personally, I would lift it. I would ask young people: “Do you want to serve in this way? Do you sense God calling you to serve a soldier in The Salvation Army?” And let it be. That’s a faithfulness. That’s an obedient faith. We take it from there. 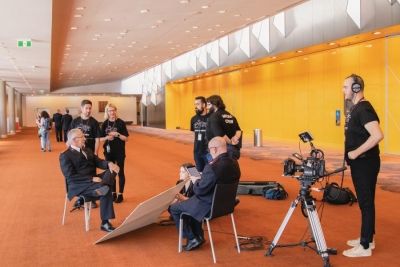 Preparing for the interview at Still Others.

There was an opinion piece in an issue of Others magazine a handful of months ago, ‘ The Soldiership Dilemma’, which ...

No, sorry, I’m not on that page. I did read the article and I’m not on that page. I’d lift it [requirements for soldiership]. I’d make it something quite significant for our young people, young people who want to identify with something worth living for or even dying for. It’s a cause; it’s a calling. If God’s calling me to that, don’t dumb it down.

I think that’s a very active conversation, one that’s been around the Army without a lot of acknowledgement or action. That’s not to cast an aspersion on anyone who’s preceded me. It’s just to say that today, the age that we are living in, I just don’t think we’re going to be able to acknowledge our numbers without giving opportunity for our ladies to take their place. That statistic of 60 per cent is international. It is particularly daunting when you look at our 17,000 active Salvation Army officers, that a very large number of those, more than 50 per cent, are female. A very large number of that group are, indeed, married officers. We have been viewed as an organisation, as a church that’s given a place to women. But I’m sitting here today fully acknowledging that what we have done is a mere pittance compared to what we should do if you look at the averages. It is not good enough. We do not have a proper number of women leaders, officers, trained and in position, comparative to the force that we have available. We are still a male-dominated army, which we have to face and deal with and change.

There’s much discussion around in our society at the moment regarding the LGBTIQ community and churches. Have you anything encouraging that you can say to us as a Salvation Army in how we engage in this area?

The first thing I want to acknowledge is that groups, churches like The Salvation Army, many of us exist in a context where we’re struggling with this particular issue. The extreme of the struggle is how inclusive can we be; same-sex marriage, opening up sacred membership realities, officership. It’s not at all possible to be that inclusive at this point. I think my concern for The Salvation Army is that we have yet to fully understand among ourselves how we actually feel about somebody who, for whatever reason, seems to be different than us. When I talk about inclusion, I’m starting at the very beginning where I’m asking Salvationists to welcome people into worship, into relationship, to understand, to listen to, and to be very dismissive about judgmental thoughts when we approach one another. The pain and the hardship that we’ve imposed upon those communities of people is absolutely wrong. We should not as The Salvation Army, or anybody else for that matter, be party to that. If there are things we don’t understand or if there are things we are uncertain of, we have to engage in dialogue. I was asked on the internet the other day, what’s my position on LGBTIQ people? That’s not a sensible question. I don’t have a position on anybody in the world. I know that Jesus died for the whole world. I’ve got to figure out how that application of grace, mercy, and love is made available to everyone. There’s no such thing as positive exclusion. But the Church struggles with some of the internal things of same-sex marriage and leadership in the Church and those kinds of things. We haven’t got that all sorted. There will be a time, but I go back and say let’s talk to each other about what we do understand, what we can do, what we can be as a Salvation Army that welcomes everyone.

For those who do call The Salvation Army their spiritual home, how would you encourage them to stay close to Jesus Christ? How they can keep on track?

How do you think The Salvation Army is embracing young people and emerging generations? 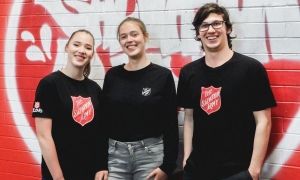 Some of the youth leading at Kwinana Corps.

Not well enough. I think we know of an Army of past days where our focus on children and young people, youth, was much more clearly defined than it is today. I look around the international Army and even in places where we’re bursting – Africa or Asia – we still have some real challenges as to how well we’re doing, because I watch the numbers and our engagement and our care for young people. In the ‘General’s Call’ that will be expressed to the international Army in January, there is in the call under the heading ‘Take Responsibility’. It’s a call to The Salvation Army to find its place in the care and nurture for children and young people and to position ourselves to embrace emerging leaders today. Our failure in this area will point to a weaker, lesser Army in decades to come.

Finally, what words, what encouragement, would you like to leave with Salvos in Australia?

I so long for an Australian Salvation Army that’s making such an impactful difference day by day
by day that the whole world would notice what’s happening in Australia. And that’s because Australian Salvos have simply said yes to God. That means there is nothing impossible. That means we notice when God is doing a new thing amongst us. It means that we’ve got obedient faith, and it’s in him.

Totally united as we go forward in Australia?