You are here: Home › Features › Reborn And Free After years of drug dependance and then recovery through The Salvation Army's Bridge Program, David Oliver is now following Jesus, happily married and runs his own small business.

David Oliver thought about suicide to end his long and debilitating dependence on illegal drugs.

“I owe my life to two people,” David tells anybody who asks about his past, “Jesus and Jayne Wilson.” And then, in deliberate and slow speech, he emphasises: “in THAT order”. Jayne Wilson had always appreciated the order in which David places her. She knew it was the power of Jesus Christ that enabled addicts to overcome. Her role, she would say, was to “suggest Jesus and then provide support”.

David’s parents, Noel and Margaret, sought help through the program’s family support group when their son’s addiction became too hard to handle. They had taken on responsibility for raising David’s two young children. 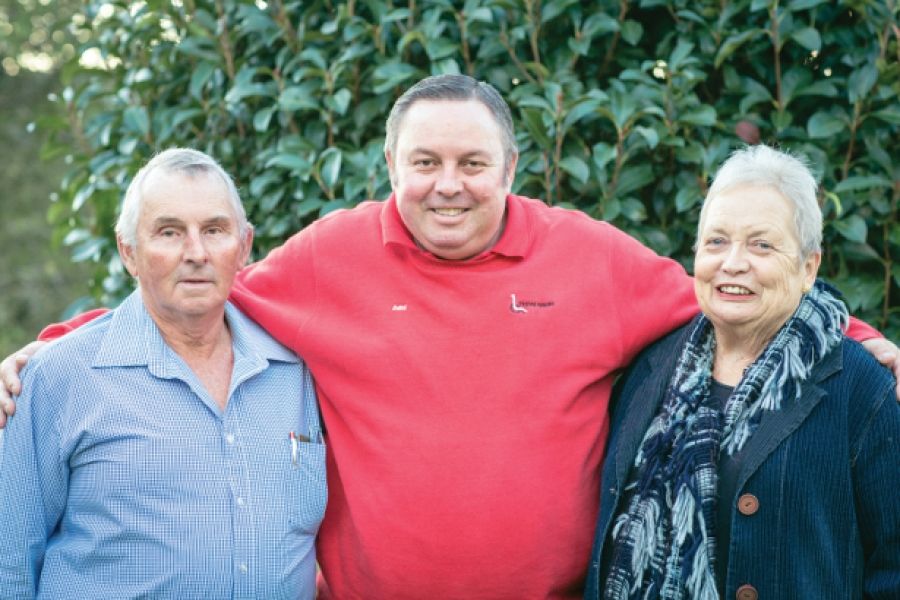 David's parents turned to The Salvation Army when they could no longer handle their son's destructive drug habit.

Now in his early 50s, David fell into a drug and alcohol culture almost from the day he started work at 15 years and nine months. He was an apprentice at the Port Kembla steelworks. “I found myself from the start fitting straight into a culture of working-class boys, where it was a constant competition to see who could drink the most alcohol. That led to pot (marijuana) smoking. It’s the kind of lifestyle I soon discovered leads down the road to ruin.”

The ruin was to last for the next 22 years.

In that time he met his first wife. She, too, was part of an alcohol and drug culture.
They had two children. David and his wife tempered their drug taking when the children came along – but not enough to stop the destruction of their family. Through his addictive lifestyle, David lost his marriage, his family, his home, his job with company car, and respect – both that of himself and others.

His parents agreed to raise David’s two children, then aged five and seven. Now alone, David dredged the depths of depression. He was unable to overcome his drug dependence. “I considered suicide. I was desperate,” he says. “I found myself crying to my father for help after spending all of my money on drugs. Dad said he was sorry but he couldn’t support me anymore. Mum and Dad had had enough. Dad said my only hope was to go and see Jayne Wilson.”

Noel and Margaret Oliver were, by this time, getting help themselves through the First Floor family support program. “I was desperate, so I agreed to see Jayne,” David recalls. “That’s when my life started to change.” After initial counselling, David agreed to participate in the William Booth drug rehabilitation program in Sydney. “Mum drove me to the William Booth centre in Sydney. She stopped at the front door and told me it was now up to me. Then she said: ‘Goodbye’.”

“On my very first night at William Booth, I noticed that somebody had strategically placed a Bible on a small table beside my bed. I flicked through it, but didn’t really understand any of it. I did not have a church upbringing.” He was advised by a staff member to start with the book of Mark. “Reading Mark was like a lightning bolt had struck. I had blamed God for everything that had happened to me up to this point. Mark helped me understand who God really was and what he wanted for my life. Well, I handed over my life to God there and then – my second day at William Booth. I now understand that I was letting go and letting God (take over).”

After a few weeks at the William Booth centre, David continued rehabilitation at Miracle Haven farm. He graduated 10 months later. “I loved life at Miracle Haven. It was the best time of my life. The mateship was amazing. I had already made the crucial spiritual decision to accept

Jesus before I got to Miracle Haven. Attending chapel was important to me.” When he left Miracle Haven in 2003, he “grabbed church with both hands”. He attended the Salvation Army corps at Berkeley (in Wollongong’s south), until he and some mates discovered

a singles group operating at a nearby Church of Christ. There, he met his second wife, Judy. They married in 2006 and remain active members of the church. David has a good relationship with his two children, now adults.

In December, 2014, David received a Graduate Certificate in Management (Professional Practice) after study at Charles Sturt University (Bathurst). He and Judy started their own business repairing mobility equipment for people with disabilities.

“My life is great now,” he says. “There are stresses – of course – in business. My marriage is great and there is nothing I would do (like returning
to drugs) to jeopardise what I now have. I am convinced, through my own experience, that there are a few things crucial to beating addiction. Jesus is at the top of the list. From the moment I handed my life over to him, he put my mind at ease. I felt safe and confident.

I just knew that with Jesus, I would make it. He is, after all, the Saviour of us all.

“I also think it is vital to deliberately change the culture in which you operate. I believe in the old adage that if you lie down with dogs you get up with fleas. That’s what had happened to me. I was lying down with dogs. After rehab, I refused to return to the drug dealers and users. I associated with good church people whose interest in me was to build me up. That’s where I am today – with Jesus and good church people.”

Noel Oliver says he learned several lessons from his son’s addiction. “The first was there really wasn’t anything Margaret and I could do
to get David off drugs. Another was the success of The Salvation Army’s process of treating people in Sydney and then at Miracle Haven over 10-11 months. Trying to dry out over two weeks doesn’t work. David also found something to believe in. He found God. That helped him to succeed.”

Recovery Services ask that corps, centres, THQ and divisional staff, and program participants dedicate part of this 24-hour period to pray for those in recovery. Their prayer requests are for those in addiction, for recovery services’ staff, and for corps, churches and centres.

Need help? For information on The Salvation Army’s various programs, including addiction services, go to www.salvos.org.au/need-help/