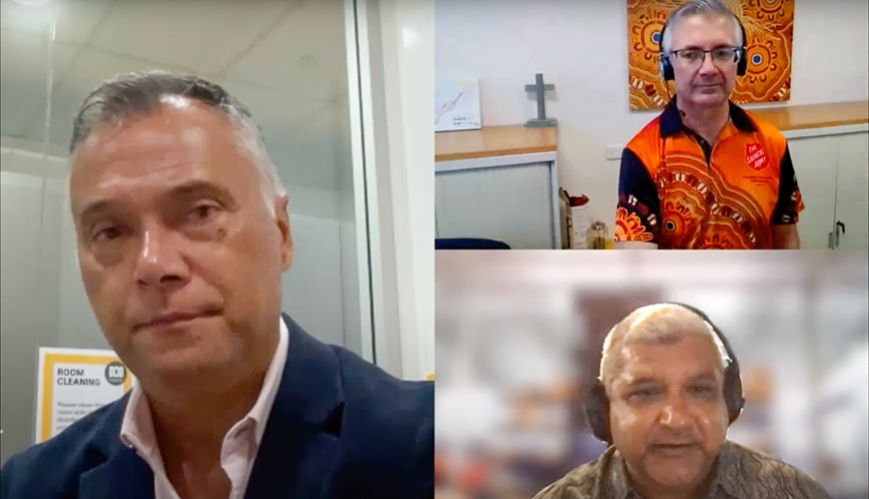 More than 600 participants logged in to a Salvation Army webinar during National Reconciliation Week (27 May to 3 June), with the theme ‘Be Brave. Make Change’.

The focus of the webinar was to explore how each of us can personally contribute to achieving reconciliation in Australia, valuing First Nations’ history, cultures and achievements, and how we can encourage each other to walk together towards a better future.

In introducing the discussion, Chief Secretary Colonel Winsome Merrett said: “My hope today is that you are able to take away some tangible actions that we can implement into our lives to assist in making positive changes for Aboriginal and Torres Strait Islander peoples. At the end of the discussion, we will put one question to you: ‘What is one action you can take in the move towards reconciliation?’”

The discussion panel consisted of Major Stuart Glover (Secretary for Mission), who led the yarn; journalist and writer Stan Grant; and Adrian Appo OAM – three Indigenous men who spoke from the heart.

Stuart warmly welcomed Stan and Adrian and commented: “Being brave and making change is never simple. One of the challenges we have in this journey of reconciliation is to do things that make us feel uncomfortable and that are hard. The ministry of reconciliation that Jesus calls us to is about bringing all people together under the love of God.”

Stan is a well-known television journalist and presenter and Charles Sturt University’s chair of Australian/Indigenous Belonging. He remarked that as a boy, he attended a little old wooden church outside Griffith, where his uncle was the pastor. “That was what inspired me,” he said, “the lessons I got in that little church, the lessons of Wiradjuri respect, the lessons of love and kindness and forgiveness, as well as a strength that never loses sight of justice.”

Adrian is a board member of The Salvation Army Australia Territory and has been awarded the Order of Australia Medal, Defence Service Medal, Centenary Medal and University of Technology Sydney Alumni Award. “The reconciliation journey is so important,” he said. “It’s not a story of black Australia and white Australia. The very term reconciliation insinuates that there’s something wrong. It’s not about you or me getting it right; it’s about how we walk this journey together.” 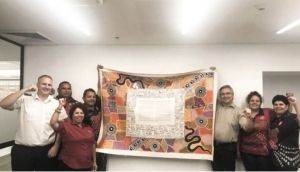 Salvation Army representatives with the Uluru Statement from the Heart, an official painted and signed canvas, which was presented to then Australian Prime Minister Malcolm Turnbull in 2017.

Regarding the Uluru Statement from the Heart, which has been in contention for five years, Stan commented that we get the statement wrong when we see it as a political document, adding that the voices of Australians would carry the statement, not the politicians. “I think the statement is a powerful faith document – it is a way of being right with God in this land.”

Stan’s comments were echoed by Adrian, who sees the Uluru Statement as a gift to the Australian people and questions how we can have a constitution that not only fails to acknowledge First Nations peoples but also has discriminatory practices within it, adding that many generations of Aboriginal people have fought for equal rights and recognition.

Stuart then repeated Winsome’s introductory question, asking, “What’s one real and tangible thing that everyone can do to be brave and make change regarding the Uluru Statement from the Heart?”

What we can do

Adrian mentioned that linking to the statement online and lending our support, plus writing to our local MP, may be small actions, but they are significant, as they signal the overall support of Australians to do the right thing. He added that if we share this determination with 10 other people, and those 10 people, in turn, share it with another 10, and so on, suddenly there is a movement, and we can build real power to the Statement from the Heart.

Stan agreed, adding that the statement is an invitation to stop and imagine if Aboriginal life – where First Nations peoples remain the most impoverished and imprisoned in the country; where there are inadequate healthcare and educational outcomes; where they have the highest suicide rates in the world, and die 10 years younger – was actually experienced by you, your family and your people.

In her closing remarks, Winsome said it is important that we continue to listen and learn and hear truth from First Nations peoples as we journey towards reconciliation.

“This has been an incredibly powerful and inspirational seminar,” she said, “and I want to encourage each of the more than 600 people who have joined us today to put those thoughts and inspirations into action, so we can make real, effective change for all Australians.”

To add your support for the Uluru Statement from the Heart, click here

Uluru Statement from the Heart

* We seek constitutional reforms to empower our people and take a rightful place in our own country.
* We call for the establishment of a First Nations Voice enshrined in the Constitution.
* We seek a Makarrata Commission to supervise a process of agreement-making between governments and First Nations and truth-telling about our history.
* In 1967, we were counted; in 2017, we seek to be heard. We invite you to walk with us in a movement of the Australian people for a better future.