You are here: Home › Features › Reflection Advent A Time To Expect The Unexpected

REFLECTION: Advent a time to expect the unexpected REFLECTION: Advent a time to expect the unexpected

Sometimes God has an entirely different and unexpected way of bringing his plans for us to fruition. Photo: Davor Denkovski

“Strange,” I thought, as I fished through my bag to find the keys to the front door. We had azalea bushes and a native ground cover growing in the garden along the front of the house – and many weeds that constantly called for my attention. But this day, I noticed a new shoot growing right near the front door that was neither weeds, nor azaleas, nor ground cover.  In fact, as I bent closer to look at it, it looked surprisingly like a tomato seedling!

I turned around and looked at the plants growing in containers along our front retaining wall.  We had gone to a lot of trouble to get special tomato-growing soil, had fertilised and nourished this mix, had filled six pots and carefully planted tomato seedlings in them, placing them in just the right position where they would receive just the right amount of sunshine and water each day. We had done the same thing with the garden beds at the back of the house. Yet, in these carefully nurtured pots and back garden, the seedlings were small and sad-looking, while the one growing near the front door looked a lot healthier.

“It’s not exactly the place for tomatoes,” I thought, “this is for flowers and shrubs.” But I didn’t feel like pulling it out like a weed, so I shrugged and went inside. Over the next days and weeks, this little shoot, popping up unexpectedly where it wasn’t really wanted (or nurtured), grew stronger and healthier. Meanwhile, the tomatoes we had carefully planted, and tended, and continued to look after – well, nothing much was happening with them. No matter what we seemed to do, they simply didn’t thrive. 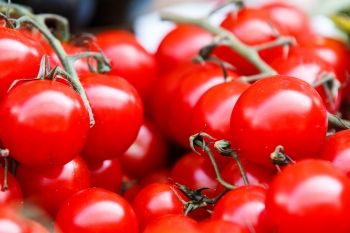 Providing food for thought and the table. Photo Thomas Martinsen.

As the ‘rogue’ tomato by the front door developed an abundance of flowers, and eventually loads of little cherry tomatoes, the others continued to struggle. Weeks went by and, despite all neglect, the cherry tomato plant by the front door yielded dozens and dozens of sweet, delicious tomatoes, and draped itself over azalea bushes and anything else lying in its path. The leaves started to look a little withered and dried out, but the fruit continued coming!

And the other tomato plants? Well, eventually we did see a flower on one or two of them, and one flower even developed into a tiny green tomato – but that was it! Despite all our plans and all our care, the only tomatoes we got that season were from the bush that wasn’t even planted, yet came up unexpectedly in the wrong place!

Not only did our unexpected crop provide food for our table, but it also provided some food for thought. This fruitful bush reminded me that it’s not always about my plans, my hopes and dreams, and even my efforts! Sometimes God has a whole other plan – and a whole other way of bringing that plan to fruition! Even when our attention and energy is concentrated in a different direction, God is often at work quietly (or sometimes not so quietly!) doing something totally unexpected to bring delight and joy to our souls and transformation to our lives.

In fact, it seems that much of God’s interaction with the beings he created is of an unexpected nature – he has a habit of bringing life into unexpected places, of calling people into unexpected behaviours, and filling quiet, dark skies with unexpected sights and sounds! All of this is in order to bring his plans and purposes to completion and to transform our lives with peace and joy!

This Advent season, we will be looking at how God has brought hope in unexpected ways, through unexpected people, in unexpected places. God is a God of the unexpected and loves to surprise us. Not only has he done this in the past, he still continues to bring hope when and where we least expect it and when we most need it. Let’s be open to receive this gift, even if it looks like a tomato bush in the flower garden instead of in the veggie patch!