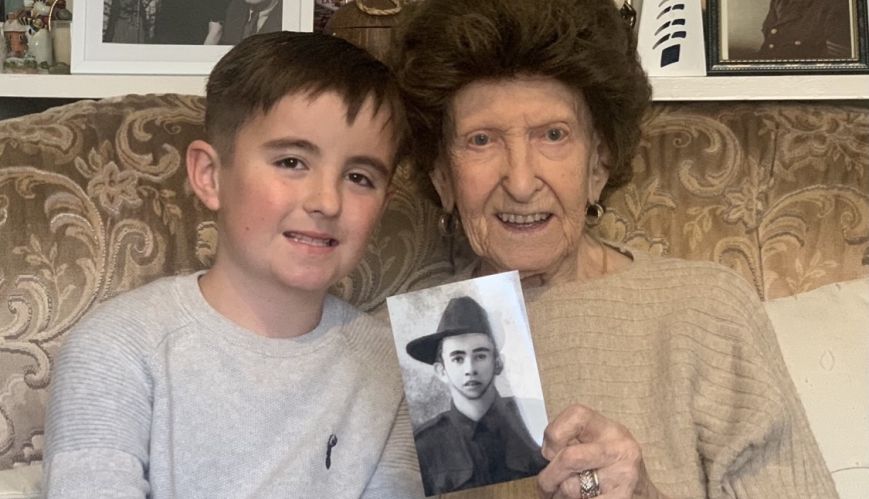 It took two decades for Mandy Golding to locate a photograph of her grandmother’s father-in-law, Noel Brinkley. Noel was an Anzac who survived the rigours, passions and tragedies of trench warfare and pitched battles. Here’s how Noel’s picture made its way back to loved ones.

Noel Clarence Brinkley (service number 2479) was a Salvationist from Magill Corps in South Australia. Noel was faithful in his duties; though he lived nine miles away, he was present as a bandsman and corps cadet to serve God.

A photograph that The Salvation Army published of Noel in military uniform shows a boy becoming a man; there’s an eagerness in his eyes, and an openness.

On 13 October 1915, Noel left Australian shores for France, with the 27th Battalion. He joined many other young men to fight, kill, bleed and perhaps die for kings and countries.

An acting sergeant when peace broke out, the young man continued serving as a sergeant-major and warrant officer in the Australian army.

Time is a harsh sea to swim through and, for many of Noel’s extended family in the United Kingdom, the end of the First World War is mostly where his story petered out.

British citizen Mandy Golding told The Salvation Army Australia Museum Manager Lindsay Cox that she had ‘been researching for 20 years, but my Gran, Jane Brinkley, has been waiting so much longer than that’. (Jane was married to Ben, Noel’s son.)

Mandy thanks Simone Brinkley in Adelaide (her great-grandad was Noel’s cousin) for her help.

‘My uncle went down to Tea Tree Gully to see if he could get anywhere,’’ Mandy adds, ‘when he visited Australia a few years ago.’ (Mandy’s late grandfather Ben was born in Tea Tree Gully.)

Mandy says her grandad never forgot about his family in Australia. ‘One day,’ she adds, ‘we will visit and lay flowers for Noel. On his headstone it says, “Too dearly loved to ever be forgotten”, and he has never been forgotten here either.’

When contacted by Mandy at the suggestion of The Salvation Army’s Heritage Museum in New York, Lindsay was locked down along with most of Melbourne, ensconced at home due to COVID, but he was able to remotely access his archival database. He researched Noel’s Salvation Army connections and discovered references to a photograph of the digger as a young man.

I was working as part of TSA Melbourne Project 614’s staff at 69 Bourke Street, deemed one of the governments’ essential services, so I was able to access the museum and retrieve the image for Lindsay to send on.

That photograph of a young man headed for war, once seen, stays with you. It’s stayed with me.

Lindsay arranged to get a copy to Mandy for her 102-year-old grandmother, who had never seen a photo of her father-in-law. The family was amazed; stunned by the physical resemblances they saw in Noel’s descendants.

‘Thank you so much again,’ Mandy replied, ‘and “thank you” doesn’t feel enough.

‘We took a photo of many family members, holding a photo of Noel, on Gran’s 102nd birthday… We are all quite emotional!

‘My Gran loves the photo; she couldn’t believe it. My grandson, children, mum, brother and uncle, we were all blown away. It’s been a team effort.

‘I cannot tell you how thrilled we are to have Noel’s photo.’

Mandy has placed Noel’s photo in her hallway; he’s reunited and ‘at home’ with other family photos. Seeing it never gets old. Noel’s bright-eyed, hopeful face reminds her and her family of young relatives.

‘Having never met him,’ she says, ‘it’s amazing how connected we all feel to him. I walk past his photo every day, and I always say “G’day!”’