You are here: Home › Features › Seven Reasons To Say No To Spy Racers

Seven reasons to say 'No' to Spy Racers 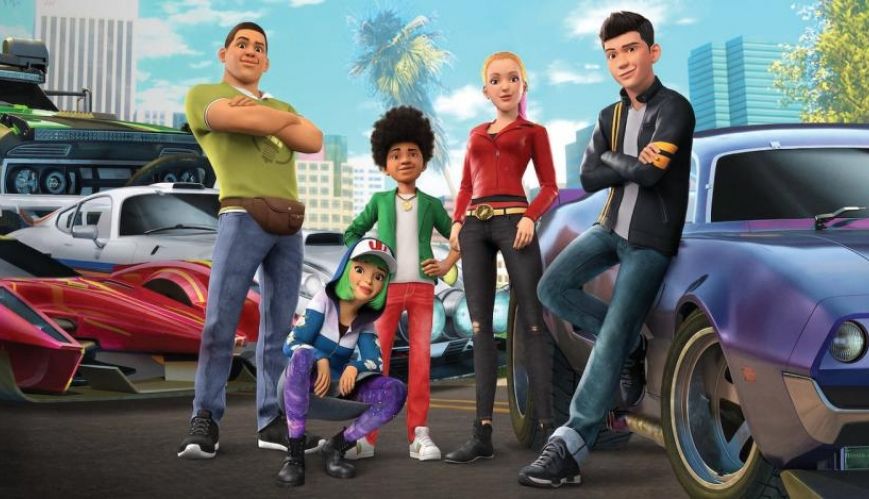 Seven reasons to say 'No' to Spy Racers

The Fast & Furious franchise has made the jump to children’s television.

The gold-spinning Fast & Furious franchise has made the jump to children’s television, bringing with it all the cautions associated with its films. Fast & Furious Spy Racers is being pitched at viewers who still have driving in their distant future. However, here are seven reasons why adults should be careful about putting this exhilarating cartoon in front of children. The series begins by introducing Tony Toretto, the nephew of original Fast & Furious hero, Dom (voiced by Vin Diesel). Arriving with him is an attitude that victory always goes to the bold. If you’re prepared to try hard enough, you can expect to win. A familiar American mindset, but one unlikely to deliver anything but false expectations to kids.

Tony’s team of terrific drivers includes Echo, a surly female speedster, Frostee, a clichéd ethnic tech genius, and Cisco, a monster of a boy in a monster truck. When he comes up against their teen nemesis, Mitch, his friends realise Tony’s car is dramatically underpowered. But Tony assures them the guy behind the wheel matters more than the four beneath him. Now every kid in a Hyundai is a backstreet hero.

One of series’ biggest problems pulls up before the first episode is halfway through. Tony and his friends are not just supreme racers, they’re street racers. This means their racetrack is any ordinary alley. In this case, in the middle of the day in a densely built up area. Conveniently, no one is about to be injured by their prowess, underlining the myth that urban racing is not just normal, it’s perfectly safe.

It’s worth noting at this point that Tony and his crew are so young, Frostee’s voice is still breaking. Tony himself has all the gangliness of a barely pubescent boy. The message is pretty clear. If you can see over the dashboard, you’re ready to drive. And our heroes affirm this pastime with the teenage grin that follows every win.

In Tony’s first race, his opposite number Mitch crashes spectacularly. We don’t see the impact or the wreckage, but it’s clear no injuries are sustained. Mitch enters minutes later munching on a taco. During a high-speed chase after suspected villains, Tony and his friends cut off numerous vehicles, cross to the wrong side of the road and send pedestrians scuttling. They also engineer the crashes of multiple motorcycle riders, sending them tumbling to the bitumen and into metal objects. Again, everyone walks away scratch-free.

Despite pitting our heroes against international spy rings, there is no sign of a gun anywhere. Most likely, the producers are avoiding firearms, even knives, because of the numerous school shootings in the United States. It’s just a pity they couldn’t stop short of weaponising the vehicles. Apparently, it’s only guns that kids should steer clear of.

“Remember,” Dom tells his adoring nephew, “don’t follow orders, follow your gut.” The Spy Racers live in a world where you have to trust your own judgement over everyone else. On the surface, this leads to a pretty casual approach to the law, which might seem reason enough to call the show into question. But deeper down, there’s a bigger problem. This sort of thinking puts not just the wisdom but the feelings of the individual over the community. When there’s no authority higher than me and no source of guidance wiser than my heart, it not only makes for a more selfish community, it leads to an awful life.

The target audience for this cartoonish drama may be still too young to drive, but that’s no reason for parents and grandparents to lower their guards. As Aristotle put it, “Give me a child until he is seven, and I will show you the man”. What we learn well when we’re youngest sticks with us for a lifetime. It’s the same reason the book of Proverbs in the Bible says,

“Train up a child in the way he should go, and even when he is old, he will not depart from it.” (Proverbs chapter 22, verse 6).

So, we could look at the characters involved and dismiss them as any good moralist would and feel justified in doing so. However, that would only put us on the same standing as the Pharisee who thanks God he’s not like that tax collector. Instead, we need to replace in their lives and ours a foundation built on Jesus’ words, beginning with we need what he has to give more than we need our own decency.

There are a lot of good things for kids to watch on Netflix, and doubtless, they all have their shortcomings. Yet there are few I have come across that are so comprehensively disappointing. Rather than switch the channel, though, Spy Racers might provide the golden opportunity to tell our youngest more about what they need than what they want.

Mark Hadley is Culture Writer for Others