Majors Brendan and Sandra Nottle are leaders of the 614 Corps in Melbourne with a passion for helping the vulnerable of their city. Photo: Bruce Redman

Brendan Nottle walked away from God and The Salvation Army when he was 17.

He was angry that God had allowed his mother to die. He was in Year 12 at high school. His father had died when he was five. His mother had raised him in The Salvation Army in Melbourne. Now, with his mother gone, he saw no sense in serving God or The Salvation Army. He moved to Adelaide for a new start.

On a Sunday afternoon, as he walked past Adelaide Town Hall, he heard music. He assumed it was a free concert. He went inside to investigate. It wasn’t a free concert. It was a Salvation Army congress. The preacher was Commissioner Eva Burrows, then-Territorial Commander of the Australia Southern Territory. She began to pray. Brendan Nottle wanted to leave, but stayed a little longer. He had his head bowed. He felt a hand on his arm. He looked up and it was Eva Burrows. She sensed he needed encouragement. Within days, he had reconnected with God and The Salvation Army.

Brendan returned to Melbourne, met a girl called Sandra at a Christmas party, married her, and, with his new wife became a Salvation Army officer and had three daughters. Now in his early 50s, Brendan, with Sandra, leads The Salvation Army 614 Corps in central Melbourne.

They operate from 69 Bourke St, where the Army has been since 1894. They have been the commanding officers there for the past 15 years. “There’s great history in this building,” he says. “(Army founder) William Booth preached here four times. You feel something special here. It’s inspiring.”

Major Brendan Nottle is the public face of The Salvation Army in Melbourne city. Sandra says her husband is a visionary; an ideas person. He sees himself as a bit of a rebel – a bit like the young William Booth engaging the established church of his day to get things done. “I think I carry within me that desire to be part of a movement that is always focused on the external,” he said in a 2011 ABC Radio interview.

He told Others magazine The Salvation Army was “called to leave the building and help the vulnerable”.

Sandra (picture below, right) is a child of Salvation Army officers. She was born in Tasmania, moved to Melbourne with her parents, and, to her recollection, has had a stable relationship with God and her church all of her life. In the same 2011 ABC Radio interview, she said of her mission: “There is a quote that says ‘I preach the Gospel of Jesus Christ and sometimes I use words’.” 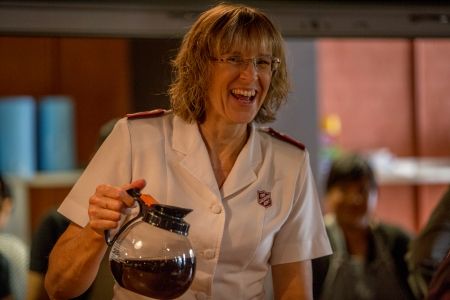 She is what she calls “the mother” of 614. She operates inside the building making sure everything is working as it should; making sure people seeking help are being looked after and that staff are safe. Sandra is “hands-on”. She will take their place if a staff member is sick or on leave. From that building, the Nottles and their team of 25 full and part-time employees, and more than 1000 volunteers, run cafes providing breakfast, lunch and dinner for hundreds of street people every weekday.

Many of the serving and cooking staff are volunteers. Every day, individual companies in Melbourne send staff to serve. There are hundreds of life-changing stories associated with the serving and sitting round the tables. 614 also operates a community work shed and craft programs for men and women. They have “rescue” teams on the street every night, keeping an eye out for people “at risk” – the homeless; the vulnerable. They partner with Collingwood Football Club to accommodate 120 people every night in 38 houses they call Magpie Nest (Collingwood are called the Magpies).

The program also provides assistance with psychologists, case workers, lawyers and addiction counsellors. Brendan has been Collingwood’s chaplain for 17 years. He’s busy. He likes it that way. He can get by with four or five hours sleep a day. The story is told of a friend, who also needs only a few hours sleep, who contacted Brendan for a catch-up. Brendan said the best he could do was 1am, 3am or 5am at McDonald’s, North Melbourne. The friend took the 5am appointment.

The Nottles have expanded the 614 horizons since they arrived 15 years ago. The name 614 reflects Isaiah 61:4: “They will rebuild the ancient ruins and restore the places long devastated. They will renew the ruined cities that have been devastated for generations.” The “ruined cities”, says Brendan, are people’s lives. “We don’t expect people to replicate what we have. We just encourage them to replicate the passion for the most vulnerable people in their community. For some, that will be family violence, addictions, whatever is the issue in their area,” he says.

Brendan Nottle is seen as a fighter for the rights of the homeless. In an ABC radio interview two years ago, he said of the city’s homeless: “I think they actually add to the colour and the movement and the fabric of the city.” By that, he says, he meant they should not be shunned, but supported. Later this year, he plans to walk, with others, from Melbourne to Canberra to raise awareness of homelessness. He wants politicians from all sides to formulate a strategy, then stick to it no matter which party is in power. 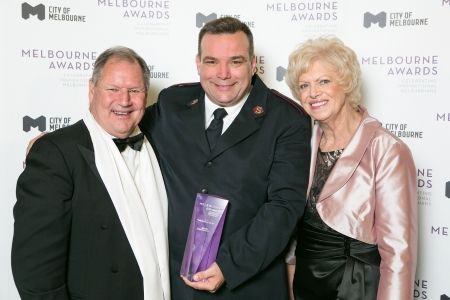 Melbourne Mayor Robert Doyle (pictured right with Brendan and Deputy Lord Mayor Susan Riley) named Brendan Nottle Melburnian of the Year in 2013 for his community work. The Mayor says the Major is an inspiration. Reporting the award, Melbourne’s Age newspaper observed of Project 614 that it was: “... essentially a mission to the many disadvantaged and troubled, the often forgotten citizens of the world’s most liveable city (as Melbourne was judged that year)”.

Former Salvation Army General, the late Eva Burrows, was so impressed with the work at 614 that in retirement – and in her 70s – she moved from her more conservative corps in the suburbs to volunteer alongside the Majors. General Burrows chose Brendan and Sandra Nottle to participate in her memorial service.

There are other recognitions, too, of Brendan Nottle’s community acceptance. He is a member of the Victorian Premier’s Ice Action Taskforce and the Housing Minister’s Rough Sleeper’s Roundtable.

Brendan told WarCry last year: “Sometimes a terrible time is when it’s a really cold Melbourne winter’s night and you see that your team is working flat out to make a difference, and, yet, the numbers (of homeless) are not diminishing; they’re increasing. Every now and again that becomes a dark night of the soul, when you think: ‘Am I doing something wrong; am I missing something’.” But then he recalls the words of former American President Theodore Roosevelt: “It is not the critic who counts, not the person who points out how the strong stumbles or where the doer of deeds could have done better. The credit belongs to the person who is actually in the arena, whose face is marred by dust and sweat and blood, who strives valiantly, who errs, who comes up short again and again ...”

At their Sunday morning worship service, Brendan and Sandra Nottle see some of the “lost souls” from the street praising God in song ... and they are empowered for another week on the front line.