You are here: Home › Features › Telling A New Story That Begins With Hope

Telling a new story that begins with hope 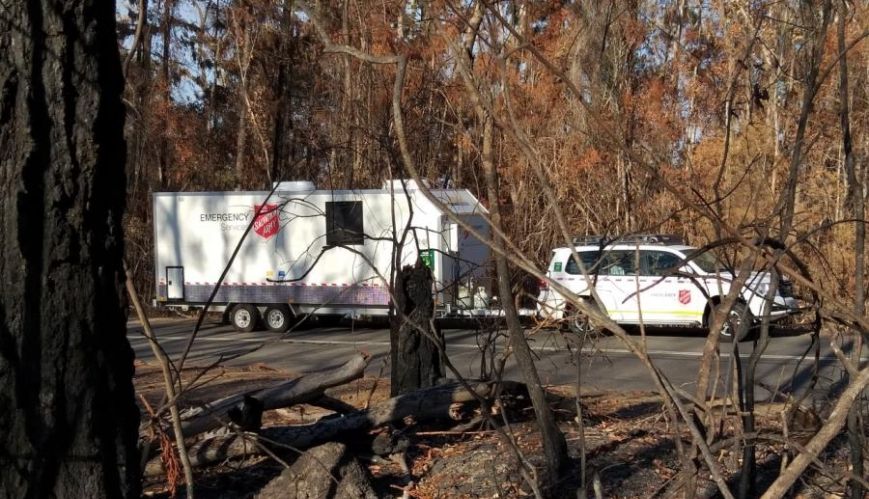 Telling a new story that begins with hope

Captains Leanne and Lincoln Stevens are travelling around NSW this month to assist smaller communities impacted by years of drought and recent bushfires.

Captains Leanne and Lincoln Stevens, Associate Strategic Emergency and Disaster Management Coordinators for Queensland, are taking their mobile office through New South Wales this month to support small communities impacted by years of devastating drought and, for some, recent bushfires.

The officers were ‘on the road’ for a similar mission in Queensland last December, a journey that took 19 days and covered 5109km.

“We were contacted by the Department of Communities, Disability Services and Seniors to provide financial and emotional support to smaller communities in the outer areas of the recent bushfires that had been impacted, but not necessarily eligible for any government assistance,” explained Leanne. 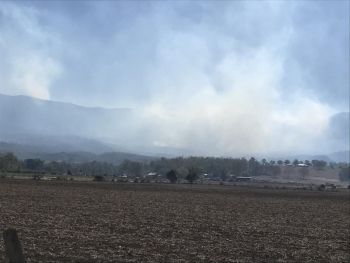 Fires are still burning in the drought-ravaged state.

Starting in Townsville in late November last year, the Stevens’ stopped in Yeppoon and spent three days working alongside the Department of Communities to meet the needs of community members who had lost their homes and suffered both financially and emotionally.

Below, Leanne shares some reflections from the journey:

We sat with community members who had been impacted by either evacuation on more than one occasion (some up to three times in 72 hours), and or smoke damage, loss of properties, and loss of outbuildings, including sheds that contained farm machinery, tools, cars, bikes and treasured containers of memories.

Some of these communities have populations of 20 to 60 people, some community members live off the grid, with no mains electricity or water. Some homes were simple shanties in the middle of the forest, but it was still their home and now this has been taken from them and they face starting all over again. For many retired people, this is with no savings, no insurance and only a small income from a pension.

Among these community members some farmers were holding on to a remaining few cattle, and hand-feeding them. They are destitute and broken, not only impacted by drought, but now the fires have threatened to take what little they have left – destroying fences, burning sheds filled with machinery, and taking crops carefully nurtured through the drought. 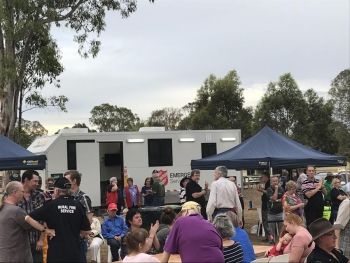 The Salvation Army Emergency Services is well known in Queensland.

We spoke to one lady who said she said her husband had lost a third of their olive trees along with farming equipment stored in shipping containers and sheds. A pineapple farmer in Yeppoon had lost most of his equipment when three sheds were destroyed.

Providing hope to these community members was way more than offering financial assistance; it was being able to sit with them and let them be heard, to let them express their hurt, frustration and sadness, to reminisce and to laugh, to hug and to hold a hand, and to simply say nothing at all. It was talking about the struggles of the past and how those struggles have made them stronger, and how coming through those past struggles are stepping stones to get through this one.

We have on our mobile office the words, “Our teams bringing hope where hope is needed most.” One farmer told me he smiled when he saw that sign, the Red Shield and the word ‘hope’ because he knew he was going to be okay.

We asked some of the community members that we sat with who had lost their homes if they would like us to follow them up in a few weeks as we were here for the long haul and that this first encounter with The Salvation Army was not the last. They were very receptive, and we knew the time we spent with them had mattered.

We believe this form of mobile recovery has allowed communities small and large to be able to access assistance, in their community. It has a sense of allowing us into their ‘space’ where we can see the impacts, and experience the heartache. We usually sit in a hall and wait for people to come to us and we support them in a sometimes overwhelming environment. Being mobilised into the community we believe, is validating for them that they matter. 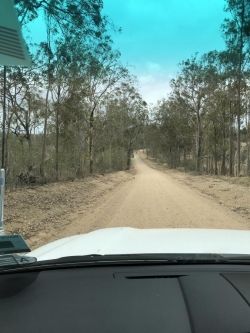 The Stevens’ have covered more than 5000km, with more to come!

Through the Department of Communities, Disability Services and Seniors, a whole new way of providing recovery assistance to communities has opened up. It has given flexibility and opportunity to meet the needs of the sometimes forgotten communities and enabled The Salvation Army to partner with them on a whole new level.

This has given me a whole new understanding of drought-affected communities – the devastation and the heartbreak – as people saw and heard their world go up in smoke.

But what has humbled me is that when disaster strikes, these small communities pull together and support and encourage each other. The neighbour now becomes more like family and they join together on the road to recovery.

Out of such destruction comes unity, and hope flourishes. The journey will be a long one but they know they are not alone! The Salvation Army is journeying alongside as well “bringing hope where hope is needed most”.

I think that The Salvation Army Disaster Management has become the ‘new story’, the story that you hear on the street and in the pubs – “The Salvos were there for me, when disaster struck” – just like we still hear, “I remember the Salvos were right there on the battlefield serving cups of tea and a bikky”.

Future generations will hear this ‘new story’ as well.

It is truly a privilege to be able to sit with these people, to just sit and just ‘be’.

A place of safety

Lincoln shares his reflections below:

I was impacted by the way every community’s members would say the same thing. It didn’t matter if we were in Yeppoon, Boonah, Jimna, Millmerran, Rosevale or Rathdowney, they all said, “We just get in and help each other, we’re all going through it.”

This was also said by people who had not been affected by the fires in any way but felt that if their neighbour was suffering, they were going through the pain with them. It certainly brings people together and new friendships are made. 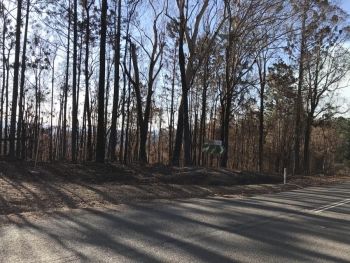 Burned out land is a common sight in many communities.

Something else that impacted me was how many people said we needed to take note and seek the advice of the Indigenous people and their traditional fire management for the land, and I entirely agree with them. I heard so many people say, “If only we were allowed to backburn around our properties.”

One young couple that I spoke with and assisted in Millmerran, shared that they had lost all their building materials including a new toilet and vanity they were going to put in a new bathroom they were building in their little cottage.

For years they have been using an outside toilet and had recently saved up enough to do the addition. They said they were so excited about getting this toilet and vanity actually in their cottage, but now it was all gone including the remainder of timber needed to finish building the room. She was actually crying while she was telling me. It may seem a small thing to us but it was a huge loss for them.

I find it an absolute honour to sit with people who have been through a disaster and listen to them share their stories. You can literally see people, as they come and sit in the mobile office, go, “Aahhh, I feel safe here and I know that someone cares.”