You are here: Home › Features › That Faraway Feeling Karratha, in the Pilbara Region of Western Australia, can lay claim to being one of the most remote Salvation Army corps in the world.

It’s easily the most isolated in Australia, and you’d be hard-pressed to find another corps, with perhaps the exception of Nuuk in Greenland and one or two centres in remote parts of Canada, that has such a long journey to its nearest Salvation Army neighbour*.

Geraldton, which lies 1100km to the south, is the nearest corps to Karratha. Perth, the capital of Western Australia, is a further 400km away. Head east from Karratha and you have to travel 2300km, through a lot of rugged terrain, to Katherine, in the Northern Territory, to find another Salvation Army corps. Head west and there’s more than 7000km of the Indian Ocean to navigate before you reach the island of Madagascar. Due north lies Indonesia, some 1400km away. 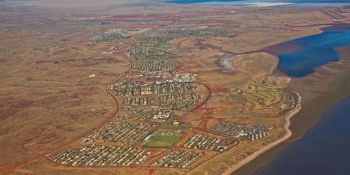 The corps officers at Karratha are Captains David and Lynn Boughton. They moved to the town in January last year, from their previous appointment at Portland in south-west Victoria. They see their isolation as part of where God has called them to be, although still acknowledging some of the challenges it can bring.

“We’ve come from one end of the country to the other,” laughs Lynn. “All our appointments have been in small country towns, so I think God has been preparing us along the way!” David also sees the lighter side of their isolated existence. “It’s so much more remote than anywhere we’ve been, but it’s the first place where we’ve had a Kmart, an indoor shopping centre and five-storey buildings!”

The Boughtons, though, take their appointment to Karratha seriously. “When we are sent to a town, a city or a corps, we see ourselves as being sent to a place to live with, love and serve the community, wherever we are,” says Lynn. “God gives us that choice. I have chosen to follow God and that helps me to be here and do what he has called me to do. We see Christ’s work in all we are doing, not just in the corps. Not every day is great, but that’s okay. We continue to seek his presence and his will every morning.”

Despite their physcial isolation from other corps, centres and divisional headquarters, technology helps keep the Boughtons connected to the fellow Salvationists. But even that still can’t mask the unique challenges that they face. 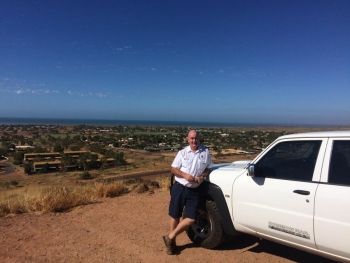 “While living remote has a certain appeal to me and I don’t necessarily feel isolated, there are things we do miss out on,” says David. “We can’t be part of cluster groups, can’t always attend special events, and support is further away. Isolation, though, can often mean it’s just harder, and takes longer, to get to certain places. We’re used to driving long distances to get to places. And getting on a plane is like catching the bus – just a whole lot more expensive! Over time it could be really challenging but for now, we’re loving it.”

For Lynn, it’s the absence of face-to-face contact that she misses. “We know the events that are happening, the outcome of meetings, the support groups that take place or even just the occasional lunch, but we can’t often be a part of them,” she says. “Sometimes, this can have an impact. But, as [National Commander] Commissioner Floyd Tidd said in a recent Australia One letter thanking officers and acknowledging the struggles we can face, God will find us wherever we are, and it’s our responsibility to search for him.”

Karratha, and the adjoining port of Dampier, has a population of around 22,000. It is predominantly a mining town, with a large fly-in-fly-out population, although that is gradually changing. More families are moving in, there are less single men, and the number of flights in and out of the town is declining. Most of the population, though, is there for transient work. Only a small percentage have lived in Karratha for more than 10 years.

The Karratha Corps is small in number but active in the community. There is a thrift shop next to the corps building, and Doorways, which provides food, material aid, information and referrals, is also run from the corps. There’s also a youth refuge that offers crisis accommodation for young people aged 15-25. The have their own rooms, share bathrooms, cook together and eat meals in the communal dining area. “We are trying to create a family atmosphere there,” explains David. “Lynn and I are the unofficial chaplains to the young people.” 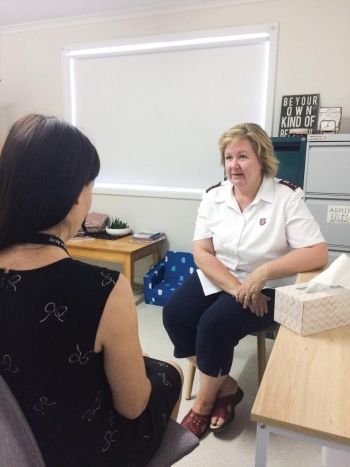 The women’s refuge, where Lynn (pictured right) works as assistant manager four days a week, is the only such facility in Karratha. It provides support to women and their children who are escaping domestic violence, through the provision of emergency accommodation, outreach work, and case management and support.

Lynn also works two days a week alongside David as Karratha Corps Officer. Mainly Music has been running at the corps for many years and now has 40 families registered. About 15 of these families attend each week. “It’s doing so well here because isolation is a driving force and many of the mums who come are in Karratha because of their husband’s work and need to find ways to interact with other others,” explains David. “So the mums and the children all benefit.”

There is also a large Indigenous community in Karratha with elders from other major centres, such as Broome and Carnarvon, often coming to the town. The Boughtons occasionally travel out to remote Indigenous settlements, taking essential supplies to those living there.

David is also chaplain to the Fire and Emergency Services of the town – a role which comes with that of Karratha Corps Officer – and both David and Lynn are active in the town’s Ministers’ Association, participating in joint activities particularly at Easter and Christmas time. The Salvation Army is well known and supported in the town. Other churches, such as the Baptist Church in both Karratha and Port Hedland (240km north), often assist the Army with donations of food. “This is extremely helpful,” says David. “We can stretch our finances a lot further that way. Our isolation creates opportunities for us to work together, which is often harder in bigger cities.”

In the remote region of north-west Australia, life is often done on a very big scale. Recently, a company donated six shipping containers to The Salvation Army, complete with bar fridges, mattresses and bedside tables, when workers were moved elsewhere.

“To be here, you have to know why you’re here,” says David. “It’s a big move to come here and you can sometimes feel like you’re on your own. Unless your faith is strong, it’s hard. And people with strong faith can sometimes struggle too. We definitely know, though, that we’re in the right spot.”

*The Salvation Army has a presence on the remote island of St Helena in the Atlantic Ocean but it is not considered a corps.