You are here: Home › Features › The Gender Equity Plan When the structural foundations for a new Australia Territory were unveiled on 1 May, an eye-catching component was the inclusion of a gender equity strategy.

Developed out of a series of workshops, the Gender Equity Plan was presented to The Salvation Army’s International Management Council in London, by Commissioner Tracey Tidd.

The Gender Equity Plan seeks to “address the systematic gender inequality including that faced by women officers” through the appointment of a National Gender Equity Advocate, and a Women’s Equity committee.

The focus of the work to be undertaken will see the implementation of the Army’s biblical teaching about women’s leadership, ensuring that the new Australia Territory structure genuinely values the “the unique gifts of each individual”.

The journey to this groundbreaking plan began with many women who share Commissioner Tidd’s own experience of “ default appointments” – those given to married women officers as their husband moves into senior leadership in The Salvation Army.

Now, the Australia One strategy positions our country and Commissioner Tidd at the forefront of the gender equity issue.

Read an example of how the subtleties of gender inequity were recently challenged in The Salvation Army.

Commissioner Tidd spoke with Others about this pioneering gender equity initiative. 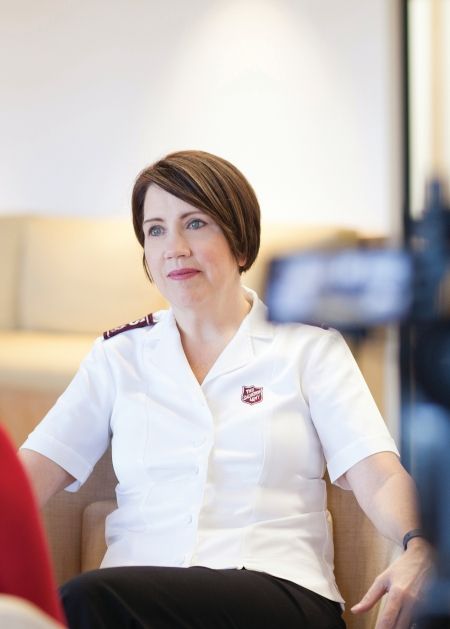 Anne: Why is gender equity important to you personally?

Commissioner Tidd: I think for me, personally, and on behalf my colleague officers and women in general, the Australia One space has really given the opportunity to bring this issue to the forefront.

I want to see every individual developed to their fullest potential and provided avenues of service to maximise the mission. We haven’t always been good at this – we can do better and now is a time to do that.

I think it provides a window to ensure equal opportunity regardless of sex, and to develop people’s skills and invest in building capacity for leadership and service regardless of gender.

How did the Gender Equity Plan come about?

As we gathered, and the facilitated conversation unfolded, it became clear there was a much larger issue at stake: the underutilisation of many women in ministry, especially women officers.

What positions come with default appointments in Australia?

What has been achieved in regard to default appointments in Australia One already?

During the recent presentation to International Headquarters (IHQ ) of the Gender Equity proposal within the Australia One Program, there was an acknowledgement of the opportunity to be seized at this time.

It was agreed that IHQ would be open to the proposal of specific appointments for both members of a married couple being appointed to divisional leadership roles. This provides opportunity to consider the gifts, experiences, skills and passions for both individuals and the needs of the movement in proposing appointments.

It should be noted and celebrated that the Australia territories (Eastern and Southern) over recent years have been making significant advances in this area including appointments that were not the “normal” appointments for married women in senior leadership roles.

This includes married women serving as divisional commanders and as training principals. We want to continue to build upon these proven successes.

How do you believe that a move away from default appointments will help advance the mission of The Salvation Army in Australia?

There are two ways that the mission will advance as we move away from default appointments.

Firstly, let me state clearly that the role of women’s ministry in The Salvation Army is an important one. Women’s ministry has throughout the years been an effective avenue of connecting with women and sharing the love of Jesus.

I continue to see opportunities to share life and journey with women whose lives are being transformed. There is no desire to diminish the emphasis upon women’s ministries.

Secondly, I believe that the move away from “default appointments” advances the mission by releasing individuals to make the greatest impact they can according to their skills and gifts and the needs of the movement. Colonel Julie Campbell has been appointed to the role of National Gender Equity Advocate, effective August 1, 2017.

How is appointing an National Gender Equity Advocate going to keep this on the Australia One agenda?

The advocate will directly report to the Chief Secretary. As a member of the Senior Leadership Team and Cabinet, the National Gender Equity Advocate will keep the matter across leadership considerations so that the matter remains on the radar.

As this has now become a key component of the Australia One Program we are all responsible at every level to consider gender equity and work together to achieve gender equity.

A key component of the agenda includes the development of a strategy focus upon upskilling and development opportunities for women so that they can be equally considered for appointments based on merit.

Part of the advocate’s role will be to identify 20 women each year from across the nation to ensure we are beginning that process of upskilling.

An important part of the advocate’s role is to implement strategies to deal with systemic problems of gender equity. They will be responsible for making sure that the recommendations are implemented: like having a minimum of 30 per cent women on every committee and board.

It will also be the responsibility of the National Gender Equity Advocate working with the committee to identify what the current issues are and make recommendations on how to move forward.

Speaking of the 30 per cent minimum, some would say this is just tokenism. How would you respond to that perspective?

We should recognise that there are women in leadership across Australia who are making a significant impact upon the mission and the movement.

There are also women making a great contribution on many of our boards and councils. This recommendation keeps us accountable to that consistent minimum.

By choosing a 30 per cent minimum there is not a limit to that level but it ensures that minimum is maintained while aiming for an even balance, but prevents appointing either a male or female to a board or leadership to just to make an even balance.

The committee is going to be made up of both men and women and some will not be Salvationists. Why is this diversity important?

There are others in many organisations, including government, business and not-for-profits that are on this journey toward gender equity. We can benefit from their experience and expertise.

People external to The Salvation Army bring a freshness to this conversation and a new set of eyes. It will be challenging for us to work with external partners because I think they will hold us to the highest level of integrity. I think we need to be challenged to be our best.

What is the role of men in this strategy?

There are men who are passionate about this issue. We will be including men as part of the gender equity committee. Including them gives us a broader perspective, including those who are external to The Salvation Army.

When will we start seeing changes?

We are now having the conversations with officers being considered for divisional leadership roles to assist in the development of the proposals for presentation to IHQ that reflect each officer’s gifts and skills and maximises the impact on mission.

In the appointment of boards, senior leadership teams and cabinet for the new Australia Territory, we will be guided by developing principles for gender equity.

With the appointment of the National Gender Equity Advocate starting on 1 August, the development of the committee will commence and be formed before the year's end.