You are here: Home › Features › The Great Earth House World Environment Day 2019 will urge governments, industry, communities and individuals to come together to explore renewable energy and green technologies, and improve air quality in cities and regions across the world.

On 29 August 2016, a group of eminent geologists attending the 35th International Geological Congress in Cape Town, South Africa, announced that the earth had entered a new age or epoch of its life. They named it Anthropocene, meaning ‘the age of humans’.

The word was not new, having been popularised by Noble Prize-winning atmospheric chemist Paul J. Crutzen in the year 2000. His rationale for the new epoch had gained increasing support among earth scientists in the intervening years.

Crutzen’s claim was that the impact of human activity on the earth, particularly oceans and the biosphere, was so profound that it had ushered in a new geologic epoch.

This Age of Humans is still not ‘official’, but the widely-recognised Anthropocene Working Group (AWG) has spent the past nine years working on the ratification process and the International Union of Geological Sciences will vote on the Epoch once the AWG’s work is complete and its formal proposal has been received.

I find the thought intriguing – and somewhat frightening – that in 2016 while most of us were simply minding our own business, the earth slipped into a new age of its lifespan without even a blip on the radar of our personal and corporate lives. 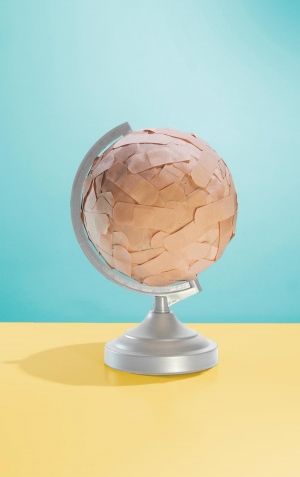 In the not-too-distant future, the dawning of the Anthropocene will become a portal in time in which unprecedented changes will be required of humanity, both in how we understand our role in the universe and how we modify – or fail to modify – our behaviour and activity according to this new level of awareness.

I use the word ‘new’ lightly here. In reality, the major religions of the world all present the earth in some way as ‘the great earth house’ and the role of human beings as managers or stewards of the house.

In the New Testament, the word oikoumene means life in a great ‘world house’. And in the Old Testament, Genesis chapter one clearly describes the God-ordained role of humans as stewards of the earth.

The onset of the Anthropocene has been marked by first a gradual and then a sharp decline in humanity acting responsibly for the wellbeing of the great earth house. There is divided opinion on when the decline began, pointing to different possibilities.

Some say it was the start of the Industrial Revolution, 200 years ago. Others go back further. But many earth scientists pinpoint 16 July 1945 as the start of the new epoch – the date of the first detonation of a nuclear device in the New Mexico desert.

Plutonium fallout has left a mark in sediments worldwide, carried by winds; rivers, lakes and oceans; and glaciers. Similarly, our large-scale, long-term burning of the three fossil fuels – coal, oil and natural gas – has created a toxic blanket around the earth that traps the sun’s heat in the atmosphere, making temperatures increase, climates change, glaciers melt and ocean levels rise.

Not only that, but air pollution is bad for human health and it is a well-known fact that our rivers and oceans are acidifying. Add the impact of mass deforestation on rainfall patterns, and humanity has a self-made dilemma of monumental proportions on its hands. All of this, apparently, the result of ‘progress’, but more candidly to feed a lifestyle and unabashed wealth accumulation that has served to separate humanity from its great earth house rather than nurture oneness with it.

We have been far from the landlords we should have been. Of course, that’s easy to say in hindsight and armed with the knowledge of renewable energy technologies such as wind, solar and geothermal power.

But there is an onus on humanity now across all sectors of our shared life together – global and local – to own our poor stewardship record and join hands in an attempt to reverse the impact of our recent environmental footprint; or at least salvage what we still have, given the warning of geologists that the earth’s natural environmental balance may be irretrievable or take millennia to restore.

That might sound dramatic, but the truth is that many people today have a sense of foreboding about humanity’s future. Grief and regret over the state of the earth is a part of what fuels this feeling. Humanity is deeply unsettled.

Millennials and Gen Zers, particularly, wonder if we have entered humanity’s end game and our time on earth is almost up. A new level of planetary stewardship is an enormous challenge and one that is meant as much for adherents of Christianity as it is for those of other faiths and the world at large.

The biggest questions facing Christians now are about how we live out our faith and how we go about our mission amid the Anthropocene. It is a new day for both the world and the Church, a time in which we must identify how we can redeem the earth and its environment before it’s too late.

A new paradigm for our lives requires a paradigm shift in our priorities, in our behaviours, and in how we see ourselves. Exactly what should the Church in the Anthropocene look like? I want to present what could be an Anthropocene blueprint for the Church.

The overarching or empowering idea for this mega-shift in both ‘understanding’ and ‘being’ will be stewardship. In the blueprint, the biblical concept of stewardship that we may have regarded as a principle to live by or a goal to achieve, will actually fuel a new experience of being Christian. We actually live stewardship and by so doing become the blueprint. We are the dust of the earth and have the breath of God in us like everyone else. But Jesus called us the ‘salt of the earth’ and the ‘light of the world’.

In our earthiness then, let us be salt and let us be light, rather than be disconnected because the focus of our faith is heavenward. Let us understand that in the Anthropocene these roles of salt and light will translate first into the care of the earth, the stewardship of its resources, and remedial action in addressing environmental decline.

In other words, this will be a way of life for us that reflects strongly in our actions, our words, our mission and our policies. In fact, such a universal commitment could become part of a preamble to all policy statements at every level of the life of the Church – not unlike the way that our recognition of ‘first peoples’ has become standard preamble commentary in some churches in some parts of the world.

In the Anthropocene, the Church will lose credibility if it is not seen to be at the forefront of planetary stewardship and sustainability in its actions and advocacy. Such will be the expectation of a world fearful of environmental calamity.

It is not by chance that an incarnational model of being church has risen from relative obscurity during the past two decades to dominate discussion about mission and ministry methodology.

One of the strongest and most recognised metaphors in the Bible describes us as “the Body of Christ”: “Now you are the body of Christ, and each one of you is a part of it,” the Apostle Paul writes to the Christians at Corinth (1 Corinthians 12:27).

If we are the Body of Christ, then we are the healing hands of Christ extending out to the ends of the earth, the face of Christ radiating the love of God for our world, and the voice of Christ speaking the mind of God into the world’s present and future realities.

In the Anthropocene we cannot be anything but incarnational. Not only do we represent Christ, we are his hands, feet and spokespeople – his body! Our values of integrity and compassion, respect, diversity and collaboration will take on enhanced meaning as we engage the world with the priority of stopping environmental decline.

3. the church is mission – we are equity and justice, mercy and transformation (micah 6:8)

We are equity. We are justice. We are mercy. We are transformation. We live and breathe mission. In the Anthropocene, mission will no longer be something we do, it will be who we are.

I want to encourage Salvationists here to see that perhaps more than any other church grouping today, we are perfectly poised to make this paradigm shift in our understanding and, therefore, our impact on and in the world.

Can we accept the identity that somehow, in the mysterious economy of God, has been cast for The Salvation Army today in the mind of the world?

I’m talking about the world’s deeper perceptions of us over a long period of time as the hands, the face and the voice of Christ who loves the world he has made and all the people in it.

I’m saying that how the world sees us needs to translate into how we see ourselves and become the new spring in the step of The Salvation Army in every place.

In my view, we do not do mission, we are mission, a foundation from which we must operate with deep humility.

In every place, internationally and locally, we must identify, advocate for, work alongside and restore those most impacted by environmental degradation and climate change, particularly those unable to fight against its effects and with little access to resources.

Such effects can be poor food, water and shelter security; destroyed livelihoods; and increasing instability from prolonged natural disasters such as drought. In Australia, this is particularly noticeable in our rural areas, but the environmental impact of urbanisation on our people must also be addressed.

At the heart of these three statements is the idea that we no longer see ourselves as separate from but as one with the context for our mission, with our mission itself and with the one who has redeemed us and brought us into union with him.

In the Anthropocene, the future of the Church, including The Salvation Army, will be at risk if we don’t metamorphosise in the way we see ourselves and therefore the way we think and act and speak; imbibing environmental stewardship, passion and partnership as a way of life, of being and of leadership.

World Environment Day is a United Nations global event, which takes place on 5 June every year and is celebrated by thousands of communities worldwide.

Since it began in 1972, it has grown to become the single largest celebration of the environment each year. The UN has announced that China will host World Environment Day celebrations this year, with a theme of air pollution.

Approximately seven million people worldwide die prematurely each year from air pollution, with about four million of these deaths occurring in Asia-Pacific.

World Environment Day 2019 will urge governments, industry, communities and individuals to come together to explore renewable energy and green technologies, and improve air quality in cities and regions across the world. Salvos and the environment

The Salvation Army has developed an International Positional Statement on the environment, titled ‘Caring for the Environment’.

It states: “The Salvation Army believes people are made in the image of God and have been entrusted with the care of the earth and everything in it.

“The Salvation Army recognises environmental degradation as one of the most pressing issues facing the world today with its effects felt disproportionately by the most vulnerable communities, particularly in terms of health, livelihood, shelter and the opportunity to make choices.

Major Peter McGuigan is Corps Officer at Preston Corps in Melbourne. He is also the former chair of The Salvation Army Moral and Social Issues Council.