You are here: Home › Features › The Song Keepers Singing The Lords Song In A New Land

The Song Keepers: Singing the Lord's song in a new land 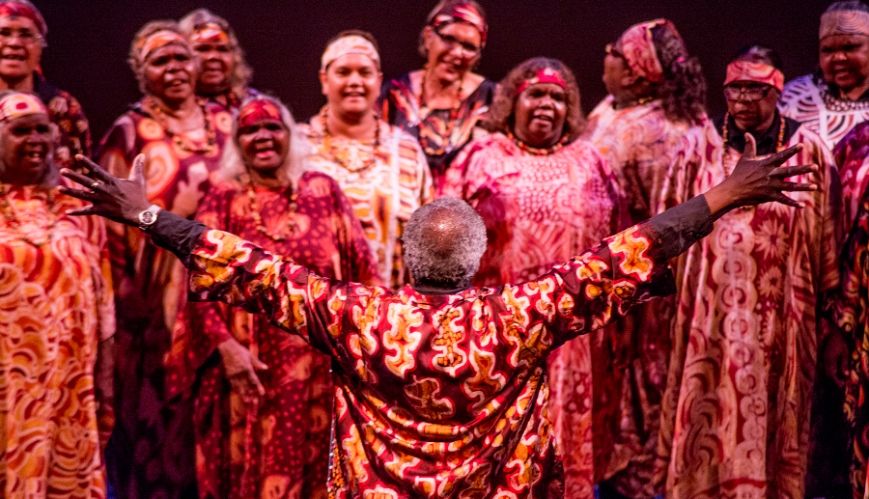 The Song Keepers: Singing the Lord's song in a new land

The Song Keepers tells the inspiring story of an Aboriginal women’s choir and their first tour of Germany.

Most of us who live in Australian coastal cities are immigrants, and the connection between the original owners of this land and the Christian faith may not be familiar to us.

But the recent documentary The Song Keepers, about the formation of the Central Australian Aboriginal Women’s Choir, has shone new light on the way faith, Indigenous languages and traditional music can combine to make a powerful statement. 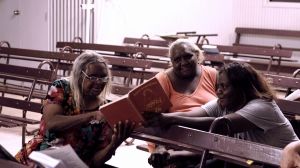 In The Song Keepers, four generations of women (and a couple of blokes) go on a historic journey to Germany to sing the hymns given to their ancestors by German missionaries. But instead of German lyrics, these hymns were translated by the early Lutheran missionaries into local First Nations languages.

Adding to the cultural mix is choirmaster Morris Stuart, a black man born in British Guyana who travelled to England, fell in love with an Australian girl and returned to the land down under with her to raise a family.

Fast forward a few decades and Morris travels to central Australia, bringing together the remnants of First Nations church choirs to form the Central Australian Aboriginal Women’s Choir to sing the old Lutheran hymns in Western Arrente and Pitjantjatjara languages.

“We’re taking them back to Germany, like a boomerang—but this time, encased in these Aboriginal languages,” Morris explains in The Song Keepers.

The Song Keepers story embraces Christian faith and First Nations culture and this is also a feature of The Salvation Army Alice Springs Corps (church), where the majority in church on Sunday are First Nations people. 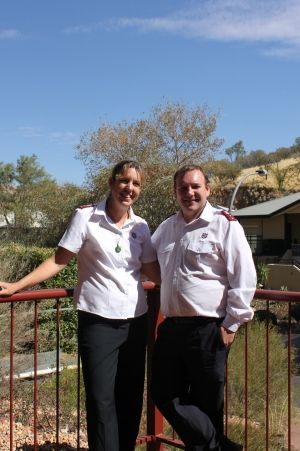 Corps leaders, Captains Nari and Stuart McGifford (pictured right), say they are richly blessed because the majority of the corps are First Nations people, and services include their culture.

“Our collection of Aboriginal language songs is in Western Arrente, Pitjantjatjara, Luritha and Walpiri, and we have up to Indigenous language songs each week,” says Captain Stuart.

Captain Stuart, associate director of social programs, says it is essential for the Salvos to include Indigenous culture in the life of the corps.

Captain Stuart says a placement at Alice Springs 13 years ago changed his life. It was the first time he made First Nations friends and this experience came at a stage when the intellectual rigour of his studies had taken its toll.

“The time spent sitting cross-legged in the red Central Australia dirt, hearing what Jesus meant to some wonderful people who had led an entirely different life from me was healing to my soul,” he recalls.

Now stationed full-time in Alice Springs, he has been able to meet a new generation of First Nations Christians, giving him a chance to embrace their culture.

“I’m blessed by their patience as every now and then they say, ‘Pastor, these people want you to pray with them,’” Captain Stuart reflects.

“I recently attended a funeral conducted entirely in Western Arrente by an Aboriginal pastor. The service was moving and powerful. Using songs in familiar language helps include people. We see people perk up when we do a language song—it is a powerful reminder that this is their church too!” Captain Stuart says. 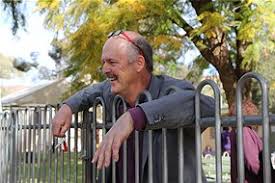 Pastor Rob Borgas (pictured right), a pastoral support worker for Finke River Mission of the Lutheran Church of Australia, would agree, saying that what thrills him most about the Central Australian Women’s Choir performances is the impact they have on so many unchurched people throughout Australia and the world.

“Many in the audience are openly quite critical of the Western church and the missionaries they sent to these people in Central Australia long ago, yet oddly they seem to receive the choir’s Christian hymns and songs quite openly and graciously. God truly works in mysterious ways!”

What The Song Keepers does is challenge the common idea that the Christian missions did more harm than good, an idea that choir member Theresa Nipper disputes. Rejected by the elders of her tribe for being the daughter of a white man, she was taken in and cared for by her pastor’s wife.

“People don’t understand—they just think the missionaries came and took over, brought their God with them, the Bible and all that. They don’t see the other side of the missionaries, who saved a lot of children’s lives,” she says in the film.

Singer Pantjiti McKenzie sums up the successful mixing of First Nations culture and Christian faith, saying that both are important to her and make her stronger.

“On Saturdays I take the young girls out bush. I teach them traditional dance and singing. And later, the choir gets together to sing hymns in the church. I don’t feel like I have to choose between them, they’re both equally important to me. We stand by both,” she explains.

Pastor Rob was the driving force behind the scenes to make the dream of a trip to Germany to sing Lutheran hymns in First Nations languages and harmonies a reality. 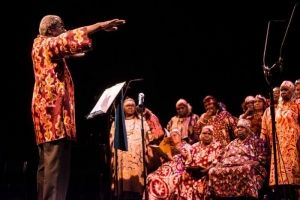 Not only did most of the singers not have passports, many of the older ladies didn’t even have birth certificates, so Pastor Rob had his work cut out for him. It was Pastor Rob who introduced Morris Stuart (pictured right conducting the choir) to the remaining members of several choirs.

“I really wanted to encourage these old choirs to restart because I realised the importance of the choirs for congregational worship. When some of the original leaders of these choirs helped me edit a new Pitjantjatjara hymnal I realised how important the old German Lutheran and Presbyterian hymns were for them,” he says.

Pastor Rob encouraged the choirs to record these songs in multi-part harmony so they wouldn’t be forgotten, and explains that the early missionaries and their wives started most of the famous choirs at places like Hermannsburg in 1877 and Areyonga in the 1940s.

Touring through Germany and performing in distinctive colourful robes, the choir received rapturous receptions from people who recognised the old Lutheran hymns, sung with a new vitality in the First Nations languages.

Pastor Rob says that singing is a demonstration of Christian faith for the choir.

“When these people sing they are openly and unashamedly sharing their faith with thousands of unchurched people. Their faith has sustained them and their families and their communities for many years since the missionaries first brought the good news about Jesus Christ. But they are also proud to share their Indigenous languages and culture as part of the amazing performance they bring,“ he says.

The Central Australian Aboriginal Women’s Choir has also given live performances in the Melbourne Recital Centre and Sydney Opera House, and currently is performing in the huge Serenade! Choral Festival in Washington, in a tribute to Nelson Mandela.