The Tranmere Street refuge has been a “safe haven” for troubled youth over the years.

It will be 40 years next month since The Salvation Army’s Tranmere Street Youth Refuge in Melbourne opened its doors. It was a ministry that was to spawn many of the Army’s social programs, not only in Melbourne but across the nation. Initially staffed by officers and Salvationists, the refuge grew to become what is now the Crossroads network.

Among the many officers and Salvationists to get their first taste of ministry at Tranmere Street are the likes of Graeme McClimont, David Eldridge, Brendan Nottle, Jason Davies-Kildea, and Mal Davies. Many other people who now hold senior roles at other organisations, among them Paul McDonald (CEO Anglicare), Marg Hamley (Director, Berry Street), Keith Waters (Director, Youth Development Australia), and Steve Barrington (CEO Foothills Community Care) (pictured standing below with a resident), also spent time on staff at Tranmere Street.

Towards the end of 1986 – the year the “new” Tranmere Street Youth Refuge opened – I was completing university and looking to have a year off study before returning to do a Diploma of Education so that I could teach English. I spoke to a fellow soldier from Northcote Corps, Envoy David Eldridge, and asked if he had any part-time jobs going for me at the Crossroads Youth Network, of which he was the director.

Dave said that he had a full-time job as a youth worker going at something called Tranmere Street Youth Refuge. He suggested I have a go at that and, if it didn’t work out, he would nd something else for me. So, in mid-January 1987, with neither qualications nor experience, I began as a youth worker. I had reminded Dave of my total lack of knowledge of how to do this job, but he said that he knew me and my personality and he thought I’d be fine. 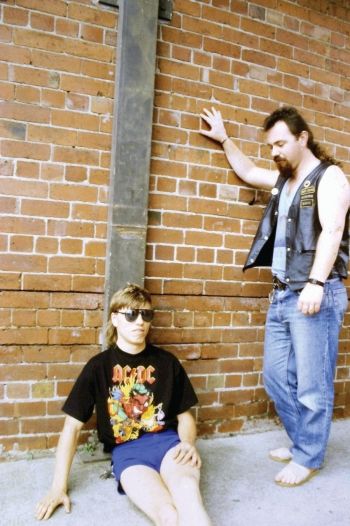 For the first few weeks I was lost and seemed to be getting paid for doing nothing. I played cards with the residents of the refuge; I played basketball; I played football; I played table tennis; I went to the beach; I shared meals; I watched TV with them.

I said to Dave at one stage: “Is this being a youth worker? I feel like a fraud.” He replied, with wisdom gained from experience: “Give it time. They’re just getting to know you. Stick with it.”

Well, I stuck and within another week or so they started to open up to me! While playing cards, one boy would tell me of his troubled upbringing and his hopes to find work and save some money.

Between games of table tennis, another boy spoke of his need to talk to a counsellor about some childhood experiences. Over a meal, one boy spoke of his yearning to maintain a relationship with a girl and he rattled oa list of girls who had “dumped” him in the previous few years.

Suddenly, I felt like a youth worker. While I could offer practical advice and “wisdom” to some queries, I also recognised my limitations and knew how to arrange for residents to see a counsellor, to seek work, to start a training course, to meet with a chaplain, to sign up with a local footy club and so on.

I worked at Tranmere Street for three years before moving to another role in Crossroads. They were three challenging years – almost every day included dealing with some sort of confronting behaviour – but also three rewarding years as I saw teens mature, move on and even thrive.

From my seat now, as a corps officer, I look back at those days at Tranmere Street and see ministry. I see a young Salvationist spending time with troubled youth and establishing relationships of trust. I see how God used me to help youth who were lost relationally, emotionally and spiritually, and how God grew my faith exponentially as I relied on him each day.

About a decade ago, I was walking through a shopping centre when I heard someone call my name. I turned and saw a lady of about 30 with a toddler. I didn’t recognise her but she was approaching me with a smile and she repeated my name.
I confessed that I was Mal Davies but couldn’t place her. 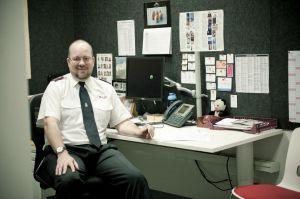 Her name was Gillian. She had stayed at the refuge when I was on staff. She was now married, had two children and worked as a hairdresser. We chatted about some people who she’d shared the refuge with and she thanked me for what I and The Salvation Army did in caring for her.

I said: “We put up with you because we could see the potential in you. Someone had to stick by you; if not the Salvos: who?”

She again thanked me for being part of the team that saw her get through some difficult years and she said she always supports the Salvos and the Red Shield appeal when she can. She said, “God bless you”, and departed with a smile.

I didn’t feel like a fraud anymore. What I did – what we did as an Army – had changed a life for the better.

Now multiply that by thousands of lives over the decades. Tranmere Street is a place where lives are changed. Pick your quote: “Christianity with its sleeves rolled up”; “Heart to God, hand to man”; “Serving suffering humanity”; “Love in action”. They all apply.

Read the reflections of David Eldridge, a retired officer now living in Geelong.

MORE THAN A ROOF OVER THEIR HEADS

On 1 May 1978, The Salvation Army opened its Homeless Youth Program in a dilapidated rented house in Moor St, Fitzroy, in Melbourne’s inner north (pictured right). On the first night, six young people were accommodated. Two nights later, 17 homeless young people were in residence, sleeping on mattresses on the floor.

The Homeless Youth Program was a response by a group of young Salvationists who, perceiving a rapid increase in the number of homeless young people resident at The Gill Memorial Home (night shelter for older homeless men), set out to do something about their plight. Facing the threat of eviction from these sordid premises, The Salvation Army purchased No.12 Tranmere St, an old four-bedroom house with limited facilities but close to the day centre for homeless youth in the old North Fitzroy Salvation Army hall.

The building, while in many ways inadequate and constantly under threat of closure, continued to provide accommodation for well over 1000 homeless young people during the next seven years. It was later demolished and, in May 1985, a new building was constructed in its place (pictured right). It was officially opened by then-Territorial Commander, Commissioner Eva Burrows, the following year.

Tranmere Street was the first large youth refuge established in the state of Victoria. It had a significant part to play in the establishment of a network of youth refuges throughout the state and is still an integral part of the Crossroads program. It provides a housing service for the homeless youth, which not only meets their physical needs but offers warmth, acceptance and security.