Should it be written here that Harold Scotney turned 100 years of age on 1 March 2021 and quite a few people would exclaim: What, who?

But change the name to Bill Scotney and the penny would drop.

Bill may also be a little confused. Even though his full name is Harold Godfrey Scotney [after his father, renowned Army composer Harold Scotney], he has always been known as Bill. That’s because the day he was brought home from the hospital as a baby of a few days old, his father welcomed him with the words, “G’day, Bill.”

As Bill’s eldest daughter Robyn says: “... and the rest, they say, is history”. “It stuck and he has been called Bill to this day.”

The Scotney name is synonymous in Salvation Army circles. Mention the march ‘The Wellingtonian’ and most bandsmen worth their salt would nod knowingly and begin to hum the first few bars. Robyn said that few people would know that Harold wrote that march in honour of his son who was born in Wellington, New Zealand.

Robyn, a retired Army captain, said marches were written to celebrate the birth of each of Harold and Clara Scotney’s three children: ‘The Wellingtonian’ for Bill, ‘Feilding’ for daughter Thelma [Commissioner Thelma Saunders] and then ‘Dannevirke’ for Elva [Dopson]. 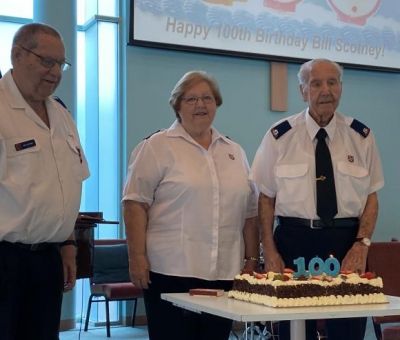 Bill Scotney with his children Ron and Robyn with a cake presented by the corps folk at Gold Coast Temple to celebrate his 100th birthday.

Bill said his father had a significant influence on him, having instilled in him the love of music, particularly brass band music: “Dad was a strict disciplinarian both at home and as a bandmaster. He made me practise the piano and later my instrument. Music came naturally to me and I only had one term of piano lessons.”

In 1934, when Bill was 13, the family moved to Australia and became soldiers of Sydney Congress Hall Corps where his father was commissioned as bandmaster. Bill played cornet in the young people’s band until 1939 before joining the senior band.

He enlisted with the Australian Defence Force in 1941 – serving with the 18th battalion in World War Two. He did not serve overseas but stayed around Sydney. His military service didn’t stop his involvement with brass bands. He joined fellow Salvationists, including another prominent Army musician, Max Percy, in the Eastern Command Band – the resident band at Victoria Barracks, in Sydney. Bill also married in the war years, taking Gladys as his wife in 1942.

The couple did return to Sydney briefly to care for Gladys’ ill mother, but then Gladys passed away in 2001 aged 80.

Bill continues to live independently on the Gold Coast – doing his own grocery shopping and looking after himself. “He still drives himself,” Robyn said. “He goes out most days – although not long distances.”

Hearing loss eventually forced Bill out of active banding but, as a band reservist, he has helped out on the double Eb bass and euphonium when required.

Robyn said her father was a corps organist for many years and continues to play the piano. He accompanied soloist Amanda Hutton at his celebration service. “He said it was his swansong.”

Outside the Army, Bill was a bicycle mechanic early on in his work life, having built Malvern Star bicycles for Sir Bruce Small, and later as a “commercial traveller” selling men’s clothing items for Fitwear, a company run by a Salvationist, before moving into the office as the warehouse manager.

The family celebrated Bill’s 100th birthday on 6 March but, due to COVID-19 regulations limiting the number of people they could invite, the corps marked the milestone with a special segment during its worship service on 7 March. Bill’s son Ron and his wife, Glenda, were able to join in this service.

Added to the family and church celebrations, Bill received a letter from the Queen, the Governor-General, the Prime Minister, the Queensland Governor and Premier, the local MP and the Gold Coast Mayor. He was presented a certificate by the RSL and the Minister for Veterans Affairs did a Facebook article about him.

Bill said he had seen many changes in his beloved Army over his 100 years but laments the demise of bands and songster brigades. “I was put on the cradle roll at Wellington City Corps and have been a soldier ever since,” Bill said. “I have served under 20 of the 21 Generals.

“I love listening to The Salvation Army songs on YouTube. We have so many lovely songs in the songbook and don’t seem to use them anymore.

“The world has changed greatly since I was born. We now have cars, planes and technology. Church attendance is lower. Whilst I agree change must happen, it needs to be a change for the better.”

Five generations of Bill’s family regularly worship together in the Gold Coast Temple congregation. Representatives of those five generations were at the service.

Robyn describes her father as “extremely kind and generous; an encourager” who “gets alongside” the young people in the corps, especially young bandspeople.