After living in Melbourne, in 1966, Barbara joined her parents who were stationed in Western Australia, and there she met Bryce Mouchemore. They were married a year later, and in 1969 they entered Officer Training College as members of the Undaunted session. Their first child Fleur was born while they were still in college. 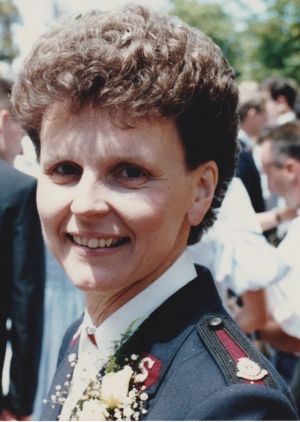 After being commissioned, their first three corps appointments were in South Australia – Port Augusta/Quorn Corps, followed by Port Lincoln, where their second child, Rebecca, was born, and then to Colonel Light Gardens, where their third child, Simon, was born.

Corps appointments to Kalgoorlie (WA), Bunbury (WA) and then Bendigo (Vic.) were undertaken. In 1982, they were appointed to the Public Relations Department, followed by appointments as Divisional Youth Secretary/Divisional Guard Organiser in the Melbourne Central Division and then to the staff at the Officer Training College.

In 1992, Barbara was appointed to the Pastoral Care Centre, where she commenced and gained tertiary qualifications in counselling psychology. Her last appointment before retirement in 2009 was in chaplaincy in the Melbourne Central Division.

Barbara was a warm, accepting, and gifted person, particularly as a counsellor and teacher in spirituality, Bible/theology, and psychology.

She had a deep insight and experience of the spiritual life from a young age, which she nurtured all her life. She loved to acquire knowledge that would develop her in her walk with God and, in turn, to assist others with their journey.

Our love, sympathy, and prayers are with her family. Husband Bryce, Fleur and Darren, Rebecca and Andrew, Simon and Tamara and grandchildren Isobel, Amelie, Lachlan, Max and Sebastian. As well as to the extended family and friends.

Blessed Lord, to see Thee truly,
Then to tell as I have seen,
This shall rule my life supremely,
This shall be the sacred gleam.
Sealed again is all the sealing, Pledged again my willing heart,
First to know Thee, then to serve Thee, Then to see thee as thou art. (Albert Osborne)

A Thanksgiving Service for the life of Barbara will be held on Thursday 23 December 2021, from 10am at Bunurong Memorial Park - Cumulus Chapel 790 Frankston - Dandenong Road, Dandenong South. Lieut-Colonel Frank Daniels will conduct the service.