Major Berynice Ford was promoted to glory Saturday 30 April 2022, aged 94. Berynice entered her heavenly reward after faithfully serving as an officer for more than 67 years.

Berynice Packer was born on 8 February 1928. A lifetime Salvationist, she was raised on a Blackbutt farm, leaving school at 13 to help her father plough while men went to war.

Moving to Brisbane in 1948, she married Alf at Coorparoo Corps in 1949. A few years later they sold their home and, leaving their infant son, Lester, behind in Brisbane, moved to Sydney to attend Officer Training College. They were commissioned as Salvation Army officers on 10 January 1955, as part of the Shepherds session. 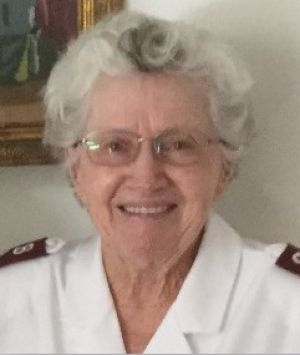 After appointments in Maclean and Windsor, they sailed to Brazil in 1957 with Lester and baby Delece. They returned 10 years later due to Berynice’s ill-health. They served in social work and at THQ, but Berynice’s greatest love was working with people in Rio Comprido (a slum corps in Rio de Janeiro), Bosque (a city corps in São Paulo), and the Méier Boys’ Home (also in Rio), all in Portuguese.

Back in Australia, and following leadership roles at Cessnock and Mitchelton corps, and in social work, DHQ and THQ, they moved to Papua New Guinea in 1982 as second-in-command, returning home in 1984, again due to Berynice’s ill-health.

In 1987, they returned to Brazil to introduce Planned Giving to the territory, also acting as Divisional Commanders. Alf’s triple bypass surgery forced them back to Australia in 1989 and they officially retired in 1990. They then worked on Deferred Giving for the next four years.

In retirement, they soldiered at Carindale [formerly Coorparoo], the corps where they had started their life journey together. Berynice later became president of the local branch of Probus.

Berynice is survived by Alf, her husband of 72 years, her daughter Delece, her son Lester, and his sons Clinton, Stuart and Kristan, and their families. Our love and prayers along with our heartfelt sympathy covers and surrounds them at this time.

These were the last scriptures that were read to Berynice by her family in Portuguese:

Confia no Senhor de todo o teu coração, e não te estribes no teu próprio entendimento. Reconhece-o em todos of teus caminhos, e êle endireitará a tuas veredas. (Provérbios 3:5-6)
Trust in the Lord with all your heart and lean not on your own understanding; in all your ways submit to him, and he will make your paths straight. (Proverbs 3:5-6)

E eis que estou convosco todos os dias até a consumação do século. (Mateus 28: 20)
And teaching them to obey everything I have commanded you. And surely I am with you always, to the very end of the age.” (Matthew 28:20)