Major Mavis McPherson was promoted to glory on Friday 18 February 2022, aged 91. She walked home with her Jesus after faithfully serving in officership for 69 years, one month and 17 days.

Mavis was born on 29 May 1930 at Wangaratta (Vic.). She left the Brunswick Corps in 1952 to enter Officer Training College in January 1952 as a cadet of the Intercessors session. Following her commissioning on 5 January 1953, Mavis was appointed to the Traralgon Corps. 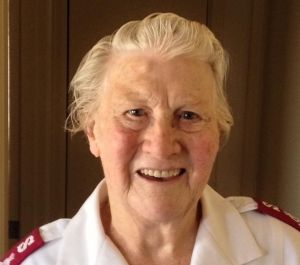 In each appointment, Mavis gave unreservedly of herself, and there are many who will recall, with affection and gratitude, her ministry to them.

On 1 June 1988, Mavis entered retirement. In retirement, Mavis was involved in Companion Club and other church activities. She loved sewing and was an avid, passionate Collingwood supporter.

Our love and prayers, along with our heartfelt sympathy, cover her niece Glenda, nephew Craig, and their families.