Ruby Carlyon was born on 20 July 1919 at Allora, Queensland. She entered The Salvation Army Officer Training College on 6 March 1940 in the Hold Fast session. Following her commissioning on 23 October 1940, Ruby had appointments at Mullumbimby and Maclean. 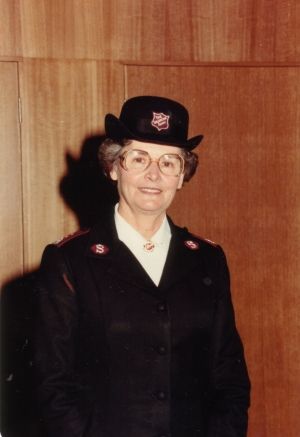 Ruby married Frank Clarke in December 1941 and they were blessed with two daughters – Dorise and Elizabeth (Beth). Together Frank and Ruby had corps appointments at Dorrigo, Tenterfield, Murwillumbah, Casino, Uralla, Queanbeyan, Ashfield, Willoughby, Warwick, Paddington (Qld), Coorparoo, Wallsend, Rockhampton, Orange, Taree, Wollongong, Ipswich, Brisbane City Temple, and Dulwich Hill. They also had a divisional appointment in the Sydney Central Division and their last appointment was at Mancare in Newcastle. Frank and Ruby retired to Erina in February 1979 where Frank was unexpectedly promoted to glory in December 1979.

In retirement, Ruby was involved in the Gosford Corps and enjoyed visiting her family – Dorise and Ray Allen and Beth and Warren Stoodley and spending time with her five grandsons.

In 1988, Ruby married Ron Walker and subsequently moved to Wollongong where she became involved in the activities of the corps.

Ruby struggled with the loss, however, Ruby’s strong faith in her Lord was evident to everyone. Her life of faith and prayer has been a tremendous challenge and encouragement to many.

Ruby went to be with her Lord from the Anglicare Nursing home in Castle Hill, Sydney. Our love and prayers along with our heartfelt sympathy surround Warren and Heather, grandsons Major Scott Allen (Sharon) and Rod, Paul (Ruth), Greg, Mark, and her great-grandchildren.

“Her master said to her, ‘Well done, good and faithful servant.
You have been faithful ... enter into the joy of your master”
(Matthew 25:23).

A funeral service of thanksgiving and celebration of Brigadier Ruby’s life will be held on Wednesday, 13 October 2021 at 11.15am at Palm Chapel, Macquarie Park Cemetery and Crematorium, Cnr Delhi Rd & Plassey Rd, North Ryde, NSW 2113.

The live-streaming link of the service can be found on this website: https://www.albertmeyer.com.au/live-streaming/

For those who may want to contact the family during this time, please see the following contact information: Warren Stoodley, 6 Cameron Ave Pennant Hills NSW 2125. Ph. 0417 405 628