You are here: Home › Global Focus › Aussie Officers Around The World Sweden And Latvia Territory

Aussie officers around the world - Sweden and Latvia Territory Aussie officers around the world - Sweden and Latvia Territory

Australian officer Captain Kris Halliday is playing a major role in helping to re-energise the Army in Sweden.

Serving in Sweden is a great privilege, as the call to serve outside Australia was prevalent in me as long as that of officership.

I’d visited Sweden a few times, having developed some great friendships with Swedish Salvationists at the Boundless Congress in 2015 and seeing a great pioneering spirit among them, so there was a sense of familiarity on arriving.

The Salvation Army is relatively small and unknown here, having once been one of the world’s biggest territories. After years of decline, there is a dedicated bunch of people deeply committed to rediscovering what it means to be the Army in a context where the average Swedish person doesn’t know who we are or where we fit.

At the forefront of that is Salvation Army work in almost every Swedish city with refugees and asylum seekers, and a significant presence in the area of fighting human trafficking – something that is aided by the closeness of Europe and some great cross-country collaboration.

My appointment as part of the corps leadership team has two distinct responsibilities: social work in the bustling, eclectic city of Gothenburg, and leader of the ‘restart’ of The Salvation Army in the nearby city of Mölndal. 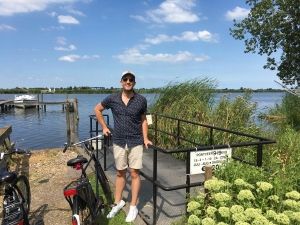 Serving overseas has long been a desire for Kris.

There are four corps, two corps plants and 10 social programs in Gothenburg. Among the highlights of my time so far has been developing partnerships (and friendships) with Salvationists working across the city. There is a great energy and enthusiasm as we explore ways to support each other and work together for growing, sustainable mission.

As well as multiple worship expressions and a range of services for refugees and local families, from crisis intervention to long-term relational support, a key area of work for our corps in central Gothenburg is among the huge numbers of Roma people.

This highly persecuted people from Romania and Bulgaria generally sleep outdoors, while doing whatever they can (from begging to prostitution) to raise money to feed and educate their children.

We operate a centre for the Roma people including meals, showers, health services and education, and just last month we launched a partnership with other churches that sees us host a safe place for Roma women caught in prostitution and trafficking.

We see our role as providing safety here and doing what we can to fight the cause of the injustice. Mölndal is a blank page. We’re rebuilding the Army with a focus on going back to our roots and understanding our mission to the margins of society.

We are seeing great relationships form with locals and community leaders and are getting clear understandings of what this new expression of the Army could look like in this city.

Soon we will move into a building in the centre of a new neighbourhood as one of the first occupants of this development – to be home to 8000 people.

With many people still connected to the Army who were at the old corps in Mölndal, our challenge is to respect the past and honour their legacy, but to also step out in boldness doing things that the Army hasn’t done before.

Sweden is a nation with many independent, well-educated people, the vast majority of whom don’t see the need for faith and don’t understand the role of the Church or what The Salvation Army is.

Sweden is also a land of paradox. It’s one of the world’s most wealthy, healthy countries yet has among the highest rates of depression and suicide. People are friendly but proudly individual and lonely. Addictions are rife. Refugees and migrants have been welcomed but have found themselves disconnected and isolated, especially the young who travelled here alone. It is one of the most accepting, inclusive countries in the world but the Army is still grappling with how to accept those who are LGBTIQA.

Social security is among the best in the world, but high rents and the cost of living means many, especially single mothers, have a desperate struggle to survive.

In all of these areas there are passionate Salvationists on the edges working for change, loving their neighbour, meeting needs, sharing the love of Jesus, starting conversations about us being a truly inclusive Church and providing places of acceptance, refuge and community.

It’s great to be here at this time to join them. Among the personal challenges, being so far from family and friends isn’t easy. A basic grasp of a rather complex language means that communication, an area that has always been a strength for me, has at times been a struggle.

As I come to the end of my first year here in Sweden, seeing God at work in and around me as I immerse myself in life and ministry, I’m thankful for this incredible opportunity to serve for a term away from home. 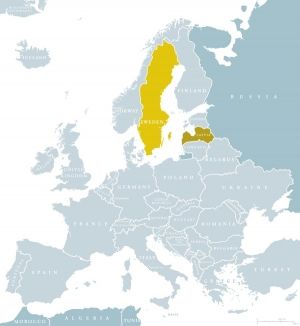 The first Salvation Army meeting in Sweden was held in 1878 at Varnamo, led by the young Chief of the Staff, Bramwell Booth.

In the congregation was Hanna Ouchterlony, who was inspired to become an officer and began the Army’s work in Stockholm on 28 December 1882.

Hanna, who rose to become a commissioner, was instrumental in the Army establishing a women’s home and a men’s shelter by 1890.

The Army started in Latvia in 1923 but closed in 1939 due to the outbreak of World War Two.

It was re-established on 18 November 1990, and the re-named Sweden and Latvia Territory came into effect on 15 November 1994.