You are here: Home › Global Focus › Canadian Couple Turning The Tables On Refugee Past

Canadian couple turning the tables on refugee past Canadian couple turning the tables on refugee past

Corina Ardelean with her ‘buddy’ Sampson the delivery van. Corina enjoys driving the vehicle to deliver groceries and other household items to needy families in the Maple Ridge and Pitt Meadows area of Canada.

By Darryl Whitecross and Colleen Flanagan*

John and Corina Ardelean know what it is like to depend on others for help. Both are from refugee families of the 1989 Romanian Revolution. 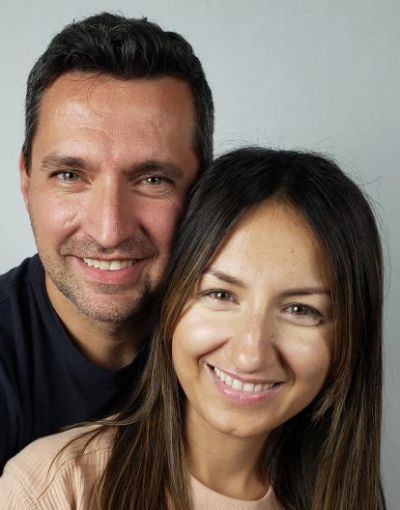 John and Corina Ardelean know first-hand the struggles of not having enough food to put on the table.

Corina’s parents were forced to leave her and two of her sisters behind with their grandparents when they fled to Canada, after having spent time in a refugee camp in the then neighbouring country of Yugoslavia, with the aim of making a better life for the family.

Corina said her father was in the Romanian Army and was found to be a Christian, which was illegal. It was another two years before Corina and her siblings saw their parents again, having followed them to Vancouver in 1991 when she was eight years old.

John’s older sister escaped from Romania in 1988 with her husband and sponsored the rest of the family – including John, his parents and siblings – in 1992.

Corina said that, when they arrived in Canada, their families depended on the local food bank. They could barely wait for the next hamper delivery, not knowing what they were going to eat.

It was their past that shaped the people they have become. They are now feeding and helping people who are struggling to put food on the table and make ends meet.

Corina, who still dreams of one day being a trauma nurse, is employed by The Salvation Army’s Ridge Meadow Ministries, which is about 50km west of Vancouver.

She began her role in October last year as a community and family services advocate assistant and works five days a week as part of the team that runs Sonia’s Cradle – a ministry that provides clothing, food and other assistance to the needy in the community, and also a listening ear in the “tender moments” when “raw emotions” are shared by the clients: “It’s so much more than just the food,” she said.

Corina said it was a blessing to be part of the Sonia’s Cradle ministry as she could relate to the people assisted through the initiative. She said enjoyed getting out into the community for donation pick-ups, driving her “buddy” Samson, the centre’s “huge delivery truck”. (They have a smaller one ... Delilah!)

Ridge Meadow Ministries executive director Mark Stewart said the ministry helped about 60 families a month and ran a ‘Bag Lunch Program’ in schools in the area.

For Corina, it’s a balance of work, ministry and family. Starting her role with the Army coincided with a ministry Corina and John, a self-employed timber flooring specialist, launched a few months before called City Serve, which is run through Christian Life Assembly in Maple Ridge. City Serve delivers a range of goods and community services each week - not only food - to those in need.

Corina said the couple knew they wanted to help people in whatever community they called home. Seven years ago, the couple sold their house in Coquitlam and moved to nearby Maple Ridge because they felt a calling to do missionary work.

About five years ago, they began working as local missionaries in Surrey where they attended a Romanian church. Just over two years ago, they started a bread night in Maple Ridge – at Whonnock’s Wildwood Fellowship Church. On Tuesdays, they would pick up end-of-the-day bread from a local bakery and take it to the church where they would divide it up for distribution.

After having completed a leadership course at CLA, they decided to turn their bread night into something more. Corina said a component of the six-week course was that, at the end, the challenge was to “launch a ministry” and that is how their latest venture began.

Over the past five months, the Ardeleans have done weekly deliveries of groceries to about 30 needy families on a Wednesday, including to Sudanese refugee families.

That mission is run from a renovated room at the CLA church, which she and John do after knock-off time at Sonia’s Cradle. On Wednesday mornings, they help Syrian refugees attached to a Middle Eastern Friendship Centre, also delivering food hampers, then, in the afternoon, turn the room at CLA into a grocery store and allow clients, one at a time, to enter, to choose their goods.

In addition to groceries, Corina and John, who have three teenage children, also hand out gift certificates for other stores and services – whatever they can get their hands on.

“People that we help are just extraordinary people,” Corina said. “They just find themselves in a situation that they don’t want to be in.”

She said that, because of the calling they had in their lives, the Ardeleans were able to help them in a non-judgmental way while preserving their dignity.

* Colleen Flanagan is a reporter with the Maple Ridge News, Black Press Media in Canada.