You are here: Home › Global Focus › Christmas In The Philippines A Tale Of Two Cultures

Christmas in the Philippines - a tale of two cultures

Christmas in the Philippines - a tale of two cultures

Majors Rod and Debbie Serojales with their daughters Shaella (9) and Amaya (7) enjoy the traditions of both Australia and the Philippines during the Christmas season.

I arrived in the Philippines during 2006 and for the past 13 years, my Australian customs have been entwined with the Philippines way of living and celebrating. My Filipino husband Rod and our two daughters try to connect the cultures and traditions of our two countries as much as possible. 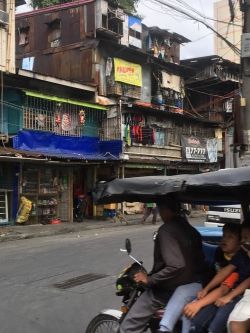 Christmas decorations are popular in the Philippines.

One thing that you immediately notice in the Philippines is that they like to celebrate Christmas for as long as possible! On 1 September, when you enter a store, you will be surrounded by Christmas decorations and carols will play over the loudspeaker as you shop.  Christmas begins during the first ‘Ber’ month, September and is a four-month celebration in the lead up to Christmas Eve, which is the main focus.

Decorating your home and workplace is very popular. Hanging a ‘parol’ in your home is a Christmas tradition. A parol is a star lantern that lights up and is traditionally made from bamboo strips and cellophane. It represents the star that guided the Three Wise Men. They are very popular and can be seen all around the country.

Noche Buena is Spanish for ‘good night’, it is a midnight (late night) feast celebrated with family, friends and neighbours. It is held at midnight because you are welcoming in Christmas Day.

There is usually a variety of food prepared: spaghetti, pancit (noodles), macaroni and, if you can afford it, families will also have lechon (roasted pig), ham and fruit salad. Of course, like every day, there is always plenty of rice!

Children in the Philippines have many godparents. They are called Ninang (godmother) and Ninong (godfather). On Christmas Day the children will go to each home to visit and ask them for presents! So, you need to be ready even with something simple.

For us, our family tradition while living in either Australia or the Philippines is to celebrate Noche Buena early evening on Christmas Eve, eating Filipino cuisine and remembering the customs of Rod and his homeland. Then the girls will go to bed by 9pm so that they can wake early to see if any gifts have been delivered to our house during the night. We then have a Christmas Day roast meal with yummy Australian delights for lunch, including homemade bon-bons, and then feast on leftovers for days!

The Christmas season is celebrated very much like in Australia with a real focus on families and loved ones coming together. The Philippines is a land of contrast, with people who are financially able to provide gifts for others, yet there is also a majority of the country where poverty is rife and it is possible that there are no gifts to offer. There is still a real excitement for Christmas though – it is not about giving but being together even in the most difficult of situations.

This year our daughters (aged 9 and 7) have decided that we will purchase some simple gifts and give them to children who live with their families on the street around the area where we live. What a great way to bring some joy to others when their lives are so different, a real privilege to connect and share the message of love this Christmas.