You are here: Home › Global Focus › Coming In From The Cold

Coming in from the cold Coming in from the cold

A winter scene in Reykjavik, where The Salvation Army has been in operation for the past 125 years.

Australians enjoy – or rather swelter through – the summer months, with days of bright sunshine and long, warm evenings. On the other side of the world in Iceland, the story is completely different at this time of year.

It’s winter, and the days are short. The sun rises around 11am and sets close to 3pm; there’s metres of snow blanketing the ground and temperatures are well below zero. Iceland is a nation of dramatic and contrasting landscapes, from volcanoes, geysers, hot springs and lava fields, to massive glaciers, abundant waterfalls that freeze in winter and icebergs on the beach. This Nordic island nation in the North Atlantic is the most sparsely populated country in Europe. Most of its 360,390 people live in the capital, Reykjavik, which is approximately 16,700km from Canberra.

Iceland is part of The Salvation Army’s Norway, Iceland and the Faeroes Territory. In May, The Salvation Army will mark 125 years of ministry in this remote and beautiful country. The Salvation Army in Iceland is small but active and making a big difference in lives of young people, asylum seekers, refugees, recovering addicts, the homeless, the lonely, disadvantaged families, and those seeking a relationship with Jesus.

There are two main areas of operation – Akureyri in the north and Reykjavik in the south. There’s also a small corps at Reykjanesbær, south-east of Reykjavik, on the former United States military base near the international airport, run by envoys Ben Eli and Eyd Dam.

Lieutenants Hjördís Kristinsdóttir and Ingvi Skjaldarson are corps officers in Reykjavik. Hjördís also serves as the spokesperson for anti-human trafficking in the country. Between 30 and 50 people attend services each week, with the number growing close to 100 in the Northern Hemisphere summer months through camps and family activities. Numbers are beginning to increase after many years of decline. Local leadership is being strengthened and made the front line of the corps, and volunteers are visible on the streets. 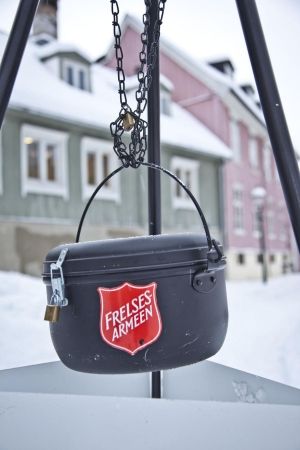 The Salvation Army kettle is a familiar sight on the streets of Reykjavik.

The Salvation Army centre, which will soon move into new premises to increase the potential to keep growing, is open every day. Up to 500 people visit the centre each week for programs, support, a listening ear, or simply to experience a safe and accepting place.

“For the past two years, we have been focusing on programs for children, youth and families and that’s one of the big reasons we are growing,” explains Hjördís. “We have clubs for children and youth, after-school homework help two days a week, and family time and Messy Church once a month. There is also a weekly open house and hot meal for children and teenagers, with around 20 coming along each time.

This is a safe haven for them – a place where they can come, be seen and known, and talk about life with adults who respect them. Every young person needs at least one place like that.” Refugee families are regulars to the centre, located near a bus hub and in a neighbourhood with many social disadvantages.

They have come to Iceland from all over the world, but especially Africa and the Middle East. The children and young people attend the clubs and homework help, and the mothers come to the sewing groups. Some have accepted Jesus and are part of the corps.

Homelessness is a huge problem in Reykjavik, particularly for those with drug and alcohol addictions and mental illnesses, and many are looked down on by society. “We treat all people as human beings, with respect, and so many alcoholics and drug addicts come here for support and assistance,” says Ingvi. “There is simply not enough crisis accommodation or shelter space for addicts in our city.” Human trafficking is also a growing problem in Iceland, particularly in the construction and hospitality sectors.

In the long term, Ingvi and Hjördís would like to run a Salvation Army shelter for victims of trafficking in partnership with other agencies and government bodies. “Initial plans to make this a reality have been discussed with authorities,” says Hjördís.

The Salvation Army in Iceland, as a small organisation, makes it a priority to work together with other agencies and churches, both nationally and overseas. “It is important for us to be The Salvation Army, and also to partner with others in the best interests of our community,” says Ingvi. “We are part of the universal Church in Reykjavik, Iceland and the world. 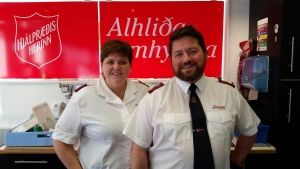 If we want people to come to Jesus, the Church has to grow, and not just The Salvation Army. We are seeing an increase in people coming to the Army, not so much as soldiers, but as being part of our work in both the corps and outreach and seeing the Army as their family.”

As the corps prepares to move into its new premises, Ingvi and Hjördís are grateful for all God is doing and has done. “We are thankful that we have been placed here and used as workers in the field, and can build on what others have been sowing,” says Hjordis. “It’s humbling and a privilege and we look forward to the years ahead.”

Akureyri is the country’s second-largest city, with a population of around 18,500. Winter here is long, dark and freezing, but The Salvation Army is a beacon of hope, light and genuine warmth to the surrounding community. Captains Birna Dís Vilbertsdottir and Hannes Bjarnason, a married couple, have been serving as corps officers here since 2013.

Akureyri Salvation Army is a small, traditional corps undergoing gradual but definite and intentional transformation, growth and recognition in the community. “We are not here to have a cosy singing club, but to change, serve and impact the community,” Hannes says.

The corps runs a children’s ministry, women’s ministry, second-hand store where refugees from around the world volunteer, and a growing and vibrant group for teenagers. A weekly open house for local families sees many people coming together to cook and share a meal. A prayer meeting and community lunch is also attracting more people to the corps.

“On Thursday nights we have a knitting club, and we knit dolls for children, as well as socks,” says Birna. “We send the socks to The Salvation Army in Nuuk in Greenland, which they sell to support Williams Café – a facility that provides food for the large homeless population there. The Icelandic wool we use is very warm and special; sheep here are descended from the Viking time as we don’t import any others, so the wool has a 1100-year heritage. The lambs are born in the spring and go up to the mountains, so they need the warmest wool.” Captains Birna Dís Vilbertsdottir (left) and Hannes Bjarnason, are the Corps Officers in the northern town of Akureyri.

Alcoholics Anonymous meetings at the corps bring between 40 and 50 people into the building each week. “We are trying to involve them in the life of the corps,” says Hannes. “We need volunteers, they are seeking a higher power as part of their program, so why not try to involve them?” The corps also opens on Friday nights for board games and cards, “to give people who don’t want to get drunk, a safe place to go,” says Hannes.

This is very popular with people from the local community, with the cakes donated by the local bakery an added attraction! The Salvation Army is also part of community efforts to help those experiencing homelessness. On 31 October last year, the Akureyri Municipal Council donated 5.6 million Icelandic króna (AUD$65,573) as operating capital for this project run under the auspices of The Salvation Army.

“This will be a small apartment, with residents supported by The Salvation Army and the community,” Hannes explains. “We plan to have five of these apartments in our corps building, with access to the services we provide. It’s easier for youth to buy cocaine, amphetamines and other drugs here than it is to buy pizza, so we are focusing this project on young people from 18-25.

We will help the guys coming here get back into the community through education, volunteering, working and learning basic life skills. It’s also an opportunity to help the young people feel known, accepted and cared about.” The local community is gradually learning more about The Salvation Army and, as Birna explains, they love the work being done in the town and the Army’s welcoming approach to everyone.

“We are also known, though, for working together with other organisations and churches, to help people in need and at special times of the year, like Christmas. We want to be the first place people turn to when something goes wrong in their lives. We can also do more if we are working together!”

Despite the challenges, Birna and Hannes enjoy living in Akureyri, where one of their daughters and two grandchildren also live. “We are not fans of the snow here though,” they laugh. “We get metres here every winter, which lasts for months, and we are from Reykjavik where that doesn’t happen!”

* Others writer Simone Worthing prepared this article after visiting the two corps during a recent trip to Iceland.