Apiarist Kisimba Pascaline, from Mwenda in the Democratic Republic of Congo, with the beehive she has in her cassava garden. Kisimba has been trained in beekeeping as part of a United Kingdom and Ireland Territory-sponsored project in the poor Central African nation.

In the tiny village of Mwenda, in the east of Central Africa’s Democratic Republic of Congo (DRC), Kisimba Pascaline works hard to provide for her children – as an apiarist. Amid the deadly civil unrest that grips the village of about 500, Kisimba was trained as a beekeeper as part of a program introduced by The Salvation Army to produce honey not only for her family to eat but also to sell to help put food on her family’s table and to pay for school fees.

Kisimba is one of many Army-trained farmers and villagers in apiculture – the technical term for beekeeping – as a way of working their way out of poverty in the DRC.

Among the houses made of mud with grass-thatched roofs, no electricity, piped water or decent schools, beehives are springing up thanks to the support of the Army’s United Kingdom and Ireland Territory (UKI).

The UKI project is being run in rural Katanga and Bateke to develop the traditional knowledge of beekeeping to benefit livelihoods and the environment.

Democratic Republic of Congo Territory Beekeeping and Agroforestry program coordinator Ebeyi Moke said it was more cost-effective to train the farmers to make their own beehives and know where to locate them.

“Giving them this knowledge enables them to be able to add more beehives of their own, and they can even adapt the hives by using locally available materials,” Ebeyi said.

Kisimba said she was excited to learn to make a hive and set one up in her cassava garden [cassava is a root vegetable and the most common staple food in that part of the world].

Violet Ruria, Program Adviser, Sustainable Livelihood Development with the UKI International Projects Office, said the Army’s acacia tree-planting program was introduced initially to help reduce soil erosion – which was an issue due to land clearing, regular heavy rain and flooding – and the beekeeping project grew out of that.

Two training modules on beekeeping and agroforestry designed by the Army are being used across the Territory. 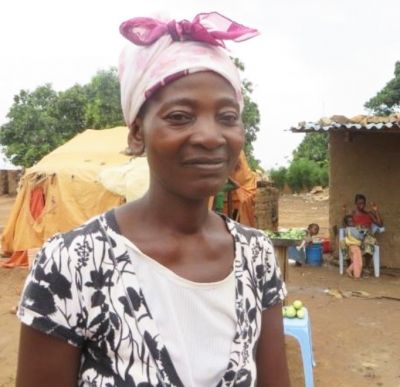 Mande Ngoi, a participant in the United Kingdom and Ireland Territory apiculture project in the Democratic Republic of Congo Territory.

Violet said the DRC was rich in natural resources, including diamonds, copper and other valuable raw minerals, but remained one of the poorest countries in the world, mostly due to continuing civil conflict and food shortages.

The tree-planting program was implemented through associations of small-scale farmers, where each association established tree nurseries and distributed the seedlings to members. Once the communities grow enough trees, they are trained in beekeeping.

Violet said honey bees were “highly valued” with most honey traditionally collected from wild bees in forest hives, which was not profitable for most people and posed a security risk for women, so the Army helped develop a domestic program. She said that training villages to build their own hives meant they were more self-sufficient.

Mande Ngoi, a participant, said the program was important to the villagers: “We want to progress in our lives and defeat our lack of enough food. The honey we harvest will provide nutrition to our children. We will also be able to sell part of it and meet some family needs.”

Violet said that more than 500 beehives had been set up where the training had taken place by more than 300 farmers, and honey production continued to increase.