You are here: Home › Global Focus › Cool Idea Gives Texans A Chance To Chill Out

Cool idea gives Texans a chance to chill out Cool idea gives Texans a chance to chill out

Salvation Army officers, soldiers, staff and volunteers from Lubbock Corps in Texas trying one of the freeze pops they have been handing out to the public during a heatwave in Texas.

With temperatures soaring across the United States, The Salvation Army in Lubbock, Texas, has come up with an idea to help the community beat the heat – ‘Pop Drop’ trucks. The freeze pops that Lubbock Corps is handing out during a heatwave in Texas.

The corps last week deployed two trucks throughout the city – which is the 11th most populous city in Texas – to distribute freeze pops (icy poles in Australia). One truck set up in a static location for two hours and the other was driven about the city in the style of what Australians see as the Mr Whippy van.

Lubbock Corps Officer Major David Worthy said the freeze pops were “cold and refreshing” treats for the public to enjoy.

David said The Pop Drop initiative was an extension of a program the corps ran throughout the year, mostly for the vulnerable and homeless, where services are taken “directly to people” in their neighbourhoods – on the streets and away from “Salvation Army-hardened facilities”.

“In the United States, one of the summer treat favourites is freeze pops. They are something that all Americans grow up with. They’re basically fruit-flavoured juice frozen into long sticks,” David said. “On a warm day, they provide a cool refreshment that quells the heat just a bit and just makes a person smile.

“It gets warm here in this part of West Texas during the summer. At times, it gets very hot. We’re in the midst of a prolonged two-week spell where temperatures are hovering between 105-115 degrees Fahrenheit (40.6-46.1 Celsius) every day. 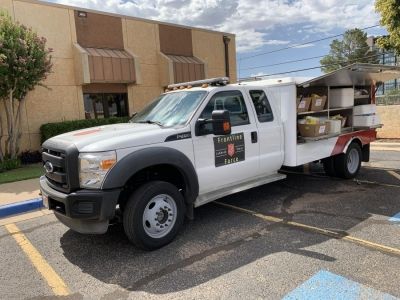 One of the Pop Drop trucks used by Lubbock Corps to hand out to the community during the Texas heatwave.

“Due to that, our mobile Pop Drop trucks – named so because of freeze pops – hit the streets to provide a quick bit of refreshment and respite to the general public. We utilise two trucks – one remains stationary at a public location (such as a Walmart store, large business or park) and the other roves throughout the area, stopping at random places where people congregate to distribute the freeze pops there.

“It’s a simple way for the Army to serve the needs of the entire community; not just the usual vulnerable population groups, such as the homeless and poverty-stricken, that our programs/services usually serve and impact. The community has responded very well to the initiative and we see it as a way for the Army to give back to our community for the support that it gives us throughout the year.”

The heatwave has seen an increase in the number of people calling into the corps’ Empowerment Day Center for the homeless. “Assisting those people during extreme weather reminds us that the extreme temperatures are impacting the entire community, not just vulnerable population groups,” David said.

The Centers for Disease Control and Prevention figures show that more than 600 Americans die each year from heat-related illnesses. In addition to the homeless, people over 65 years of age, outdoor workers, athletes, infants and people in low-income households were among the most vulnerable. In North Texas, the Army has opened 13 outdoor ‘cooling stations’ in five counties as temperatures went past triple figures on the Fahrenheit scale. Some centres offered water bottles and portable fans.

An Army cooling station in Las Vegas, which usually opened in May, had a delayed start because of a funding delay and looked a little different when the doors eventually opened – because of COVID-19 social-distancing guidelines. Chairs were spaced at the required distancing, masks were required and capacity was reduced to around half its usual numbers. The time people spent at the centre also was being reduced. As well as cooling off, people could shower and wash their clothes.

Many churches and community centres throughout Maricopa County, in Arizona, where the Army also operated emergency shelters for heat relief over the weekend, were offering cool, indoor areas with free water for anyone without access to air conditioning.

In Quincy-Hannibal area of Illinois (the boyhood home of Mark Twain), Captain Michael Sjogren said the Army was blessed to be able to provide those seeking shelter from the heat “with a clean and safe place to cool down”. 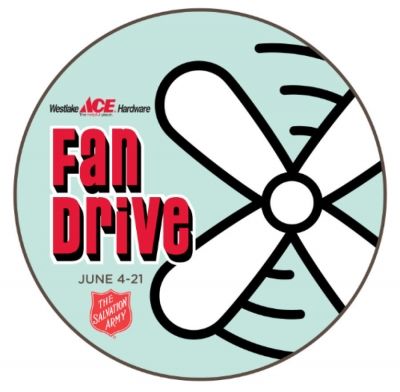 In another initiative to help people stay cool, the Army is also the beneficiary of an annual ‘fan drive’ where, in June, the public is asked to donate at the cash register at a major hardware store chain by rounding up their purchase total. The money raised is used to buy portable fans, which are then handed out to the less fortunate struggling in the heat.

The fan drive began as a local community event about 15 years ago in Hutchinson, Kansas, and has evolved to be one of Westlake Ace Hardware’s biggest chain-wide community service projects.

Westlake president and CEO, Joe Jeffries, said the drive was “an important way” for the chain to give back to the communities where it operated. Westlake, which is 115 years old has 139 stores in 12 US states. “All of the money donated is given back to the local Salvation Army in the form of fans,” Joe said.

To give the drive a little star power, former Dallas Cowboys American football standouts, Drew Pearson and Raghib Ismail, helped give away fans at the Army’s Pleasant Grove Corps community centre – one of 13 drive-through pantries run across north Texas.

Along with the fans, the footballers and some Dallas police officers teamed up with Army volunteers to hand out personal protective equipment, hand sanitiser, groceries and water at the centre, which was also distributing US Census 2020 forms and providing free COVID-19 testing.

In Topeka, $US6000 was donated through one of the hardware chain’s stores, which enabled the purchase of about 420 new box fans for the Army in the city. The Army in Springfield, in southwest Missouri, about 250 box fans were bought from donations given at the till. This was up from last year’s 150 fans. Last year, in the Oklahoma City area, more than $US4500 was donated equating to 301 fans.