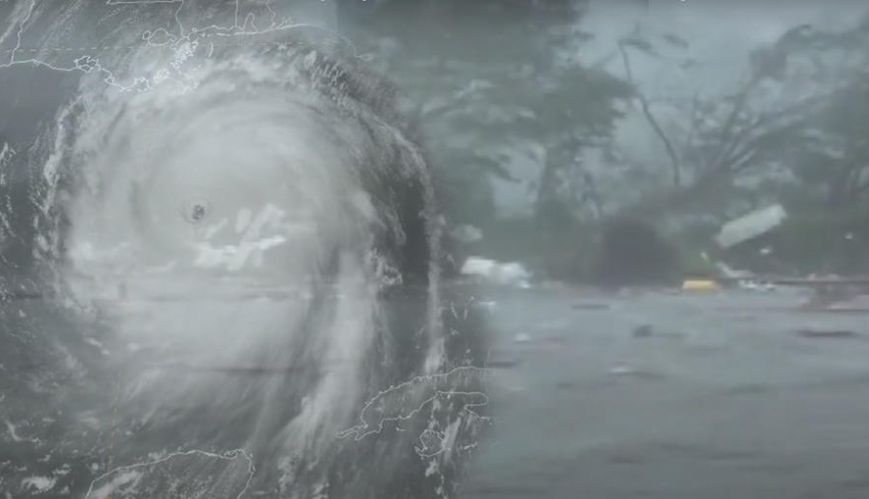 Above: Hurricane Katrina makes landfall on 29 August 2005, causing great devastation to the city of Biloxi. Filmstrip below: Monica Shiyou, Jeff Koonee, Wanda Lowe, Danielle Emery and Major Anita Caldwell, and ‘The Dome’, which served as a makeshift headquarters for Army community and disaster relief services for many months. Artwork: Darryl Whitecross

Hurricane Katrina is considered one of the most deadly to have struck the United States. More than 1200 people were killed and $US125 million in damage was caused when the Category 5 storm whipped through New Orleans and surrounding areas of Louisiana’s Gulf Coast in the country’s south-east in August 2005.

Overnight, Katrina went from a Category 1 to Category 5 hurricane, trapping many people in their homes as they slept.

As the state paused to mark the 15th anniversary of that storm, it is again reeling after a similar storm, Hurricane Laura, hit the region, almost to the day Katrina struck.

As part of the recognition of Katrina and the effect it had on the area, a special documentary was produced to recognise the work of officers and volunteers from The Salvation Army’s Mississippi Gulf Coast Command (MGCAC) in the storm’s aftermath.

The MGCAC is in the Alabama, Louisiana, Mississippi Division of the US Southern Territory where, at time of publication, communities were bracing for another wild storm as Category 4 Hurricane Laura headed to the region, with Louisiana, Texas and Arkansas in its path. The Army’s emergency services were being activated to meet the needs of survivors and first responders.

Morgan Shiyou, Kroc Center Public Relations Director, said Army employees who were in Biloxi during the aftermath of Hurricane Katrina, employees who served in other disasters or officers, were interviewed for the film.

Kroc Center membership coordinator Jeff Koonce said in the film he had slept at his father’s home as the storm approached. When he awoke in the morning, the storm was raging and furniture and cars were floating down the street as floodwaters rose. “But as quick as it came in, it went out,” said Jeff, who wasn’t working with the Army at the time.

He said when he looked at his house from the street, it looked relatively unscathed but when he opened the front door to look inside, the house was “completely split into two pieces”.

In the aftermath, he said the Army helped him and his family get on their feet again and had assisted in other ways since, so he decided to give back to the church that helped him and is now a volunteer on the emergency relief team and has been able to help victims of other similar storms.

Wanda Lowe, originally employed as a bookkeeper with the Army pre-Katrina and now Kroc Center Human Resources Manager, said that living through the storm and being on the front line of the Army’s relief and assistance efforts had “made me a better person; it made me a stronger person; it made me a more compassionate person”.

Morgan said the Biloxi City Council produced the film. She said, ironically, the footage was filmed by Renny Sherman at the Army’s Kroc Center in Biloxi, which is built on the property the Army had just bought the day before Katrina hit. The property was the city’s former Yankie Stadium. Renny films and edits most of the programming on the council’s own television channel, BTV, and its social media pages.

Morgan said, because of the storm, construction of the Kroc Center was put on hold and a temporary structure – known across the city as The Dome – was erected about a month after the storm and operated as a community centre and disaster services site for about 18 months.

Danielle Emery, Kroc Center Director of Operations, said the landmark dome helped bring the Biloxi community “back to life” as it served as a hub for Army services. It has been replaced by the Kroc Center, which Danielle said continued to be a “beacon of hope” to the city. It is one of 26 across the US.

A laundry shed built after the storm remains and is being used as a pottery shed where the Army runs various community classes.

Area Commander Major Anita Caldwell, who, with her husband, Bradley, was an offer in Russia when Katrina devastated Biloxi, said that since Katrina, a “change comes over the community” and stress levels rise when a hurricane approaches.

Vincent Creel, one of the filmmakers, said the city had looked to take a different approach at Katrina for the 15th anniversary of the storm and the documentary was the result.

Vincent, chair of the Army’s Mississippi Gulf Coast Community Relations Development Committee, said that having interviewed several people for the film, “we could see a compelling story: the people behind the shield”. “Great work by great people, telling a great story,” he said.

The 20-minute film, titled ‘Salvation Army: the People behind the Shield’, was aired at 8am, 1.30pm and 8pm each day during August on BTV.

Cecilia Dobbs-Walton, City of Biloxi Public Affairs Manager, said the council had originally planned for the film to be “just a glance back” at the Army’s work during the storm, but it turned into a much bigger story.

Lensman Renny said on the council website that he had come to realise that the people he had filmed had experienced “the same fear, loss and uncertainty” as the people they were helping during the Katrina cleanup.

“These people really are heroes. They have a passion for what they do. They are champions of faith and the human spirit.” 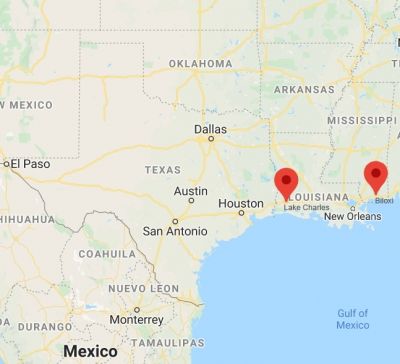 An edited Google map to indicate approximate locations of Lake Charles and Biloxi that felt the full force of Hurricane Laura.

Meanwhile, as Biloxi paused to acknowledge the work of the Army in the aftermath of Katrina, in nearby Lake Charles, the full force of Hurricane Laura is new and real. The Category 4 storm struck the region on 28 August and, again, the Army’s emergency response crews were back on the front line, helping the thousands of victims.

The damage by Laura was described as “so great” that victims would not be able to rebuild and it could be months before power is restored. Fourteen people have died.

Laura was the seventh storm to strike America so far this year, setting a record for US landfalls by the end of August. Laura crossed into the US after having killed about 25 people in Haiti and the Dominican Republic.

Lake Charles, an industrial and casino city of about 80,000 people, is about halfway between the Houston, the biggest city in Texas, and Biloxi.