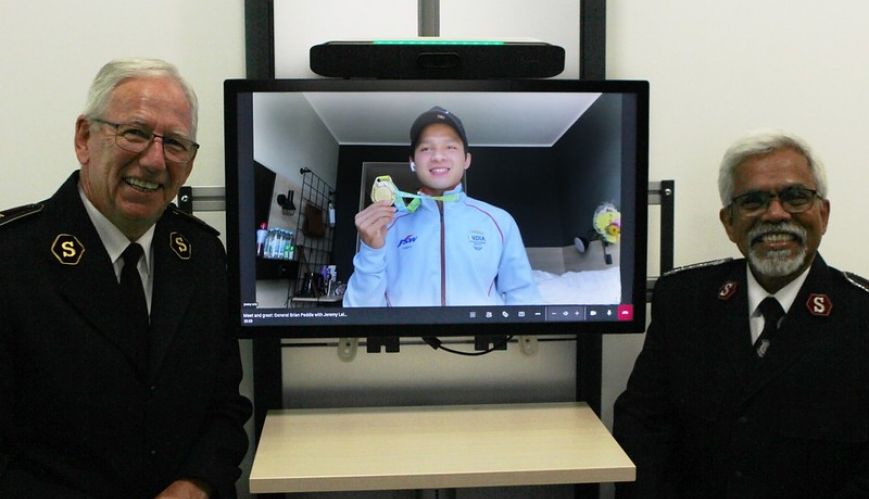 Receiving the General’s warm congratulations with gratitude, Jeremy made it very clear to whom the glory belongs for him: “This is not my power – this is the power of Jesus Christ.”

Nineteen-year-old Jeremy is astonished by his sporting success, but his deep commitment to his faith and sincere and humble spirit are just as impressive. The future looks bright, and upon returning home to India, Jeremy will commence training at the Neeraj Chopra Institute of Sports for the Paris 2024 Olympic Games.

In a question-and-answer with Lauren Westwood, of Communications, International Headquarters, Jeremy shared more of his story below.

Jeremy, you are a gold-medal winner and a Commonwealth champion! How does that feel?
I feel all the joy in the world. In my preparation for the Commonwealth Games, I spent time with God in personal prayer, but I’m grateful to know that my family and friends have prayed for me too. The Salvation Army and my home corps have been really supportive, and I know they have lifted me in prayer. I am certain that my success is the result of this support, and for that I am thankful.

Jeremy gives glory to God for his win.

You mentioned your home corps, The Salvation Army Government Complex Corps in Aizawl, Mizoram. What does this connection mean to you?
The Salvation Army has been part of my family for many generations on my mother’s side, and my father joined after he married my mother, so I was born into a Christian home. My childhood was occupied with many Salvation Army activities, such as corps cadets. Unfortunately, since moving away from Aizawl, my training regime demands so much that I have had to leave the corps cadets program, though I am sad to miss this fellowship.

After your win in Birmingham, you said, “I could not reach my best performance [because of injury], but Jesus helped me get this gold medal.” How has your faith sustained you in your career’s challenges and successes?
I have not always been a winner. There have been times when I have known failure, but my family have always encouraged me that God’s plan does not promise constant success. My family and friends would say, “Maybe this is God’s way. Maybe he has a better success in store for your future.” This has given me faith to trust that my future can be bright. Even in moments of success, like during the 67kg lift at the Commonwealth Games, I had a muscle cramp on my thigh, which really risked pulling me down. My physical strength is not the source of this victory, but it is the power of prayer that gives me this victory. The times when I am reminded of my own physical weakness remind me of God’s mighty power.

Do you have any words of advice for people striving for excellence in sport?
First and foremost, trust that God exists. Challenge yourself to believe in him, and 100 per cent believe that he is working. The second thing is that we have a duty to discipline ourselves in hard work. You may have people praying for you to do well, but success – in sport and in other areas – is the fruit of hard work and discipline.

The Salvation Army world celebrates you and your achievements. Many Salvationists around the world will cheer you on, both as you continue your sporting career and as a young Christian. How can we pray for you?
I ask for prayers that I will never surpass the need for God in my life. Of course, I want to continue to achieve greatness in my sport, but I do not want to lose sight of the success that God wants for me. I would also ask for prayers for my family and that I will remain the same person despite my successes as I continue to seek and fully rely on God.