You are here: Home › Global Focus › Gospel Bus Hits The Road In Holland 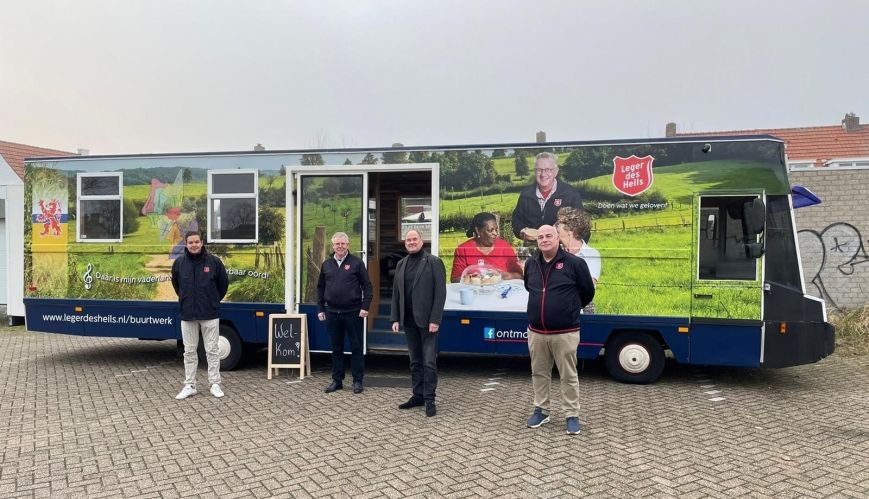 A 10-metre long converted mobile home with a maximum speed of 32km/h – called an ontmoetingsbus – has become a pivotal tool in the pioneering work of The Salvation Army in the south of the Netherlands. 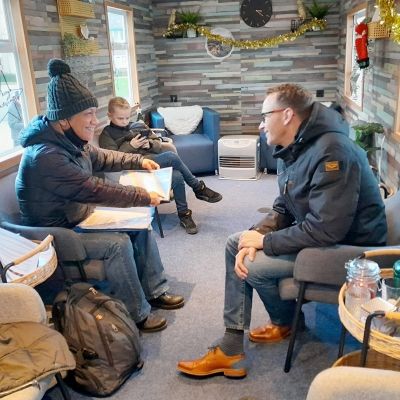 Good conversation, a cup of coffee, and a place to relax are all part of the comfortable surroundings inside the ontmoetingsbus.

Captain Aalt Fikse, who began the new work with his wife, Captain Tertia Fikse, said the ontmoetingsbus [ontmoetings is Dutch for ‘meeting’ or ‘gathering’] was one of three bought to help spread the gospel in the Sittard-Geleen area, which is part of the Netherlands and Czech Republic Territory. One bus is now fitted out and operational.

Aalt said one of the vehicles was funded by a Christian organisation in the area, and the others were government-funded by the City of Kerkrade. The second bus was expected to be operational by 1 April, after which work would be started on the third bus – for the city of Heerlen.

“We drive with this bus in the street, and people are invited to come in and drink coffee with us [or soup] and share their life,” Aalt said. “We also have a section with second-hand clothing to draw people in. IT can be used for all sorts of activities, from child to adult activities.”

The ministry began about five weeks ago, but the Netherlands is in a three-week COVID-19 lockdown, so the program has been put on hold.

The vehicles are 10m long and 2.5m wide and cost between $A60,000 and $A80,000 to buy and fit-out. A kitchen and bathroom are also installed, and a local company provide the vinyl wrap images for the vehicle.

“The funny thing is that they can only drive maximal 20 miles per hour – so low speed,” Aalt said. “You don’t need a special driver’s licence. We go from street to street or town to town from 10am to midday, and 1pm to 3pm.” 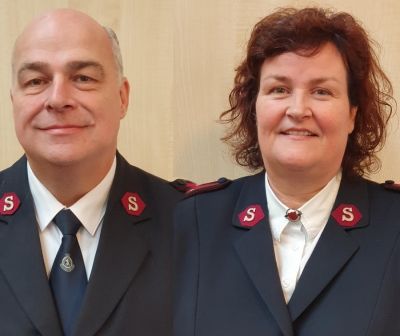 Captains Aalt and Tertia Fikse ... pioneering the work of The Salvation Army in the south of the Netherlands.

Large vehicles in villages were not an uncommon sight in the Netherlands. “In the early days in Holland, large vehicles with groceries drove in the streets, and people came in to buy things,” Aalt said.

Aalt said the vehicle was multi-purpose, with the ability to be converted into a campaign bus for “evangelism campaigns” and as an emergency services centre “in times of crisis”.

“We have about three to five people in the morning and same in the afternoon,” Aalt said. “These are all new people who we have never seen before. We pray with some. Sometimes just listen or help when there is a need.”

For the Fikses, pioneering work for the Army is in their DNA. Having grown up within the Army, Aalt, a former military policeman, and Tertia, a former hairdresser, became officers and spent about 15 years in Suriname, South America. They returned in 2007 and spent 10 years as corps officers, founding five new outposts along the way.

“Then the Army asked us to move to the south of the Netherlands three years ago,” Aalt said. “The Army is ’strong’ in the north but not so active in the south.”

He and Tertia are the corps officers at Treebeek Corps, which is in the district of Brunssum.

Aalt said he and Tertia had opened three ontmoetingswinkels – “These are thrift shops with coffee corners. The aim is spiritual” – and are in the process of opening in another two locations.

“The Army calls these ontmoetingswinkels spiritual locations so soldiers and adherents can become members there,” Aalt said. “We do not aim to have Sunday meetings, but we focus on spiritual growth during the week. We see our volunteers as our corps members.”

“We [the Army] fail to see that the thrift shop/coffee corner is much closer connected to society than the Sunday meeting. The focus of the corps should be on the coffee corner/thrift shop, where there is room for all kinds of spiritual activities. When we were thinking how to reach the people, the idea of an adjusted motorhome came up.”