You are here: Home › Global Focus › Guns And Violence Exchanged For Bibles And Peace

Guns and violence exchanged for Bibles and peace Guns and violence exchanged for Bibles and peace

Colonel Kelvin Alley, Territorial Commander, receives a gun from the Kepakanda tribe, as he gives away a Bible in the restorative justice exchange.

The Salvation Army Restorative Justice Program in Papua New Guinea has been instrumental in securing the symbolic surrender of guns, in exchange for Bibles, between two warring tribes in Enga Province after a decade of tribal fighting. 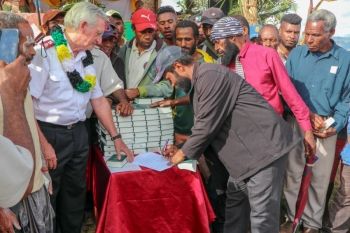 The signing of the peace agreement during the ceremony.

“By surrendering your guns, you are securing a future for yourselves – a future that God intended for all,” said Colonel Kelvin Alley, Papua New Guinea and Solomon Islands Territorial Commander, at the recent ceremony to exchange guns for Bibles in Kepakanda village in Kompiam District.

“It’s important to teach our children that our past does not have to define our future – that men and women working together shape your community for the better.”

During the ceremony, one gun from each tribal leader was surrendered to The Salvation Army to symbolise the peace agreement signing and to signify hopes for a better future.

Around 90 Bibles were shared between the tribes. 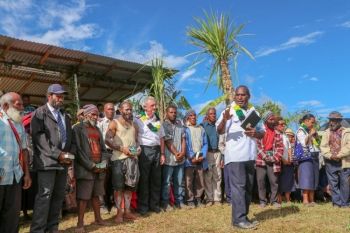 Captain Buka Misia addresses the people at the ceremony.

Through the Restorative Justice Program, with support from the Churches Partnership Program, The Salvation Army worked with people from the two tribes for peace negotiations, using Bible teaching to elicit social change, peace and stability.

The Salvation Army is among seven other mainline churches in Papua New Guinea that work together with funding from the Papua New Guinea–Australia Partnership to improve their organisational capacity, deliver basic health and education services, with current focus on five key areas: gender equality and social inclusion, peace and prosperity, disaster risk reduction, health and education.

In accepting the guns, Colonel Alley thanked tribal leaders and the churches for collaborating and taking a strong stand to build a safer, secure community. Lakaem (right) with her son Nik and her grandchildren.

Lakeam Mul, from the Puikin tribe, lost her husband during a tribal fight in 2009 and had to raise five children on her own.

“Life was very hard, we lived in fear but, despite that, this was my home,” she said. “I cried during the ceremony, not just for the husband I lost but for the future we are building for our grandchildren.”

During the ceremony, Lakeam’s son Nik represented their tribe and presented a homemade rifle to The Salvation Army and publicly affirmed the peoples’ desire to end the fighting and work towards a peaceful existence.

Two boxes were also provided to enable the previously warring tribes to put in items signifying their hopes for the future.

Representatives from The Salvation Army, other churches, and the Australian High Commission, the Kompiam District representative, and the District Police Commander, also attended the ceremony.